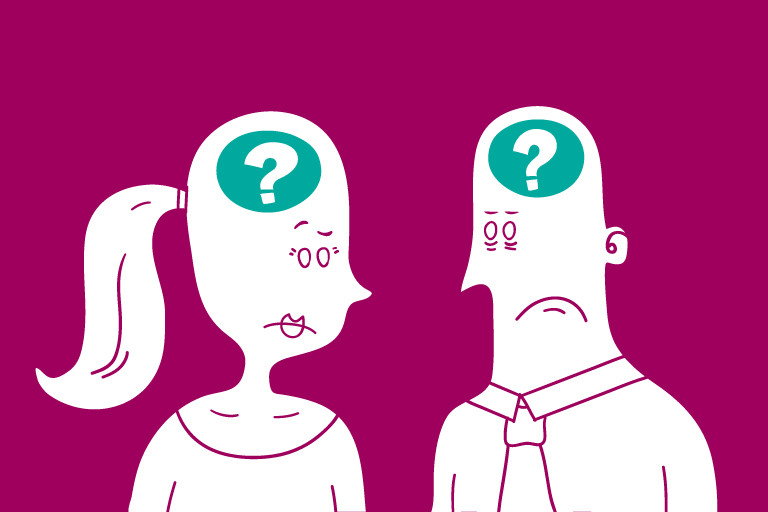 We reveal the reasons behind some gender-based quirks.

Why will he spend five minutes precariously balancing a banana skin on top of the trash rather than empty it?
Forget UFC: Real men test their masculine abilities on an overflowing trash bag. “When a bag is piled high, getting it tied up and out of the house is a better test of a man’s spatial skills,” says communications guru Allan Pease, co-author of Why Men Don’t Listen and Women Can’t Read Maps. “A man is thinking: ‘Can I get the sides up without spilling any of the contents, get the contents evenly distributed so it doesn’t break and get enough spare plastic at the top to make a secure tie?’ That’s a challenge to get a thrill out of–a nearly-full bag is boring.”

Why is the presentation of a gift as important to her as what’s inside it?
God is in the details–or so they say. And Lord help the man who wraps his wife’s expensive gift in newspaper. Why can’t she just be grateful? Because it’s not just about the present; it’s about communication. “When a guy is inscrutable, unfathomable or there’s a lack of communication, this leads to insecurity and a desire to overanalyze,” says Ian Kerner, author of She Comes First: The Thinking Man’s Guide to Pleasuring a Woman. “As a result, women often try to read a guy’s emotions from his actions.” Problem is, instead of teaching that it’s the thought that counts, our culture promotes the idea that bigger is better, and so men focus on the cost or size of a gift. Ladies, tell him again: Size doesn’t matter!

Why can’t he find the keys when they’re right in front of him?
“We have done studies where we place items in a simulated home environment and then test people on location memory,” says psychology professor Robin West of the University of Florida. Women outperformed men on the task, she says, even though men were more confident of their ability to remember. Researchers aren’t certain if this difference is due to the brain’s hard-wiring or learned behavior; either way, getting him to always leave the keys in the same place will at least help you to help him find them!

Why would she rather sew up her eyelids than go public in a bikini?
“For many women, wearing a bikini is a form of flirtation,” says John Gray, author of Venus on Fire, Mars on Ice. “It’s a physical display, a way to attract potential mates. If their partner was seen flirting with another woman, they’d get extremely upset, so they themselves avoid encouraging sexual attention in an effort to ensure that their partner doesn’t.”

Why can he recall an obscure 70s band but can’t remember our anniversary?
“Emotional memories such as anniversary dates are triggered by estrogen, whereas the ability to recall facts utilizes testosterone,” says Pease. “This effect is so powerful that if a man has to receive hormone therapy–if he has prostate cancer, for example–he’ll become better at remembering emotional events and less able to recall data.”

< Confessions Of An Ex-Micromanager Chemistry Class: The Science Of Desire >