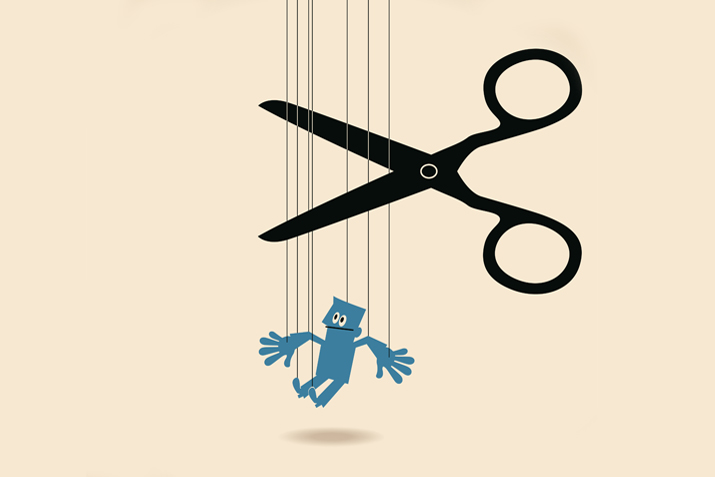 It is exhausting and under-appreciated work, being a micro-manager. So after decades of dedicating my heart and soul to it, I am throwing in the towel and giving up.

This was not an easy decision. I have been micro-managing practically my whole life. I first cut my teeth as an older sister. By the age of 8, I was able to direct my sibling with the skill of an army general to play Snow White to my evil Queen–that is until she figured out that while she may be four years younger she was also four inches taller. One day she decided that she had had enough, pummeled the crap out of me, and reduced me to the status of a dwarf.

My micro-management skills lay dormant for some time after that; I was officially on sabbatical waiting for my next big break. And eventually I was given a second chance. With marriage came the next perfect opportunity. With a renewed sense of purpose, I dove back into a role that was clearly my calling.

It was abundantly clear that my husband could benefit enormously from the micromanagement skills I brought to our union. Sure, he may have come with a bunch of academic letters after his name, and the ability to competently dress, feed and take care of himself–but, without my skilled intervention it was unlikely he could figure out much on his own. This became even more apparent when kids came along.

Without my talented orchestration of the minutiae of our lives, there was too big a risk that he would not realize we were out of orange juice, that the kids needed to be woken up by a certain time, or that he should call his sister to work out plans for his family’s Christmas. So of course I had to spell all this out for him–slowly and in big block letters.

Of course, the more I micromanaged, the more he needed to be micromanaged. This was further validation of how invaluable I was to him and to our marriage. When I let my guard down for even a moment, he would mess up. Despite his ability to scale mountains at work, he was clearly parking his brain at our doorstep.

But it was the onion that finally did me in. Yes, that darn onion. It put into question my ongoing relevance as a micro-manager.

Early in our relationship cooking was a shared passion. But with the arrival of kids, we had to “divide and conquer” if we were going to survive. Cooking became “mine,” and my husband became my occasional “helper.” But how he helped drove me crazy. How was it possible for me to have prepped the main course, made a salad and whipped up dessert in the time it took him to chop one damn onion–and with the wrong technique, I might add. After years of seething, I finally called him on it.

He put the question firmly back in my lap. Is working in the kitchen really about efficiency or is it about spending time together? Is it about being stressed to meet an arbitrary deadline or feeling relaxed sipping wine and working at our own pace after a long day? Is it about competing about who is lifting more weight or about cooperation based on individual talents?

As with my sister, I had finally gone too far. It was time to hang up my apron as a micro-manager. I now let him chop that onion any damn way he wants and on his own timetable. And when he is done I stand back, admire the perfectly diced onion and say with sincerity, “You look so darn sexy with a sharp object in your hand.”

filed under: advice, marriage
< Sex Toys You Can Make At Home Revealed: Reasons Behind Your Partner’s Annoying Habits >