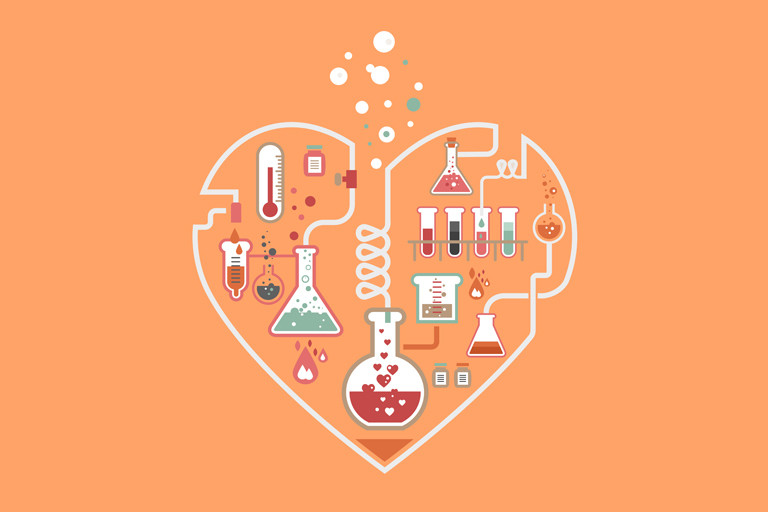 Chemistry Class: The Science Of Desire

Who can really explain what makes someone attracted to another person? What makes two people really click? Well, sexed-up scientists are finding some interesting answers.

It’s romantic to think that destiny brings lovers together, like you see in the movies all the time. But what if there isn’t some grand design that we are powerless against but our very own bodies? What if we are physically hard-wired to know exactly what kind of lover to look for, and just how to ﬁnd them? And what if we’re so well programmed that we don’t even have to think to know who is most compatible?

Though it may seem decidedly unromantic, scientists are discovering that many of those delicious feelings that come with the hunt and capture can be explained by hormones and neurochemicals. Sure there are people who are nearly universally attractive, and an encounter with them can get your pulse racing, but that doesn’t necessarily mean sustained chemistry.

Indeed, some are suggesting that desire doesn’t start in the eyes, brain or lap but rather our nose. It turns out that we may actually be able to “sniff out” good partners. The theory is that we ﬁnd speciﬁc people’s smells appealing because their genotype (a.k.a. genetic makeup) is different from our own. From an evolutionary perspective, we’d be more likely to produce healthy babies if we mate with someone genetically different from ourselves.

But that’s jumping a few guns. Before there are babies—if there are babies—there is all that delicious ﬂirty stuff. Consider, for example, a deep, husky voice murmuring softly in your ear. That’s almost universally appealing. Well, there may be something scientiﬁc about that too. Apparently, those who have an enhanced libido boast a higher testosterone level (yes, both men and women), and this hormone lengthens their vocal cords, causing a deeper tone and signalling their sexuality.

And remember that rush and desire that blossomed at the start of your relationship, when you couldn’t keep your paws off of each other? That may be true love, but it’s also elevated levels of dopamine in your brain, which boosts feelings of pleasure. But it’s just like a drug: We require more and more to feel sated. As that initial ﬂame dies out, the relationship may end or two other chemicals, called vasopressin and oxytocin—a.k.a. the cuddle hormones—will kick in and a long-term bond can be forged.

Though science might provide us with some fascinating ideas to chew on, when it comes to sex and love, nothing is simple. The society we live in, the way we were raised and our past experiences all have a hand in our sex lives. And though the idea of some kind of unseen force ushering us to our ideal partners is lovely, it’s not entirely enough to explain it all.

And anyway, a little bit of mystery is really sexy.

filed under: sex, study
< Revealed: Reasons Behind Your Partner’s Annoying Habits How To Get Busy On The Beach >