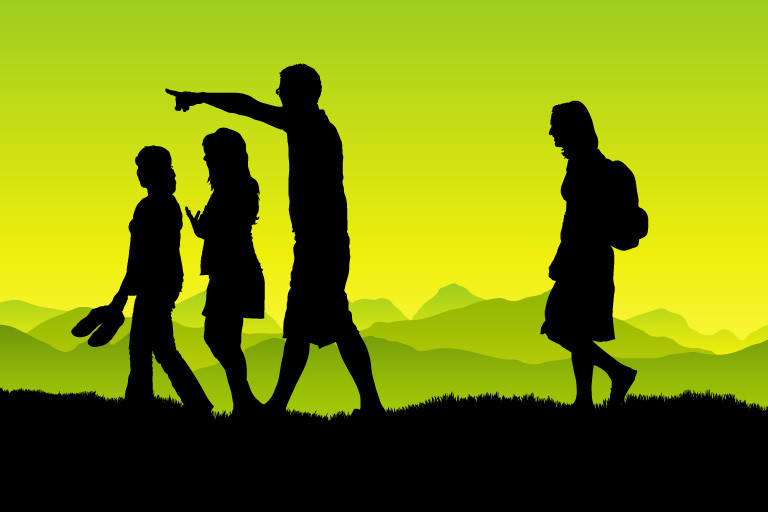 Advice To Step Parents From My Inner Teen

My sister and I were teenagers when our dad fell in love with another woman, left our mother, and got re-married.I had not thought about this “other woman” for decades. When her marriage to my dad vaporized so did my relationship with her. She re-entered my consciousness recently as more of my friends are falling in love with parents of teenagers.

As some of my friends have discovered, being a step-parent is often no picnic. Studies have shown that the higher divorce rates in second marriages can be in part attributed to the presence of step-children.

But it’s not only the marriage that takes a beating; step-children also have a rougher time at home and fly the coop earlier than kids who don’t live with a step-mom or step-dad.

My sister and I were lucky. Looking back, I think my dad’s partner did a fine job navigating the choppy waters of being a step-parent.I have a better appreciation now of what a tough slog it must have been for her. It’s not easy figuring out a relationship with younger people who are appendages to the one you love.

Thus, my inner teen would like to offer some “don’ts” to step-parents-in-training.

Don’t parent.The fewer “parents” a teenager has the better. It is hard enough rebelling against your real parents, let alone ones who join the party late. If you want to avoid short-sheeted beds, or dead mice in your sneakers, best to stay out of the discipline department. Sure, it’s hard to bite your tongue when your partner’s kid trashes the place while you are out of town, or decides to take a gap year on your couch — but that is why there’s a special place in Heaven just for you.

Don’t be needy. It’s not uncommon for step-parents to feel insecure vis-à-vis their step-kids. Teenagers can smell this need for acceptance and approval — and will circle like sharks around a piece of bloody flesh. Teenagers have enough insecurities of their own; they don’t want to deal with yours. Remember, they didn’t choose you, you chose them as part of the package deal with their mom or dad. Be cool, let them warm up on their own terms and timetable.

Don’t crowd the ex. The “ex’s” enjoyment of their kid’s school plays, recitals, sporting events or graduations can be seriously diminished by feelings of jealousy or hostility when they see you (their “replacement”) there. Teenagers are sensitive to these weird dynamics and it can ruin their good time too. If you feel negative vibes from your partner’s ex (or teenager), stay home. You can beg to watch the video later.Trust me, you won’t find it that interesting.

Don’t always tag along. Teenagers are prone to existential angst (really just a junior version of their parent’s mid-life crisis). Even though they act like they’d rather die than be seen in public with their parents, they actually crave being the center of their universe. This is easier when they are not competing with you for their parent’s attention and affection. Give your partner and their kid ample alone time. You’ll appreciate some peace and quiet too — an opportunity to catch up on the extra laundry your step-kid has generated during the week, or to take command of the remote control to watch something other than The Vampire Diaries.

Don’t play the “ME” card. Never ask your partner to choose between you and their kid no matter how badly you want to be numero uno. Being in a relationship with the parent of a teenager means major sacrifices. Be prepared to: spend precious weekends schlepping to activities that bore you to tears; listen to music that gives you a migraine; open your fridge to a tribe that always seems only moments away from starvation; and, soothe teenage angst when you’d rather bonk them on the head for being such self-absorbed twits.Unless you can see the humor in all of this, you may not be step-parent material.

Let’s face it. If parenting teenagers is hard work, step-parenting them is even harder. It takes a whole lot more patience, tolerance and sensitivity to get through the teenage years with kids that are not of your own making.

filed under: advice, kids
< Beware: Kids Take All The Fun Out of Halloween What Goes Around Comes Around >