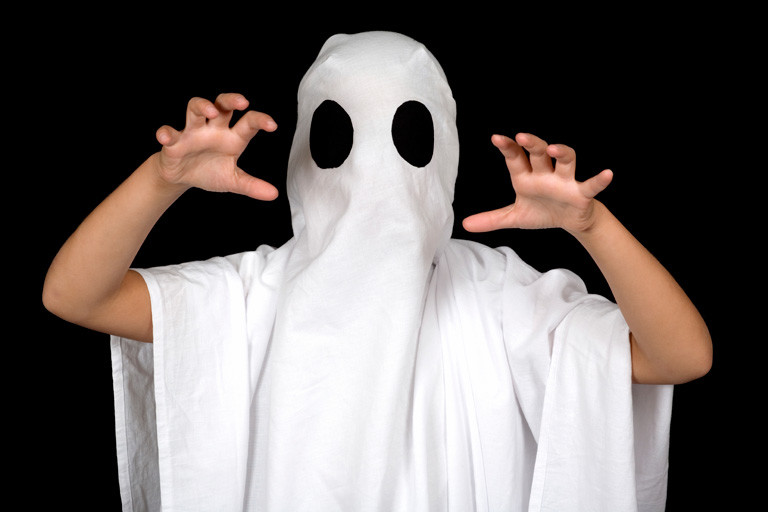 Beware: Kids Take All The Fun Out of Halloween

My husband and I used to love Halloween. Then we had children.

Our first Halloween as parents wasn’t so bad. My son, a mere 6 months old at the time, was dressed up as a giraffe and was shown off to our parents and a few of our neighbors down the street. Everything remained pretty normal if you don’t include the fact that at one point in the evening I had a giraffe hanging off my boob. Fine. Things change a bit when you have kids. I get it.

But the following year my then 18-month-old son knew what was up. Costumes? Candy? Does it get any better? And that’s when it happened. That’s when I asked the question that would seal my Halloween fate for all of eternity: “What do you want to be?”

Looking back, it was my fault. We didn’t expose our children to “mainstream” television. “We don’t have cable,” we explained to our friends, “our children only watch public television programs. They’re very educational.” So it should have been no surprise when my son insisted on dressing up as a completely obscure character from one of his favorite public television shows. What did I expect?

At first, I felt pride. I imagined my child, the non-conformist, bravely going door to door, accompanied by his mother (braver still) who would gently explain his costume when the neighbors asked.

Understand, I had no intention of making this costume. After all, there was bound to be another parent somewhere out there who shared my superior set of television values and was selling the costume on Etsy. And I’m sure I could get the costume for…one hundred and twenty five dollars?! This parent may have shared my views when it came to TV, but obviously they did not share my sense of thrifty living.

It was decided then. I would have to make this costume by hand. The funny thing about making a costume is that you convince yourself during the process that it looks good. You keep telling yourself, “It doesn’t look anything like it now, but when it all comes together…” as if putting individual pieces of crap together on one kid would make it magically become…not crap. There is also always one finishing-touch item which you’re sure you can buy to complete the look. It might be a hat or some accessory that you’ve “seen a hundred times at Dollarama.” However, when you try to find said item it has completely vanished from the shelves and will take 6 to 8 weeks to ship from China.

You get where I’m going with this, right? Two days before Halloween and I’m searching for a costume at Walmart.

So now you have a terrible, half-handmade, half-Walmart costume, but it’s not just the crappy costume that ruins Halloween. Now you are a parent. You know how hard it is to keep sugar-filled treats away from your kids. So you have to make the decision: Do I want to be the cool parent on the block and give away full-sized chocolate bars or do I want to be the respectable parent on the block who gives away Welch’s fruit snacks? (You go with the chocolate bars and have to endure parent after parent giving you annoyed glances for the rest of the evening.)

Also, your kids are crazy jacked-up on sugar and will not go to bed.

So that’s Halloween now for my husband, for me and for millions of parents out there. I’m not trying to be a martyr here, I’m just telling you how it is. I’m hoping that all of you single or newly married people will enjoy Halloween while you still have it. And when you see my kid at the door wearing some poorly-made costume that you can’t identify, give me a sympathetic smile.

And hey…dropping an extra Mars bar in the bag for Mom wouldn’t hurt either.

Kara Kootstra hates work. As luck would have it, people seem willing to compensate her to write children’s books, teach piano lessons and make gourmet cupcakes. A happily married woman (except for when her husband makes fun of her for reading Twilight), Kara is a mother to Claire, a girl who wears fairy wings to the grocery store and Nate, a four-year-old who is famous for his use of wordplay.

< WATCH: A Fang-Tastic Halloween Music Video For Kids Advice To Step Parents From My Inner Teen >