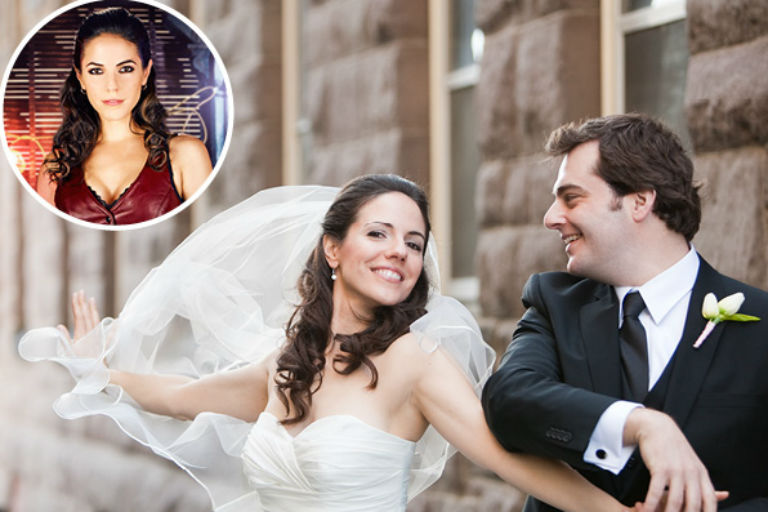 The love story between Lost Girl‘s Anna Silk and hubby Seth Cooperman plays out like some far-fetched rom-com: Boy meets girl; boy falls for girl, but girl is dating another boy. Cut to sushi bar a year and a half later: Girl flirts with boy; boy can’t believe his luck.Boy and girl fall madly in love.  Two weddings, one conversion and a hit show later, and boy and girl can (finally!) enjoy their Hollywood ending.

On Lost Girl, Anna plays supernatural seductress Bo, who feeds on the sexual energy of humans. At home, she feeds off the comic energy of her “new” hubby, actor/writer/house comedian Seth. In addition to the Showcase series, you may also recognize sexy, sweet Anna from movies (Confessions of a Dangerous Mind, Breakfast With Scot), TV (Being Erica, Ghost Whisperer) and commercials (remember the cranky flight attendant in those Nicoderm spots?). 2 caught up with these thesps-in-love to peek behind the scenes of their relationship.

On how they met…
Anna says… “It was friendship at first sight. We met in an acting workshop in 2007, shortly after we’d both moved to Los Angeles (Seth from New York and me from Toronto). I remember seeing him on stage and thinking, ‘He’s really funny–and cute!’ But I was in a relationship at the time, so we were just instant friends.”
Seth says… “For me, it was lust at first sight! I’m sitting in this classroom, brand new to LA, and in walks Anna. I just knew I had to meet her. I asked her out, and over coffee, she told me she was dating someone.”

On friendship turning to romance…
Anna says… “It all changed over sushi: We were having dinner in Hollywood and, in one moment, we both kind of looked at each other and thought, ‘Oh my God, what are we doing?!’ We just realized it was right and have never looked back.”
Seth says… “That sushi scene: If you saw it in a movie, you’d think that never happens in real life. We were drinking sake and laughing. (I think I was particularly funny that night.) Then Anna turned to me, and I saw it in her eyes: There was an attraction. Of course, I’d been attracted to her from the beginning but had come to terms with being just friends. When I realized she was flirting with me, I was like, ‘Whoa!’ It took me a few minutes to wrap my head around the idea that the most beautiful woman I’d ever met was attracted to me.”

On Anna’s conversion to Judaism…
Seth says… “I’m Jewish, and my faith has always been very important to me. I’ve dated non-Jewish girls in the past and I always felt strongly that they would convert if the time came. But Anna was the first woman I dated who I didn’t care if she ever converted; I wanted to be with her regardless.”
Anna says… “Judaism is such a big part of who Seth is, and I love that about him. When we began dating, I started to think about converting, and it just naturally evolved. We’d go to friends’ places for Shabbat dinners and holidays, so I was learning without even realizing it.”
Seth says… “Anna was never really devoted to any one religion, so it was less about giving something up and more about embracing something new.”
Anna says… “We actually took the conversion classes together. It really bonds you as a couple. You think about a lot of life’s big questions, which is important for any couple who are about to get married. Though I think maybe Seth took the classes just so I wouldn’t know more than him!”

On their wedding(s)…
Seth says… “We actually got married twice. The first time was in December 2009 and was sort of like, ‘Let’s get ‘er done!'”
Anna says… “The plan was not to tell anyone, but within two days, we were telling everyone–and the wedding rings probably gave us away! Then we had our big, fat Jewish wedding on April 10, 2011. I think we incorporated every Jewish tradition known to man–including a 23-minute hora!”

On similarities between “Bo”, the character, and Anna…
Anna says… “Bo is tough on the outside but vulnerable and scared on the inside. And I’m scared most of the time, too! Acting is a rough industry. I have to put myself on the line and stand up for what I believe in–and that’s what Bo does, too.”
Seth says… “Anna and Bo are very alike: strong-willed, caring and protective of their loved ones. They’re both also beautiful (of course) and sensual!”

On Lost Girl‘s steamy sex scenes…
Seth says… [laughing] “I actually think I’m better with it than Anna would be if our roles were reversed! It’s a job, it’s not real, I get it. But there was one scene that got to me. I don’t know what it was but I had to pause and leave the room. She was actually kind of happy that I believed her chemistry with her co-star. And I was thinking, ‘Congratulations, you’re a great actress, but can we please deal with my feelings for half a second?!'”
Anna says… “At first I felt bad–I never want my husband to be uncomfortable–but then the actor in me was like, ‘Yes! We totally pulled it off!'”

On having kids…
Seth says… [to Anna] “Are you pregnant, sweetie?”
Anna says… [laughing] “Um, no!”
Seth says… “So not in the next nine months. But I think soon. We just have to dance the dance between seasons of the show. But you never know: There may be a pregnant Bo for Season 3–maybe seasons 3 and 4 since we’d like two.”
Anna says… “We talk about it a lot, and it’s something we want in the near future. But for now, we’re really enjoying the experience of the show and being not-so-new newlyweds!”