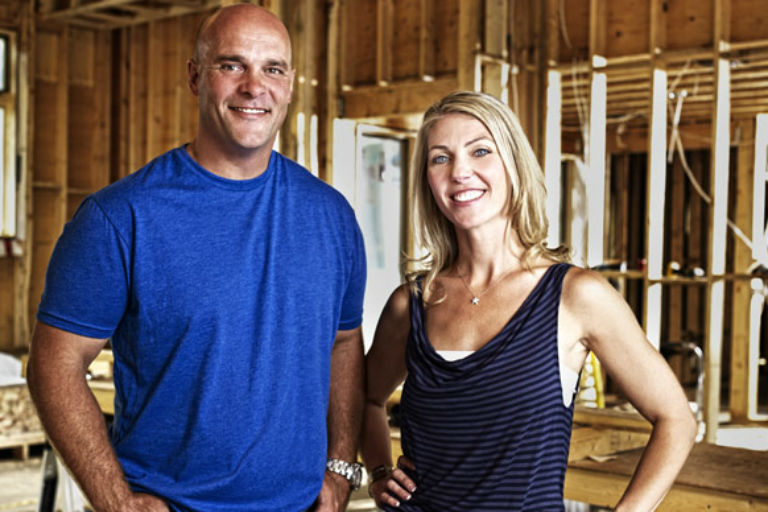 Bryan Baeumler, host of HGTV Canada’s Disaster DIY and Leave It To Bryan, has starred with his wife, Sarah, on House of Bryan–one documenting the process of the couple building their dream home; the other, their fantasy cottage in the wilds of Georgian Bay. If all that isn’t enough to keep them busy, the couple also have four young children—Quintyn, Charlotte, Lincoln and Josephine. We caught up with the Baeumlers to find out how they juggle it all.

On how they met:
SARAH SAYS… We went to the same high school. I was in grade nine and he was a little older.
BRYAN SAYS… Sarah’s sister is the same age as me and was dating a good friend of mine, so I would see her around.
SARAH SAYS… We always traveled in the same circles and then it was after university when we were both working–
BRYAN SAYS… –Ten years later when she was legal.
SARAH SAYS… [Laughing] Bryan asked me out. There was a group email and I was on it, and he sent a quick email saying, “How’s it going? How’s your sister?”

On their first date:
BRYAN SAYS… It was a very innocent, “If I’m in the neighborhood, we’ll grab a coffee one day.” I don’t know how the hell it turned into a $200 sushi dinner and a night at The Lion King.
SARAH SAYS… It was one of those dates where you already felt like you knew the person so well. We sort of jumped from getting to know one another to already feeling comfortable. Then we went to Georgian Bay where we just built our cottage [House of Bryan: On the Rocks].
BRYAN SAYS… That was our second date.
SARAH SAYS… So, that’s why we fell in love with that area and it means a lot to both of us because we’ve been up there since the beginning of our relationship.
BRYAN SAYS… [Laughing] I have a lot invested in that area.

On their wedding:
BRYAN SAYS… It was like Will and Kate’s.
SARAH SAYS… [Laughing] We had a small wedding. We were pretty adamant that we wanted only close family and friends. It was beautiful.

Pictured with their three kids before their fourth, Josephine, was born.

On the best gifts they’ve exchanged:
SARAH SAYS.. This is a hard question because he’s going to say I don’t get him anything.
BRYAN SAYS… What did you give me as a wedding present?
SARAH SAYS.. My love for ever and ever. What more could you ask for?
BRYAN SAYS… You got me a gift card once.
SARAH SAYS… [Laughing] My favorite gift from Bryan is when we go to the ballet. He does not have a love for it. But he will go and sit through it.
BRYAN SAYS… And take a little nap…
SARAH SAYS… When he gets tickets for the ballet, he’s saying, “I’m putting you first. I don’t want to do this, but I know how important it is to you.”

On keeping their relationship harmonious during all the renos and builds they’ve been through:
BRYAN SAYS… We fight a lot. I shouldn’t say a lot, but we’ve had some good zingers.
SARAH SAYS… I’m always amazed when people make comments about how we argue or things we fight about because I can’t picture a couple going through such a huge build together–emotionally and financially–and not arguing.
BRYAN SAYS… With the first house, Sarah’s idea of home-building was that I leave every morning and come home with a mitt full of money and somebody has a house. So, when it was up close and personal, it was a shock for her how chaotic it is and how quickly decisions have to be made and how much money goes flying out the door.
SARAH SAYS… We sort of learned to pick our battles–what is important and worth arguing about and what two years down the road we won’t think is a big deal. With the first home, every item was a huge deal. By the time we got to the cottage, I had learned a lot about what was worth fighting for and what just to let go.

On life with four kids:
SARAH SAYS… I don’t know how that happened!
BRYAN SAYS… I say “Yes dear” a lot… and I drink.
SARAH SAYS... [Laughing] A big family is nice to come home to. And with Bryan being in the public eye, his family is important. That’s his escape from the television world. A big welcoming family is something he looks forward to.
BRYAN SAYS… I get attacked when I get home. The kids come running and it’s fun.

On how they like to spend “couple time”:
SARAH SAYS… Food’s always a big thing. We like to enjoy a good meal with friends.
BRYAN SAYS… We travel when I do appearances and when it’s Regina or Prince Albert, Sarah’s usually busy, unfortunately. But when it’s New York City or Miami or Vancouver, her schedule miraculously opens up.
SARAH SAYS… I’m right there!
BRYAN SAYS… We like to travel and explore, especially New York City.
SARAH SAYS… It’s one of our favorite spots.