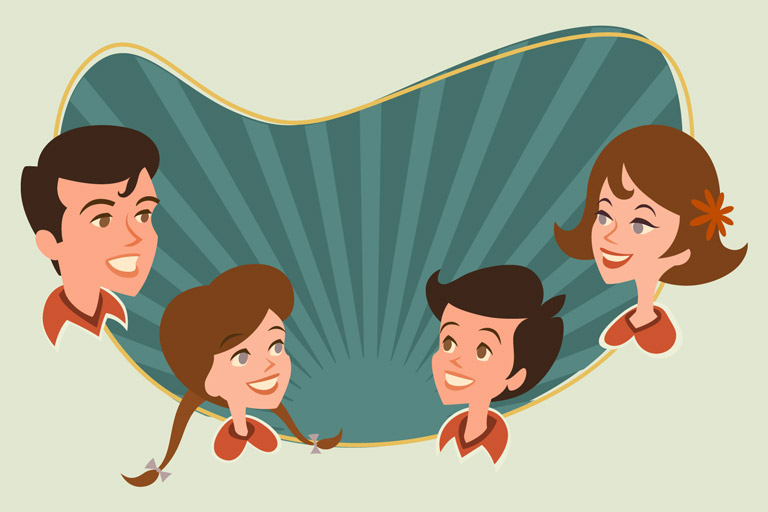 Certain comeback kids have been getting a lot of buzz lately—names like Elsa and Amelia and Elias and Tobias, all of which have that nice vintage 19th century vibe. But there’s another group of names inching their way back that you might find a bit more surprising. Mostly midcentury mom and dad names, they are flouting the Hundred-Year Rule, returning way before their expected due dates.

Here are a dozen prime examples of comeback baby names:

Cindy—Yes, Cindy, as in the baby of the Brady Bunch. Cindy rose 82 places last year, rising from her lowest point in recent history. This pet form of Cynthia and Lucinda first came onto the list in 1938, and within 15 years had entered the Top 100, peaking at Number 19 in 1957 (representing more that 20,000 baby Cindys), very much in the Mindy, Stacey, Tracy, Randi, Ricki cheery cheerleader zeitgeist. So is this just a blip, or will we be seeing more baby Cindys?

Elaine—Elaine may date back to the days of Camelot, but to most of us it has more of an Elaine Benes image, and so I’m wondering what was behind its 105-place advance this year. Was she a beneficiary of the current love for all names El—from Ella to Elle toEloise to Elsa to Eliza? Ellen and Eileen, by the way, also saw significant gains.

Joyce—Joyce, which started life as a male name, saw a double-digit rise, its first upward movement in decades. It was in the girls’ Top 100 for 43 years, topping at Number 11 for a couple of years in the thirties. It’s now associated with writers of a certain age like Joyce Carol Oates and Joyce Maynard. Cousin Joy also saw a slight rise.

Linda—This couldn’t surprise me more, my name moving up 24 places. Linda did famously unseat the perpetual Mary for the Number 1 spot—but that was in 1947! (On a personal note, my two almost-names, Laurel and Lydia, also rose on the charts this year.)

Lisa—Another name that once reached the top spot, reigning from 1962 to 1969, when this Elizabeth diminutive was given to around 50,00 baby girls in each of those years, Lisa had a fairly rapid fall. But now we’re seeing some small signs of an uptick, indicating that the tide just may be turning. There are, of course, many prominent Lisas around, including the iconic Lisa Simpson.

Myra—A poetic invention of the 17th century, Myra was in the US Top 150 in the 1880s, started sliding in the 60s, fell off completely in 2004, then suddenly made a return in 2009, and this year moved up 135 places to Number 638. Could any of this be due to her minor role in the Divergent series? Or her resemblance to other 4-letter names with a y, like Lyla, Anya, Arya, Ayla, Maya, Nyla et al?

Bruce—Is Bruce back? He’s now at his highest point since the mid-90s, just outside the Top 400. One of several Scottish names that were considered cool from the 40s to the 60s, such as Douglas and Craig and Keith, Bruce is the human name of two superheroes—Batman and The Hulk—and seems to have begun appealing again to parents seeking a single-syllable name with history, as also with Clyde and Clark.

Gary—Up 18 places this year, Gary managed to crack the Top 10 in the early 1950s (thanks to the enduring fame of Gary Cooper, stage-named after the Indiana city), but we can’t quite see that happening again. Does this mean we’ll also be seeing a return ofCary, Barry and Larry? Also rising: Gordon and Grant.

Harold—Harold, which rose almost 60 spots in 2014, had developed a dowdy image that contradicts its distinguished early royal history. A Top 20 name in 1900—he was the typical teen in the comic strip Harold Teen, Harold has been in freefall for a long time, almost dropping off completely. Current namers might be attracted by his cooler nicknames Harry and Hal. Howard, Hank and Hughare other H-boys gaining traction.

Jay—As May and Fay/e rise for girls, brother Jay is seeing a bit of an upturn as well, climbing 18 places last year. In the recent past,Jay was superseded by more elaborate forms: first Jason, and then Jayden, Jaylen et al. For the record, Jays Gatsby and Leno were born James, Jay-Z was Shawn.

Julius—Yes, it’s an ancient Roman name attached to the greatest emperor of them all and to several popes, but Julius is also the guy who does your uncle’s taxes, explaining why many more parents prefer the softer sounding Julian. On the other hand, Julius has caught the wave of ancient Latinate us-ending names, and has risen 38 places this year to a respectable Number 309. Lucy Lawless chose it for her boy and it’s the son character on Happyish.

Russell—Russell was mega-popular in the 1950s and 60s, meaning that there are a lot of middle-aged Russes out there on the golf course. But after a deep dip, red-haired Russell is seeing a slight upturn, along with golfing partners Ronald and Roland.