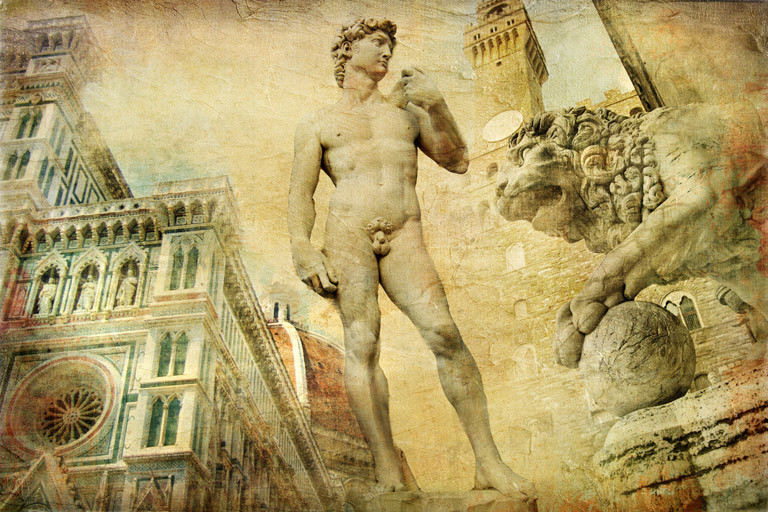 You Are A Masterpiece

I just completed a whirlwind tour of Florence. Bargello, Uffizi, Duomo, San Marco and Acadamia all in one day. I wouldn’t recommend this as a travel strategy. But my planning (and I use this term loosely) got totally tangled with a national holiday and museum closures. There wasn’t much choice but to cram everything in like a manic American tourist.

Bellini, Donnatello, Caravaggio, and a million other Byzantine, Renaissance, and Baroque artists have now all blended together as a messy mosaic in my mind. If you were to administer a pop quiz right now on Italian Art History I would flunk.

But there is one masterpiece indelibly etched into my memory–Michelangelo’s David. I could not take leave of his chiseled beauty.

Michelangelo used inferior marble to create David (a factoid I did not know until yesterday). Two other artists had begun their own sculptures with the same block of marble but its porous quality defeated them. Michelangelo’s raw material was damaged goods but in his hands it yielded a masterpiece. David’s flaws from the veins and cracks in the marble have only made him more human.

We are all slabs of genetic marble–smooth in some spots, rough in others. Like David, our flaws make us human. So why do we spend so much time trying to hide them? Indeed, it takes a special kind of courage to recast our “faults” in a shiny new light.

A young black Toronto woman, Chantelle Brown-Young has vitiligo, a rare skin condition that caused very large white patches on her face and body. Growing up she was bullied and called “zebra” and “cow”. She had suicidal thoughts but the resilience to prevail. She is now an international model, a former finalist on America’s Next Top Model, and a motivational speaker on discrimination. She says, ‘I loved myself. And with that, opportunities start to fall into my lap. And I thank God for all of them. Try loving yourself.’

It takes so much negative energy to combat our God given traits. I often fight with my reflection in the mirror, as do so many other women I know. If we can go beyond merely accepting our physical looks to proudly loving them, we can shift standard definitions of beauty through our own example.

David is a masterpiece. And so are we.