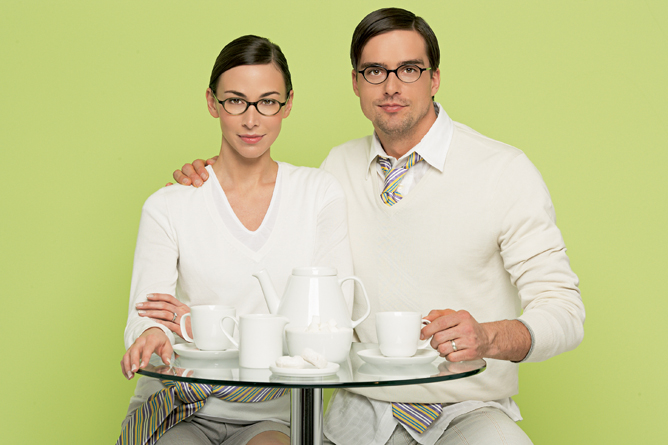 How to Tell If You’re Becoming a Clone Couple

You’ve seen them before–the couple in the coffee shop dressed in matching sweaters, their legs crossed the same way and drinking identical lattes. Are you becoming a clone couple, too? Here are five telltale signs.

1. Your husband has had a few too many drinks at a party, and although you’re pretending not to know him, strangers are still able to link the two of you, despite the lampshade that’s hiding his face.

2. You only need one menu at a restaurant since you both always order the same thing.

3. It’s your wife’s birthday, and you’re teasing her about the new wrinkles she has acquired over the past year…until she turns the mirror on you, and you find you’ve got the same lines!

4. You and your husband leave the house in a rush and don’t realize until later that you’ve put on each other’s sweaters–they’re almost identical!

5. When they see a pic of you both, people tell your parents they have a beautiful son and daughter.

Meet an extreme clone couple
There are clone couples and then there are extreme clone couples. Like Joey and Mel Schwanke, a couple from Nebraska that owns 146 custom-made matching outfits and have been wear­ing them every day since about the mid-1970s. The sartorially synched couple have been married for over 65 years and credit the success of their relationship in part to their matching wardrobes.

Have you downloaded the 2life app yet? It is a perfect way for couples to stay connected and organized. Chat, share, collaborate and coordinate with your partner, all in one colorful, easy-to-use app. Download now, it’s FREE!