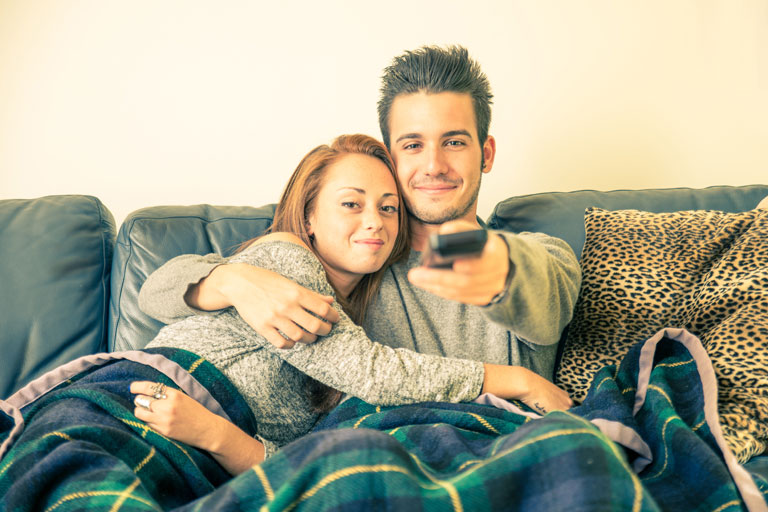 Yesterday, after dinner, my husband announced, “I’m going to watch the basketball game,” and headed to the basement. The Toronto Raptors were playing the Portland Trail Blazers. My husband is a huge hometown fan. Since the start of the season I have been hearing random bursts of “YES!!!” emanating from downstairs as the Raptors sink another impossible basket. These yells are so wild they often make me (and our dog) jump.

But halfway up the stairs, I changed my mind and turned around. I went to the basement to join my husband, and snuggled in beside him on the couch. I’m not an enthusiastic spectator of basketball but a recent study by Netflix convinced me it was time to make an effort.

Netflix surveyed more than 1,000 18-39 year olds, and roughly one-third said ‘show compatibility’ is important in a prospective partner; one-quarter said they find potential partners more attractive based on the shows they watch. But here’s the kicker: slightly more than one-third of men said they would likely get smitten based on similar tastes in shows and movies.

My husband and I are older than the survey participants and well past the dating scene–but the results are still relevant to our long-term married situation. We naturally gravitate towards different things. He’s a runner; I do yoga. He loves going to classical concerts; I like plays. He watches The Raptors; I am addicted to documentaries on Netflix.

But we believe that being a couple means keeping up with each other’s interests–even if it’s not fascinating to us. This means my husband joins me at plays, and I am his date at classical concerts. I will go to his running events to cheer, and he will join me in downward dog at the yoga studio once a week. And, yes, I’m now making an effort to watch the Raptors and ask questions about the players and their plays.

Being our own person is important. It would feel boring (and suffocating) if we did everything together, had all the same hobbies, shared only the same friends–and watched only the same shows on Netflix. Some autonomy is good, even as a duo.

But making an effort to become familiar with what excites the other, lets us share in their joy–and sometimes their interests grow on us too if we give it a chance. It’s another point of conversation and connection. This morning I did something new. I picked up the Sports pages. The Raptors are ranked highly in the Eastern Conference! (And, I’ll be sure to ask my husband all about that!)

< Is Your Partner’s Ex Driving You Crazy? 3 Ways You Can Make It Stop 10 Tips For Planning Your Wedding Together with 2life >