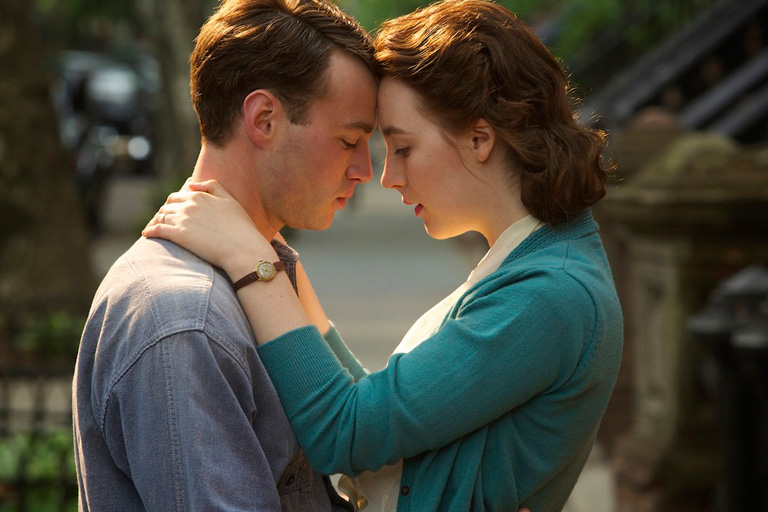 The Irish Names of “Brooklyn”

Whether or not you’ve seen the touching new movie Brooklyn, based on the Colm Tóibín novel, you’re probably aware of its award-winning star, Irish actress Saoirse Ronin, and maybe even know how to pronounce it. The name of her character in the film is Éilis Lacey, another name with a surprising pronunciation and appealing sound.

And there are other Irish names associated with the production, including those of the other actors, characters and players behind the scenes, that are well worth noting and considering–several with rich histories in Celtic mythology.

Here they are, with their pronunciations:

Aine (Awn-yeh) – Pronounced almost exactly like Anya, this original form is very popular in Ireland, ranking in the Top 70. Aine was the queen of the Munster fairies and appears in folklore as an early Celtic goddess of summer and prosperity, and has the lovely meaning of ‘brightness, splendor’.

Bébhinn (Bay-vin) – Anglicized as Bevin, (and sometimes as Vivian), this girl’s name meaning ‘fair lady’ was borne by both the mother and daughter of the great Irish high king Brian Boru and in Celtic myth she was a golden-haired giantess. It was a very popular name in early Ireland.

Brid (Breed) – Brid is related, not surprisingly, to Brigid/Bridget, the most famous female saint of Ireland, the patron of agriculture, healing and poetry. Bridget is currently Number 536 on the national popularity list, and even higher on Nameberry.

Colm (Coll-um) – An Irish name that’s never emigrated here, perhaps because its pronunciation isn’t as accessible as the popular Colin and despite distinguished bearer Tóibin.

Eilis (AY-lish or EYE-lish) – Eilis Lacey is Saoirse Ronin‘s lovely character name in Brooklyn, which might help to make it more familiar in the US. A common Irish name in the Middle Ages, it is a relative of Elizabeth and Isabella and perhaps even Alice, and can also be spelled Eilish.  In the film, the name is pronounced AY-lish, though many Irish people would say EYE-lish.

Enda – Enda is the accepted Anglicization of Ennae/Eanna, a male name attached to a saint who was an early organizer of Irish monasticism. Its feminine sound would not stand it much of a chance for an American boy.

Eoghan (OH-an) – Owen is hot, and this is his Irish ancestor. Another male name with a rich mythological background, it’s currently Number 56 in the Emerald Isle , and can also be spelled Eoan, which makes it a bit more accessible.

Iarla (EER-lah)—Though we think this would sound pretty on a girl, it’s actually a rare male name in Ireland. A longer form is Iarlaith, the name of an early saint who founded two monastaries and was famed for his constant prayer–he performed 300 pious genuflections each day and another 300 every night.

Maeve—Maeve is the most familiar and accessible on the list, a short, sweet and strong ancient Irish queen’s name that is now ranking at Number 482 and 53 on Nameberry! It also makes a perfect middle name.

Mella—Mell, Mella and Mealla are all versions of the name of the sister of St. Kevin and the mother of seven saints. Could join theBella–Della–Stella family.

Niamh (Neev)—An ancient Irish name rich in legend, in particular associated with Niamh of the Golden Hair; it was originally a term for goddess. A Top 35 name in Ireland, it’s also popular in England and Scotland. Phonetic spelling Neve—as in actress Campbelland the daughter of Conan O’Brien—would make it more user friendly in the States. But the authentic spelling ranks Number 396 on Nameberry.

Róisin (ro-SHEEN)—one of the loveliest Irish girls’ names when properly pronounced, Róisin is mega popular in its native land right now, ranking at Number 34. Sinéad O’Connor used it for her daughter back in 1995.

Saoirse (SEER-sha or SUR-sha)–Saoirse is actually a modern girls’ name based on the word for ‘freedom’. It came into use in the 1920’s and gained impetus with the birth of the Irish Free State. It is currently Number 23 in Ireland, 249 on Nameberry. While most Irish people pronounce it SEER-sha, Ronan has been quoted as saying she pronounces it to rhyme with “inertia.”

Tadhg (TYEg)—A name with the evocative meaning of ‘poet’, Tadhg is popular in Ireland today. The appellation of the mythical Finn McCool’s grandfather and an eleventh century king, it was used by The Saturdays Irish singer Una Healy for her son, but an American boy with the name would have to keep explaining “it’s tiger without the ‘r’.”

The 2life Baby app is the best way for expecting couples to stay informed and organized up until the baby is born and beyond. Share, collaborate and coordinate with your partner, all in one colorful, easy-to-use app. Download now, it’s FREE!