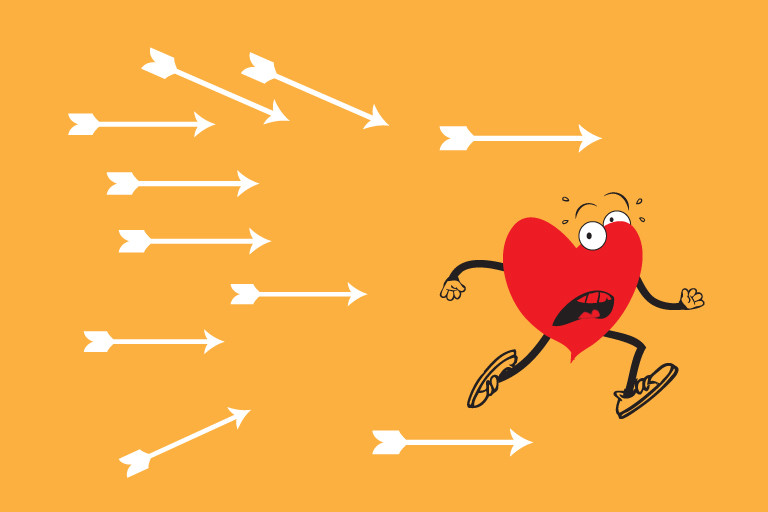 So You Think You Can Date

The day I turned 20 I started to panic. My dating history could be tallied up on fewer than three lines in an Excel spreadsheet. I was destined to die a virgin in some remote convent surrounded by 18 feral cats. I hate cats.

The truth of the matter was that even though I was desperate to be in a steady relationship, they scared the hell out of me. Having grown up with a ringside seat to the drama of my parents’ troubled relationship didn’t endear me to the idea of commitment.

My initial feelings towards my future husband could best be described as approach-avoidance (I was doing a graduate degree in Psychology at the time so the self-diagnosis wasn’t too difficult). Yes, he was fantastic – a scholar, accomplished athlete and true gentleman. But the minor scratches on his surface (such as his love for cats and hatred of dogs) made me suspect serious rust underneath his shiny exterior.

Us commitment-phobes (CPs) do not have to look very far to find excuses to run for the hills.

It isn’t easy dating a CP and many people don’t get out of the starting blocks. So if you are dating someone like me, you will want to hear my advice on how to increase your chances for success.

Stay overnight at their place unless explicitly asked. Better to have those early liaisons at your place where it is easier for a CP to control when the date is over. Us CPs get anxious when our physical space is invaded too early in the relationship. We feel like rats trapped in a maze and start to look for an exit strategy. If you do stay over, keep your personal items (such as toothbrush, clothes or books) out of plain view. Yes, you may get to the stage quickly where it makes sense to leave your toothbrush at their place but don’t make it seem like you are plotting to permanently move in. Never ask for an extra key.

Tell them you love them too soon – in fact, best to keep them guessing as to the seriousness of your intentions. Being slightly unattainable will make you that much more desirable. And as far as demonstrations of emotional intimacy go, start with a wink rather than a full onslaught. Being in a relationship with a CP means taking baby steps towards emotional intimacy. Remember, it does not take much for us CPs to start to suffocate when the transition from “me” to “we” happens too fast.

Refer to them as your boyfriend or girlfriend unless you have absolutely confirmed that this is the case. CPs hate labels. Labels itch, and we will scratch them off until our skin is raw. Do not change your status on Facebook from ‘single’ to ‘in a relationship’, or introduce them to your friends as your “significant other” without permission. Also, best not to ask them to do ‘boyfriend’ or ‘girlfriend’ things too early such as babysitting your cat (or your kid), lending you money, or taking your clothes to the dry cleaners. Don’t assume they are just dying to assume these “personal” chores – they’re not.

So you think you can date a commitment-phobe? If you have a strategic mindset, intuition, patience and perseverance you just might have what it takes. Is it worth it? After  25 years of a happy marriage, two great kids ­and yes, even two CATS, I like to think so.

Watch this hilarious improv skit on dating by Naomi Snieckus and Matt Baram!