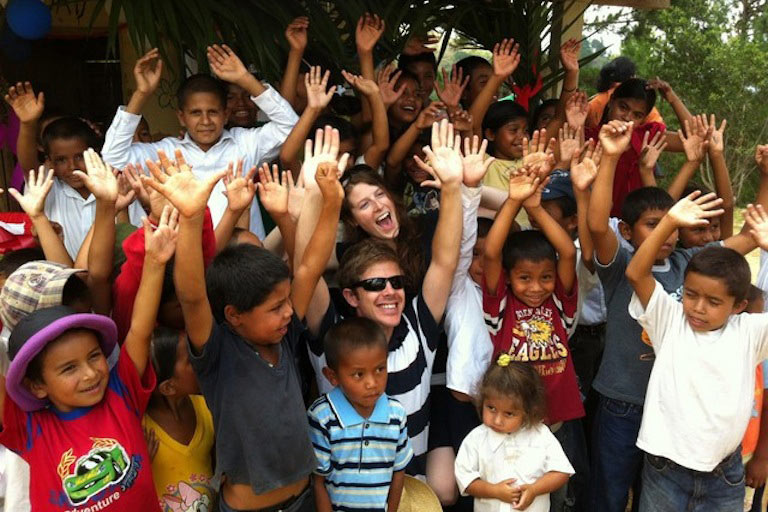 Tom Affleck, 35, and Sarah Kerr, 25, grew up in the Ottawa Valley and were both eager to leave a positive thumbprint on the world. They ended up on a remote Caribbean island together, building a school brick by brick and falling in love. Here, the married couple describe the work they do together for his SchoolBOX, a not-for-profit dedicated to expanding education access for Nicaraguan children, and how being united for a greater good makes for a happier relationship.

Tom says…
In 2006, I went to Nicaragua and I brought some pencils and notebooks. I gave them to two little girls, and one girl’s father beamed and said, “Now you can go to school.” It was a watershed moment. The next year, I was back in Canada and trying to raise money to build SchoolBOX’s first school. One donor suggested Sarah as a volunteer. I told her to raise $5,000, go to Costa Rica, learn how to speak Spanish and take the bus to Nicaragua. And she did. When I went to pick her up at the station in Managua, I was suddenly struck by how beautiful she is. I stifled it because we were working together but we still fell in love. We were on this tropical island, each staying with one of the teachers and surrounded by kids helping us pour cement for the school.

Working alongside Sarah, seeing her talents and the size of her heart, has been awesome. I might not have had a chance to see that if we both went off to separate nine-to-five jobs. Almost five years ago, we started trying to build a school in Managua, and we ran into every possible obstacle: budget, land, corruption. But we were able to hold on, and in December we opened the school with new classrooms and running water and a library. We persevered and took such a huge beating, but this crazy, consuming mission has been such a blessing for our marriage. We’ve really needed and supported each other every single day instead of pulling in separate directions.

Sarah says…
I had done some volunteering in South America, and was saving up to do more while working in a little bookshop. And then I ended up in Nicaragua with this handsome, charismatic guy. Initially, I was thinking, “You’re this guy’s intern, stop!” But we just wanted to be near each other; we wanted to sit next to each other at lunch every day. We were on this beautiful island, looking into each other’s eyes, thinking, “This is it.” We’ve been married for three years now and it’s been like a dream.

One of the things I love most about Tom is that he gives so selflessly to help others. On that first trip to Nicaragua, my mom sent down a suitcase full of T-shirts for the kids. Tom’s luggage didn’t arrive, so I watched him with no clothes, no stuff, nothing, giving all of his time and money to build this school while wearing the shirts my mother sent.

In our culture, we get so obsessed with picking each other apart—is he perfect, is he Mr. Right? Neither of us met each other’s checklists. But when you’re working on something like this, it helps you focus on the things that are really important. We actually became Christians together in Nicaragua—a sort of reverse missionary thing—and our shared faith and sense of something greater helps to keep things in perspective. Education is such a game changer for people living in poverty. Last year, we worked with 15,484 kids and teachers and we’re going to keep working to make education accessible. Building that first school together absolutely solidified that this was what we both want to do.

filed under: chairty, power of 2, profile, travel
< 2 People 1 Life Is It Wrong For A Woman To Dress Her Man? >