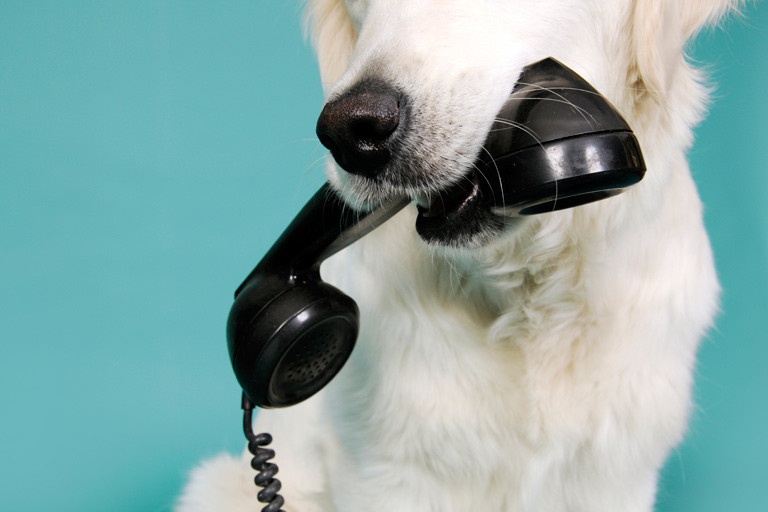 I Miss You Too. Now Put The Dog On

I bought my husband the funniest New Yorker cartoon birthday card. A middle-aged guy is sitting hunched over the edge of a bed in a hotel room speaking to his wife on the phone. It’s late at night, he is still in his shirt and tie, and his suit jacket is neatly folded beside him. The caption reads, “Yes, yes, yes, I miss you too, honey. Now put the dog on.” I was gobsmacked by how real this card was.

My husband, John, travels a lot. We too have a number of late night telephone conversations. We too have a dog. Jessie. John always asks in a homesick voice, “how’s Jessie?”

I totally understand why a husband would miss his dog more than his wife. Jessie is more unconditionally loving and far less bitchy than me (even though she is technically the only real bitch in our family).

I cannot compete with how Jessie greets John when he arrives home. She wags her tail so hard that stuff flies off the shelves. My enthusiasm is much more subdued. No vigorous tail wagging and I’m often too exhausted to haul myself off the couch. Chalk it up to single parenting for one day too many.

Jessie, unlike me, does not place undue demands on John. She may bark when she wants one last pee before bed, but beyond that she’s pretty content. Let’s just say that my list of demands would take up the entire space of this blog. I won’t bore you.

Jessie is also way more laid back. She is not the least bit fussed that John’s suitcase (a.k.a., the new dog-bed) lays unpacked three days after arriving home. She’s hoping he never unpacks. I hope he not only unpacks but puts his laundry in the hamper, takes it to the laundry room and does a load of darks. Never mind, let’s just start with unpacking.

Does my husband miss me when he’s away? Of course. But when I hear him ask, “how’s Jessie” as he is sitting alone and lonely in his hotel room hundreds of kilometers away, I know he can’t wait to walk in the door and get the big slurpy dog kiss he has been waiting for.

filed under: advice, marriage
< 9 Signs That You’re Head-Over-Heels In Love How To Have Hot Monogamy >