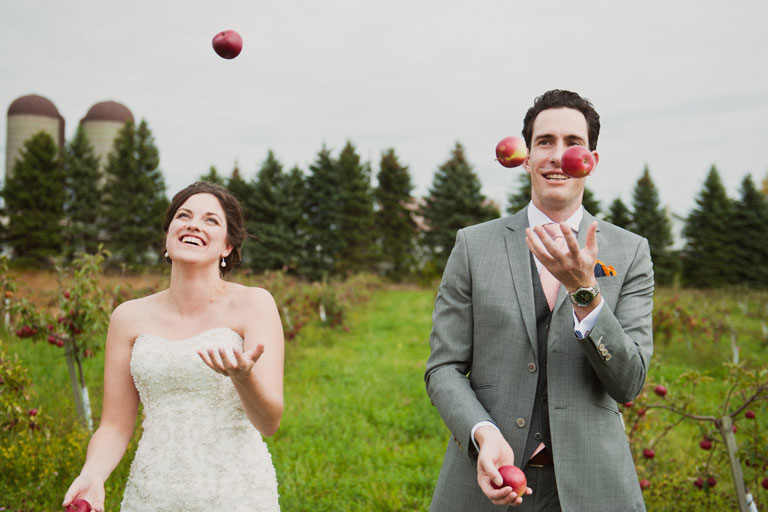 When a couple lives in Toronto, but the bride hails from Muskoka (two hours north of the city) and the groom from South Africa, where in the world should they celebrate their wedding? This is precisely the conundrum that confronted Jaimie and Ben as they set about planning their celebration.

“With Ben’s family being in South Africa, and mine here in Canada, we had the tough decision of whether to have the event in either country or as a destination,” Jaimie explains. Ultimately, the two decided to host their wedding in Canada, and they soon fell in love with a picture-perfect venue: the Fields on West Lake. You honestly couldn’t ask for a prettier spot for an elegant, rustic wedding. From pristine red and green buildings (that date back to the 1860s!) to sprawling apple orchards, this historic farm abounds with dreamy photo ops, as captured by their photographer, Scarlet O’Neill. Indeed, Jaimie and Ben took full advantage of the property: they said “I do” beside the venue’s pond, served cocktails by the sheep shed, and hosted their reception in the main barn. Conveniently, Jaimie and her bridesmaids were also able to get ready in one of the property’s carriage houses pre-ceremony and several family members stayed the night in buildings on-site. 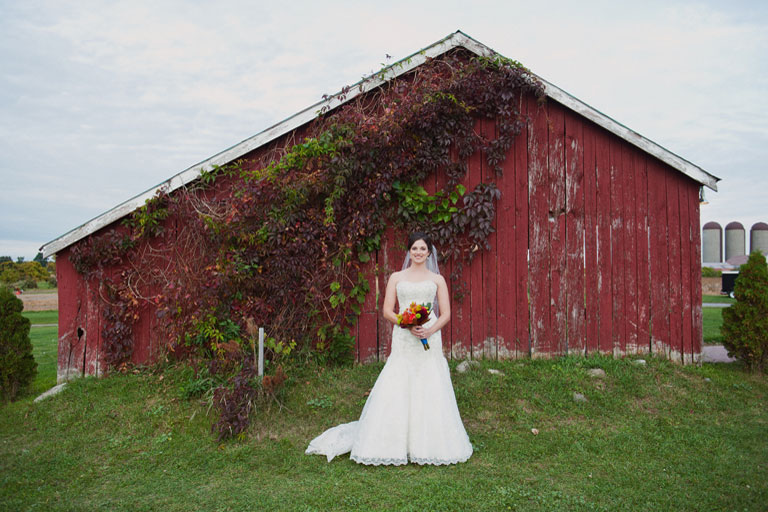 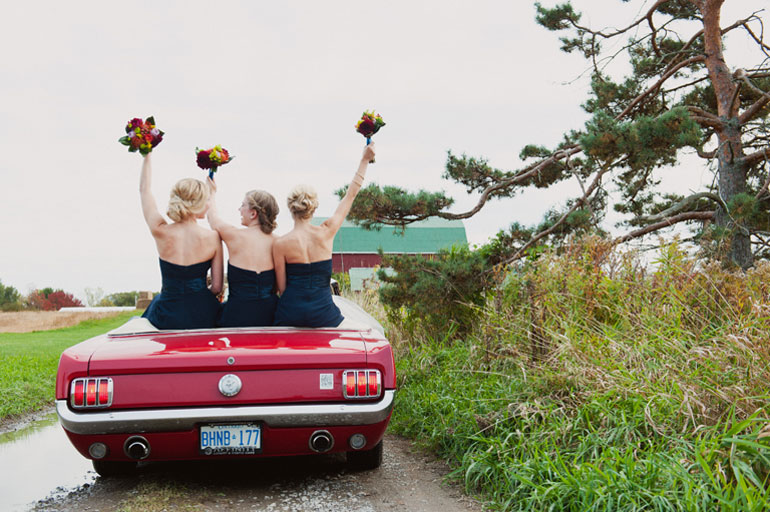 One wedding detail that was a particular hit with Ben: a shiny, candy apple red 1966 Ford Mustang convertible. “He insisted that it would look great in photos, but I know he just really wanted to drive it,” Jaimie laughs. All joking aside, the vintage car truly was a spectacular prop for the couple’s portraits (and their wedding party enjoyed the sweet ride, too!). Speaking of the wedding party, their fabulous attire bears noting. The bridesmaids dazzled in deep blue Bill Levkoff gowns, which were complemented by vibrant bouquets, while the dapper groomsmen made a stylish statement of their own in blue blazers paired with crisp white shirts and charcoal gray trousers (all from GotStyle). Not to be outdone, the handsome groom wore a custom-made three-piece suit by Made. Every single detail of the suit was tailored for Ben, including a secret personalized message: his and Jaimie’s initials were embroidered inside the jacket. Last but not least, Jaimie was truly the belle of the ball in a dreamy Private Label by G bridal gown with an exquisite beaded bodice. 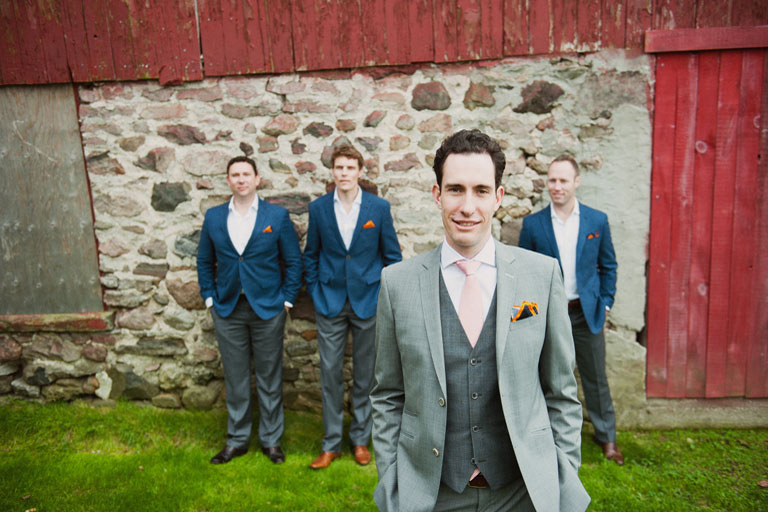 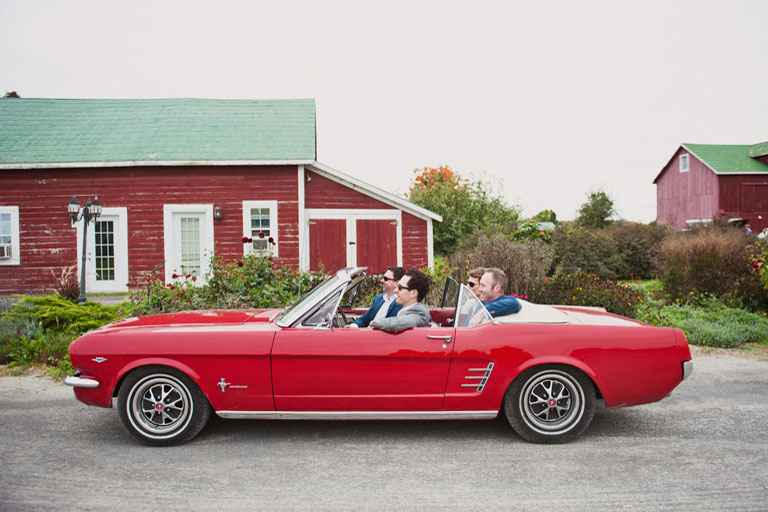 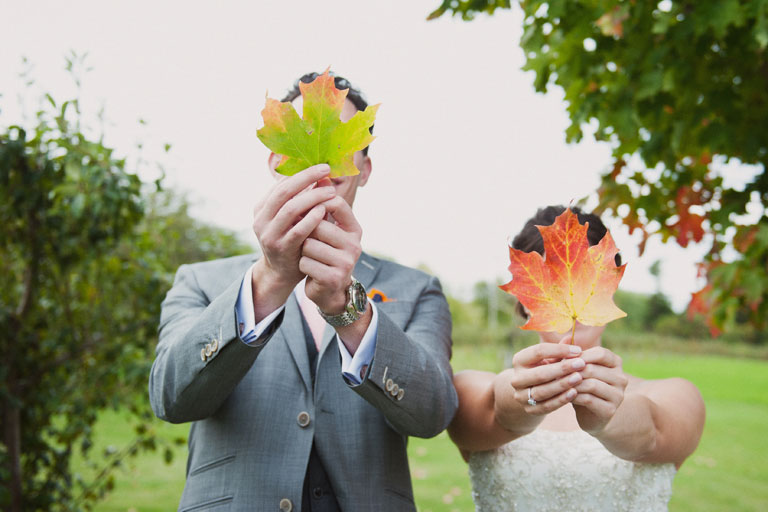 Another advantage to the Fields on West Lake was the built-in florist! Blooms on West Lake, which operates out of the barn, provided all the couple’s exquisite flower arrangements, including bright, cheerful bouquets and boutonnières. Furthermore, Blooms also decorated the aisle and the arbor for the duo’s ceremony. Flowers were just one way the couple paid homage to Ben’s South African heritage: the exotic-looking orange protea, the national flower of South Africa, was incorporated into bright, cheerful bouquets and boutonnieres. Ben’s parents also brought wedding favors straight from their homeland: hand-made glass figurines of South Africa’s “big five” animals (lion, leopard, rhino, elephant and buffalo). 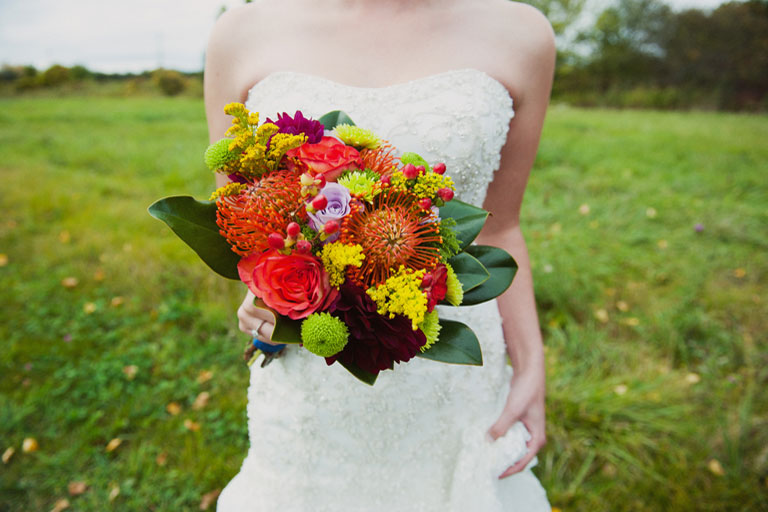 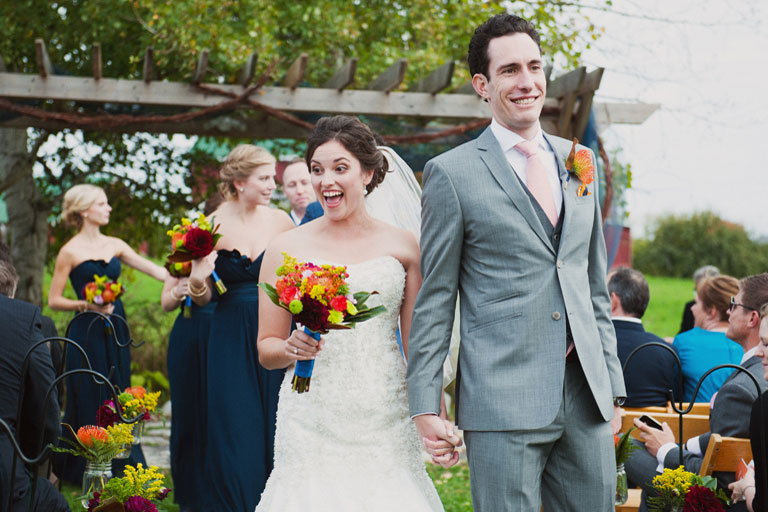 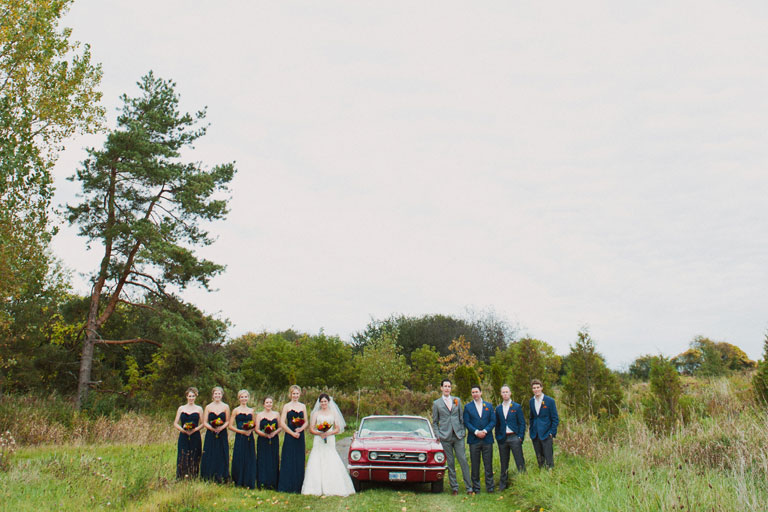 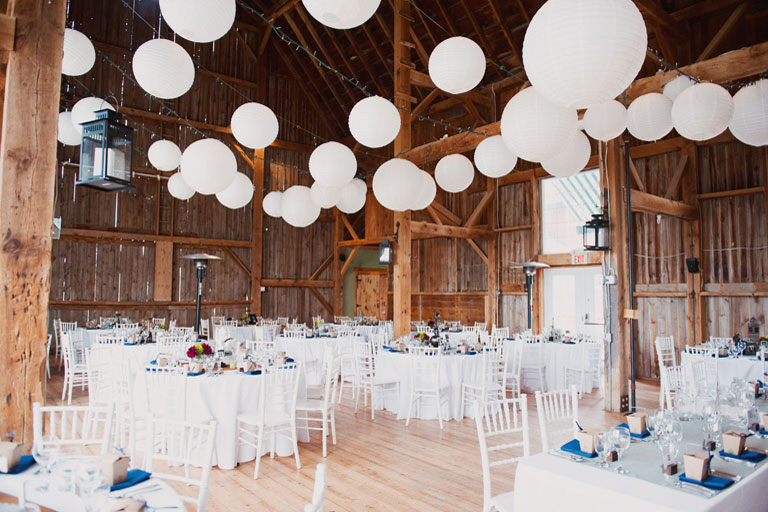 To honor their favorite pastime, Jaimie and Ben named each reception table after a place they’ve visited (like Istanbul and Boston). The centerpieces consisted of souvenirs from each destination as well as photos of them visiting there. To reinforce the travel theme, Jaimie (a graphic designer) designed “passports” with information about the day as well as funny facts about the duo’s relationship. Instead of escort cards, guests received “boarding passes” that indicated where they would be heading for dinner! 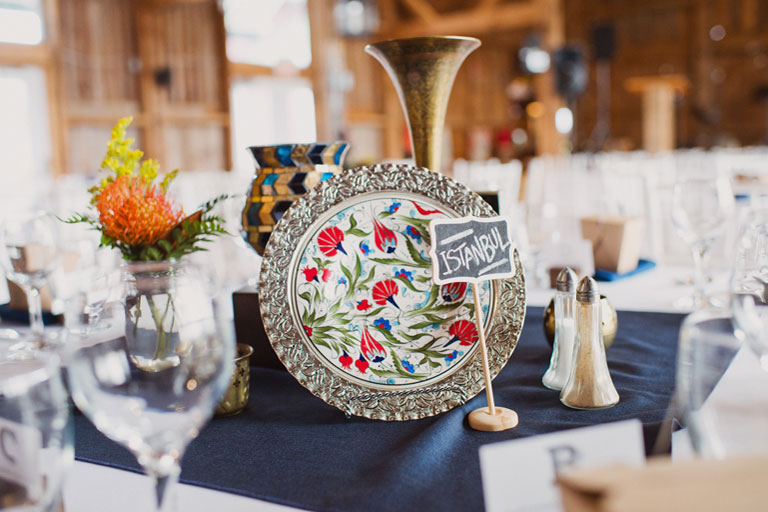 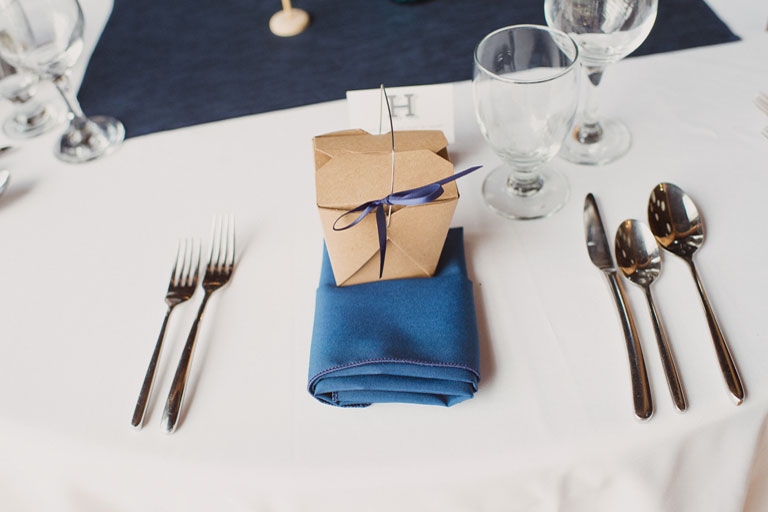 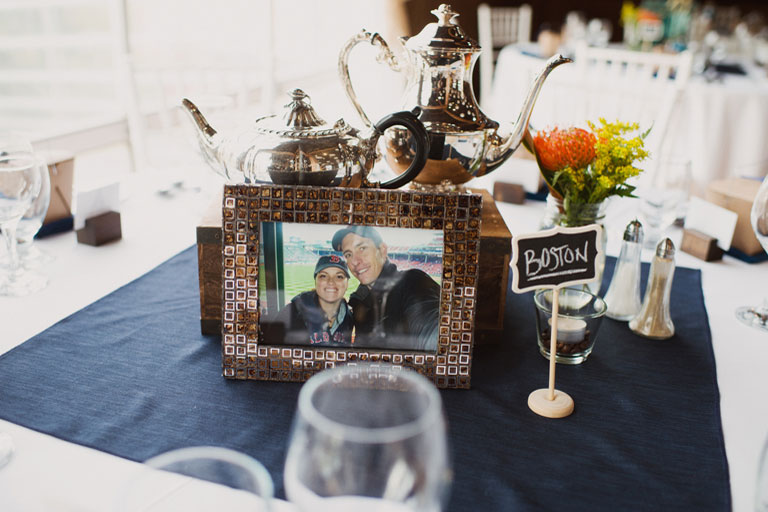 When asked to describe their favorite moment of the day, Jaimie and Ben both agreed it was during cocktail hour when they slipped away to take some shots with their photographer, Scarlet O’Neill. “We could see everyone mingling; we could hear the odd burst of laughter, and the music from the three-piece band playing, and it felt like we were watching a movie,” Jaimie fondly recalls. “We just said to ourselves that we couldn’t believe it was real life because it was all so perfect.”