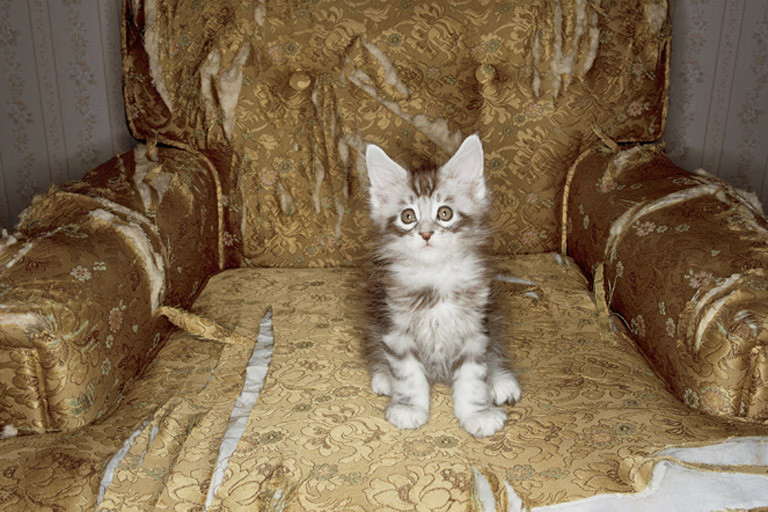 When your lover has a pet, it sure can peeve.

Here’s one you don’t hear every day: A Vancouver man terminated his engagement a few years ago after finding his pet tarantula hacked to pieces by his arachnophobic fiancée. The woman left the spider’s bits–presumably about nine of them–strewn across the terrarium serial-killer style before fleeing the crime scene.

Sure, Itsy Bitsy’s demise was tragic, but few will mourn the death of a mammoth, hairy arachnid. Dealing with a cute, loyal, cuddly pet-confidante, however, can get a bit trickier in a relationship.

Let’s face it, we live in a world where pets are the new children (or “furkids”), with their own Burberry rain gear and lines of bone-shaped furniture. (One lucky cat in Britain was even left a house in its owner’s will.) Animals have long since graduated from being cow-chasing, mice-hunting barnyard creatures and are now major familiar players that fill many the childless and loveless void.

And the hairball starts to roll when pet owners and those who do not own animals run unleashed on the same dating field. A pair meet, begin to date, and all seems peachy thanks to typical shows of good behaviour at the beginning of the relationship. Not until weeks into the courtship–often after a pair of Louis Vuitton pumps and/or the remote control has been destroyed–does the issue suddenly arise: “Uh, honey, sorry but I think I’m allergic to Cuddles.”

In John’s case, the 28-year-old fund administrator didn’t know that his fiancée’s 15-year-old sourpuss would hiss and swat at him every time nature called his number (the cat’s litter box just happened to be located right beside the toilet) until he moved from Ireland to her tiny apartment in Vancouver.

For Scott, a 32-year-old political assistant, it was a cat named Sunny that cast an insurmountable cloud of doom over his relationship the moment he moved in with his girlfriend. “The cat would lie on the pillows between the two of us, meowing and pawing my face,” he says, adding, “Denying me a full night’s sleep for years was something I could not even pretend to accept.”

His girlfriend wouldn’t kick the cat off the bed. He wasn’t heathen enough to take even one of its nine lives. The couple didn’t end up lasting.

But was it really all the cat’s fault? “It’s not so much fighting over the pet. It’s more fighting for each other,” says Jack Cehak, a Vancouver-based couples counsellor. Eva Philipp, a Toronto-based psychotherapist, concurs. “Pets can be like children to people, and they love them and show that love. But pet makes three, and people get jealous.”

A bit of jealousy seemed reasonable in 23-year-old Brandi’s case. She had to share her boyfriend Andrew’s time and attention with his 17-year-old dog. She also had to share the same name as the dog (spelled Brandy). The resulting confusion was humorous at first (“Great party. Sorry we have to split, but Brandy didn’t go No. 2 before we left the house today”), but quickly wore thin.

And you’d understand if Sarah, a 33-year-old magazine editor, had been jealous. She had to train her boyfriend out of calling both her and his female dog “Baby.” And when they first began to date, he’d make her an amazing breakfast of sheep’s milk yogurt, lavender honey and organic peaches, then serve his dog the same thing. But Sarah wasn’t jealous of the dog; the dog was jealous of Sarah. The proof? It snacked constantly on her clothes. Bitch.

“If there’s competition between the pet and a human, it’s the relationship [between a couple] that loses,” says André Stein, a Toronto psychotherapist. “One of the foundations of a relationship is that it must be 100 percent free of competition.”

Make no mistake about it: The competition can get fierce. Kerri, a 29-year-old teacher, loathed animals. But boy­friend Daryll came complete with a ﬂuffy, white indoor feline. Kerri tried to em­brace the cat, but it incessantly pestered her, clawing at her belongings and coating her wardrobe in enough white hair to seriously upset PETA.

So when Daryll worked night shifts, she liberated the animal, putting it outdoors until it spent more nights outside than in. Finally, it just disappeared. (The cat did wander back one day, but it was obvious it had found a new owner; it was fat and was sporting a new collar.) “I had to win–it was me or the cat,” recalls Kerri, whose relationship with Daryll ended several years ago anyway. “I should have known it wouldn’t have worked out with a guy who had a pet.”

Indeed, pets are often harbingers of relationships. Robert Colby, a psychologist based in Vancouver, believes if you want to clearly see the health of a relationship, look to the pet for clues. “In most cases, a pet is a way to test boundaries and acceptance in your partner’s life,” he says.

It was a feline friend that nipped a relationship in the bud for Lisa, then a teacher in her 30s. Her new boyfriend thought all cats were sinister. He loudly vocalized that Lisa should leave the animal in her past, but it had been pivotal in getting her through some difficult times. “I said no, and [the relationship] was over as fast as it began,” she recalls.

In Mel’s case, the 30-year-old advertising copywriter was into her new man, but he and her mutt just couldn’t work it out. “One day at the beach, my dog dragged me on to the bike path in front of two 18-year-old hotties wearing micro-shorts and boob-tube tops, and I consequently wiped out. [Embarrassed,] he yelled at my dog, and I felt like the parent of a poorly behaved Ritalin child,” she remembers.

The kicker came when, after reluctantly leaving her pooch alone at home for many nights because she was told that dogs weren’t allowed in her boyfriend’s apartment building, she heard barking in another apartment unit. He told her it was a “grandfathered dog.” Mel told him to beat it.

“There’s an old expression, ‘Love me, love my dog,’ and I finally realized that if you can’t handle my dog, you’re not right for me,” says Mel.

Yet testing the boundaries can also bring two people closer. For most couples, a pet needn’t be anymore an issue in a relationship than dishes or dust bunnies. Which is precisely why John married his fiancée despite her aggressive kitty.

“I understand that my wife has a deep attachment to that ill-tempered animal, but the simple fact is I care much more about her than I ever could about it,” John says. “I don’t have to love the thing, just live with it. We’re reasonable people and we’re trying different solutions. We’ll get by.”

And they have. As have Sarah and her dog-doting boyfriend, who got married last year. But the tarantula couple never reconciled–which is probably just as well. He’s undoubtedly gone on to meet a lovely snake charmer and made a much better match.