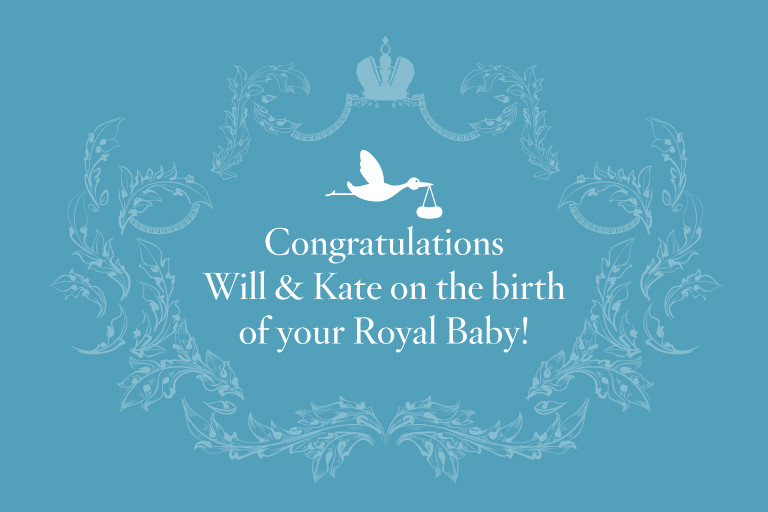 Congratulations to the Duke and Duchess of Cambridge!!!

On Monday, July 22nd, Kate delivered a baby boy weighing 8 lbs, 6 oz. (3.8 kg), and the couple has announced he is named George Alexander Louis. His formal Royal Title is His Royal Highness Prince George of Cambridge. George was delivered in the private Lindo Wing at St. Mary’s Hospital in Paddington, London.

“We could not be happier,” Prince William said in a brief statement on Monday evening. Will spent the long hours of labour by Kate’s side.

The world now awaits their first glimpse of the Royal Baby as Kate and baby prepare to go home. By all accounts, Will, Kate and the baby are doing great.

Prince George is the first grandchild of Charles, Prince of Wales, the third great-grandchild of Queen Elizabeth II, and is third in the line of succession to the thrones of 16 countries in the Commonwealth of Nations.

Now the world’s most famous baby, George Alexander Louis joins Will and Kate’s growing family which began in late 2011 with Lupo, their cocker spaniel.

At this special moment, we cannot forget Will’s late mother Princess Diana — she would have celebrated her 52nd birthday earlier this month, on July 1st — who would have been such a doting grandmother.

As for Prince Charles, he said he was “enormously proud” to become a grandfather.

Huge crowds were expected to gather at the Palace in London’s Green Park for a 41-gun salute to mark the birth of the Royal Baby, and celebrations and tea parties began in countries around the world!

Will and Kate are slated to move into their Kensington Palace apartment with George in the fall, following its renovation for the family home. It is expected they will be very hands-on parents.

We wish Will and Kate all the best as they embark on their latest life stage together, the biggest day in their lives since their Royal Wedding in 2011.

filed under: will & kate
< The 25 Best Romantic Moments Of All Time 15 Cheesiest Love Songs Of All-Time >