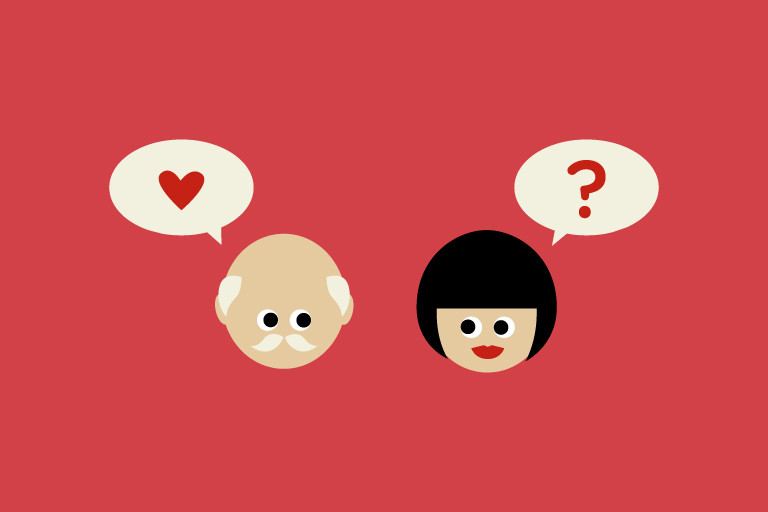 Becoming an old has thrown me a bit of a curve ball in the online dating scene. Since I turned 30, I’ve had an influx of messages from much older men. Before, I would get the occasional 45 year old, but now it’s multiple messages on a daily basis from men who are more than 10 (or 20) years older than me. At first, I thought the content of my profile skewed old, something I was putting out there was attracting them like flies to honey. Then I started paying more attention to people’s criteria in what they’re looking for. A lot of guys–older than me, might I add–are looking for women aged twenty-something to 29. I have been kicked into a new, undateable category. Apparently I’m too old for the 35-year-old but just right for the guy who’s 47. What?! If I’m single when I’m 40, will I be dating men in retirement homes? Listen, I am perfectly aware of societal views on gender and age. However, I would still like to call B.S.

These older guys are also much more persistent. I try to be polite and send a “Thanks but I’m looking for someone closer to my age” message, and that seems to encourage them more. One such gentleman said, “It’s not like I’m 20 years older than you,” to which I replied, “No, you’re 17 years older than me.” He went on to say he was only just past six years older than my age limit (I say I’m open to guys between 25 and 40), which is some really odd math. The next time someone asks how old I am, I’ll say I’m just barely more than nine years older than 19, which makes total sense.

Older guys aren’t the only ones who are persistent, and I guess I still have problems being rude. A friend told me to just ignore them, but I’ve tried that and I get the same number of crazy responses either way (sometimes crazier when ignoring). For example, I got an inbox message from a guy who wanted to talk, and I wasn’t into him, so I didn’t respond. A few days later, he caught me online and sent me an instant message about the Toronto mayoral brouhaha (under the “You should message me if…” part of the profile, I wrote, “You didn’t vote for Rob Ford. Or you did and would like to apologize.”), and again, I didn’t want to be rude. So I responded, there was a bit of small talk, and then he said we should meet up some time. Blerg. I said I didn’t think we were a good match, and he asked why (why must they always ask why?). I didn’t want to say I wasn’t attracted to him, that just seems overly harsh. I said there wasn’t a connection, he argued the point, but eventually conceded.

So I’ll leave this to you, Dear Reader: what’s the solution here? Ignore, reply and be polite, be brutally honest when someone asks why there’s not a connection? What would you do in my situation?