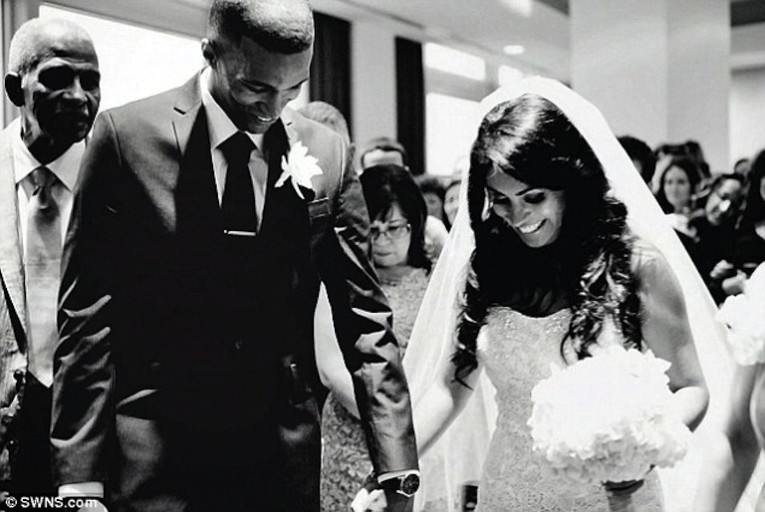 Lots of women use Pinterest to plan their fantasy wedding before they’re even engaged. Such was the case with Amanda Roman, who used her “My Dream Wedding” board to plan every last detail of her big day, from her gown to the bridesmaids bouquets.

Her boyfriend of five years, Ryan Leak, once heard Amanda tell friends that she wanted to get engaged and married on the same day.

Ryan chose the location — Miami, Florida — and recruited some friends to help him plan a surprise dream wedding for Amanda. (Are you getting goosebumps yet?)

Ryan’s planning went off without a hitch, but they experienced some bumps closer to the big day: the bride-to-be’s flight from Dallas to Miami was cancelled 24 hours before the wedding, and the couple had to change venues due a tropical storm and flooding on the afternoon of their ceremony.

But that didn’t put a damper on the couple’s spirits. “The day was even better than how I would have planned it,” says Amanda. “Realistically I never thought that I would be able to pull off some of the things I saw on Pinterest, but Ryan is a risk taker and he didn’t settle for my watered down version of my ‘dream wedding’ – he went for the gusto.”

Check out the video below to see how Ryan made his girl over-the-moon happy by surprising her with a wedding her Pinterest dreams were made of. The video’s a bit long, but it’s worth a watch to hear this couple’s sweet story and to see their romantic proposal and wedding.