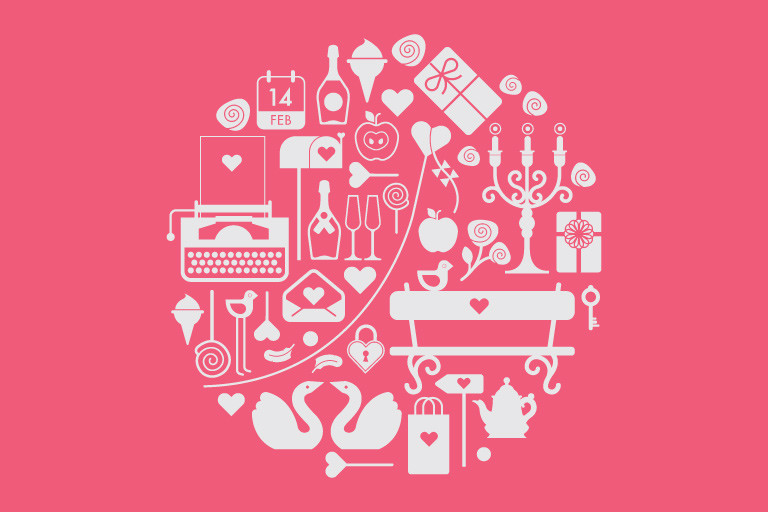 Dating Diaries: Why I Don’t Get Valentine’s Day (And Never Have)

Valentine’s Day is one of those things you either really love or really don’t. I’m sure you can guess which category I fall under.

The first Valentine’s Day that didn’t involve painstakingly writing cards for all the kids in my class (even the ones I hated), the first one where I had a “real” boyfriend, and the first one I actually gave a crap about, was in Grade 8. I had this boyfriend that I maybe kissed once or twice (it was awful) and went on a couple of movie dates with. He got me a giant Hershey’s Kiss. It was almost the size of my head. I was super excited because I love chocolate, and my boyfriend had given it to me. However, how are you supposed to eat a solid, massive Hershey’s Kiss? The best I could do was scrape my teeth down the awkwardly shaped blob, resulting in ribbons rather than bites. It took me months to eat that thing.

I got the usual flowers and cards from my high school boyfriend a few times (which I appreciated dutifully), but our really awkward Valentine’s happened while we were broken up. I was dating a new guy, whom I met through a friend at work (she was dating his best friend). She and I were both working on V-Day, and my boyfriend drove from out of town to deliver valentines to both of us from both of them. That same shift, my ex came in to give me Cadbury Creme Eggs (best holiday candy ever), but I took the mature route and hid in the back room rather than deal with him at that moment. He later left flowers in my car. We did eventually get back together, but surprisingly we never discussed Valentine’s again.

As an “adult,” I just don’t really get the whole thing with Valentine’s Day. I love giving (and receiving, let’s be honest) gifts. I put a lot of thought and effort into gifts; it’s fun, it’s how I express my feelings without saying things because saying things can be scary. V-Day, however, just doesn’t do it for me. It’s just so prescribed: Dudes, buy your ladies some jewellery or flowers or she’ll be mad. You’ll probably forget, because you’re just stupid dudes, and then she’ll nag you because she’s a woman, LULZ, but you’ll surprise her with a tennis bracelet you got at a mall kiosk and all will be forgiven. How romantic.

Seriously, if this is anyone’s idea of romance, I don’t want to live on this planet anymore. I’ve been the recipient of what I consider to be some awesome romantic gestures, and none of them happened on Valentine’s Day. They were romantic because they were personal. Two great examples: my boyfriend at the time knew I was obsessed with a band, so he left his school, bought the CD as soon as it was released, wrapped it and left it at the office at my school. That’s how you impress an 18-year-old girl. Another guy brought me a mini dictionary as a gift on a first date. He had clearly done his homework, and that left a better impression than any bouquet ever could.

I realize that I may be an outlier in the romance department as a woman, since the best birthday present I’ve ever received was a trip to see the Philadelphia Flyers for my first live NHL game, but I still don’t think Valentine’s Day is up to snuff. The only upside in my mind? Half-priced chocolate on February 15th.