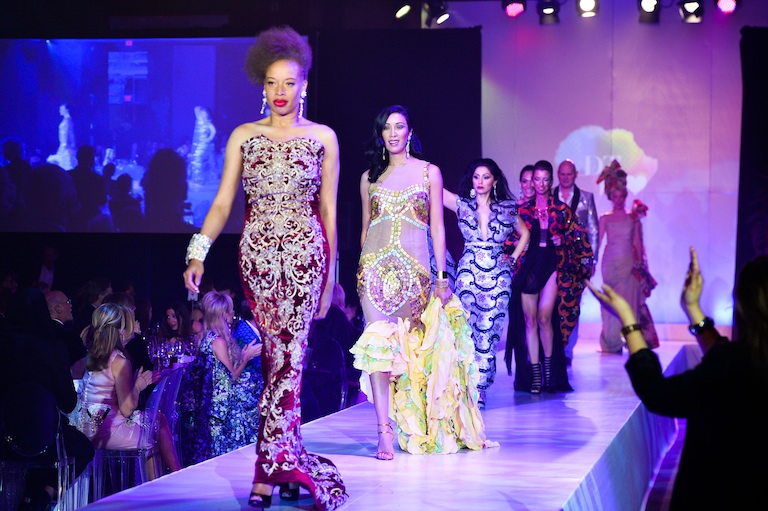 Friday, March 28 marked the 5th annual Dare To Wear Love gala, a charity fashion show in Toronto, Canada that supports The Stephen Lewis Foundation and its effort to help turn the tide of HIV/AIDS in Africa. 2life is proud to be an official partner of Dare To Wear Love along with several other sponsors including presenting sponsor, BMO Financial Group.

Top Canadian fashion designers donated their time and talent to this worthy cause, which has raised a staggering $275,000 to date. Each designer received six yards of African fabric to incorporate into an original creation. Canadian television and radio personalities, supermodels and other celebrities brought the creations to life on the runway at the DTWL Superheroes Gala. A highlight of the night included seeing the winners of the Dare To Wear Love Challenge, whose impressive individual fundraising efforts earned them a spot on the catwalk.

Along with taking in a fabulous runway show, the audience enjoyed performances from some of Canada’s brightest stars. Juno Award-winning singer and songwriter Divine Brown opened the show on a high note with her rockin’ number, while Dora Award-winning actor, playwright and dub poet D’Bi Young’s powerful and hopeful performance called on the audience to “love courageously.” A superhero-inspired dance routine was choreographed by Scott Fordham, and the show concluded with an uplifting performance of Rise Up by Juno Award-winning singer and songwriter Lorraine Segato in collaboration with vocal group Retrocity.

Another highlight? Twitter Canada’s Kirstine Stewart snapped a selfie of herself and Zaib Shaikh when they reached the end of the runway. Naturally, she shared the photo on Twitter. Models and guests alike shared photos from the gala and spread the word on social media in keeping with the evening’s purpose—using the power of fashion for good.

Check out some shots from the 2014 Dare To Wear Love runway! 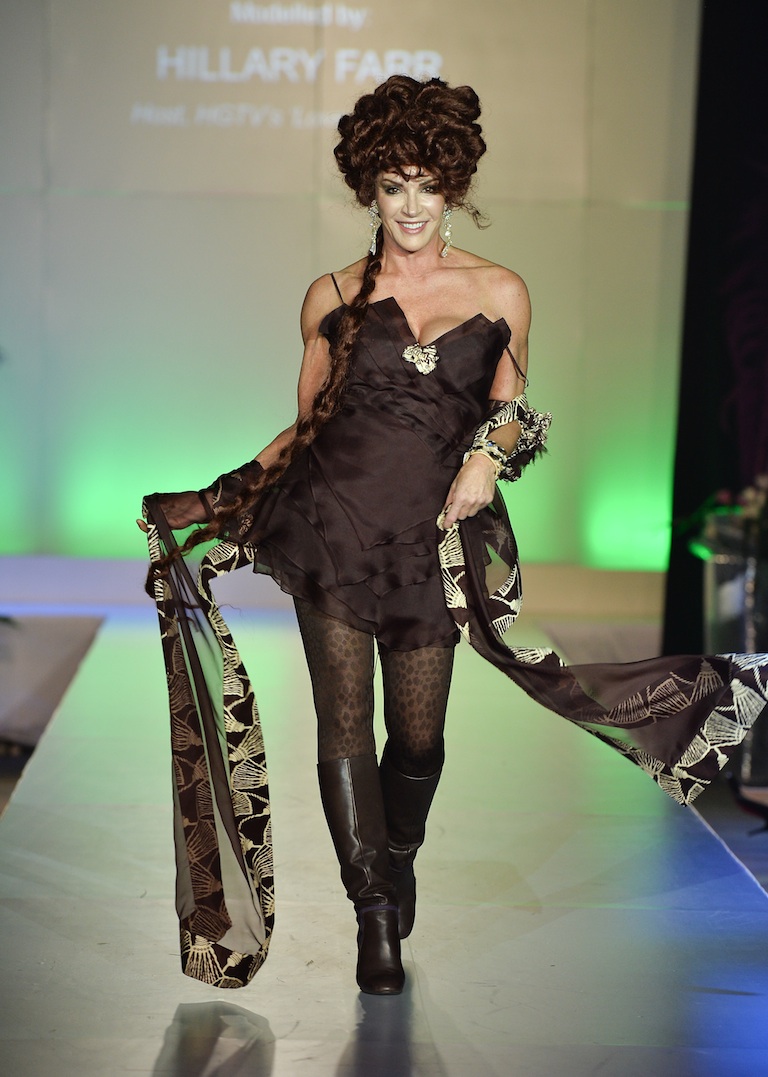 HGTV’s Love It or List It host Hilary Farr struts her stuff in a design by Reva Mivasagar. 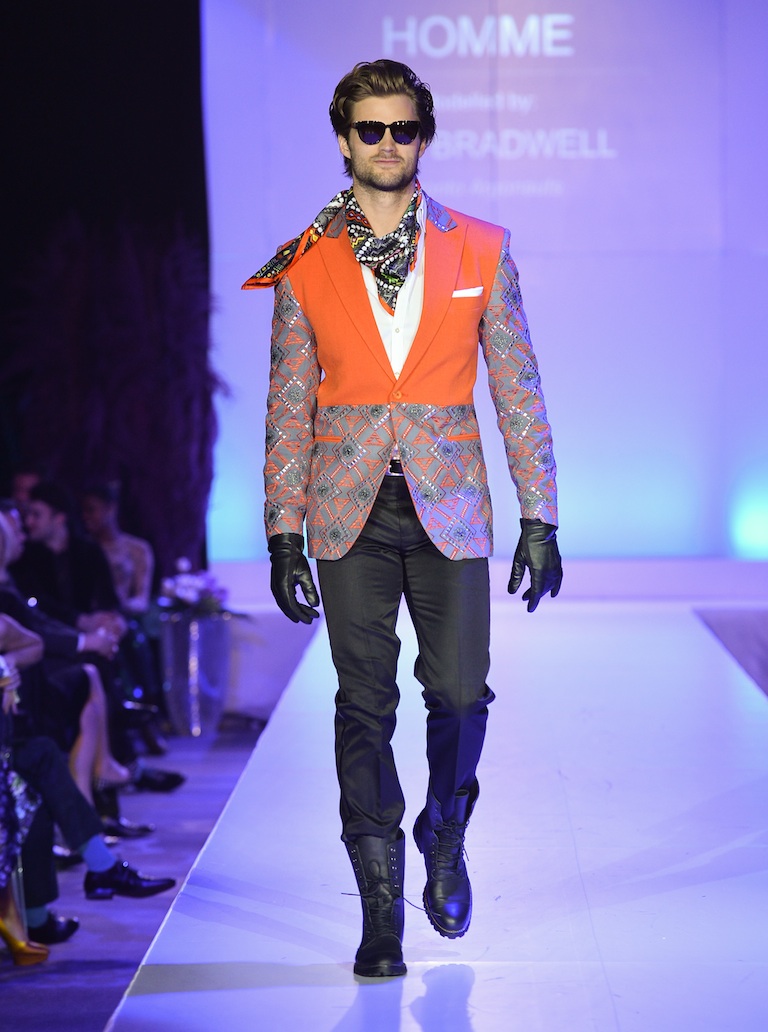 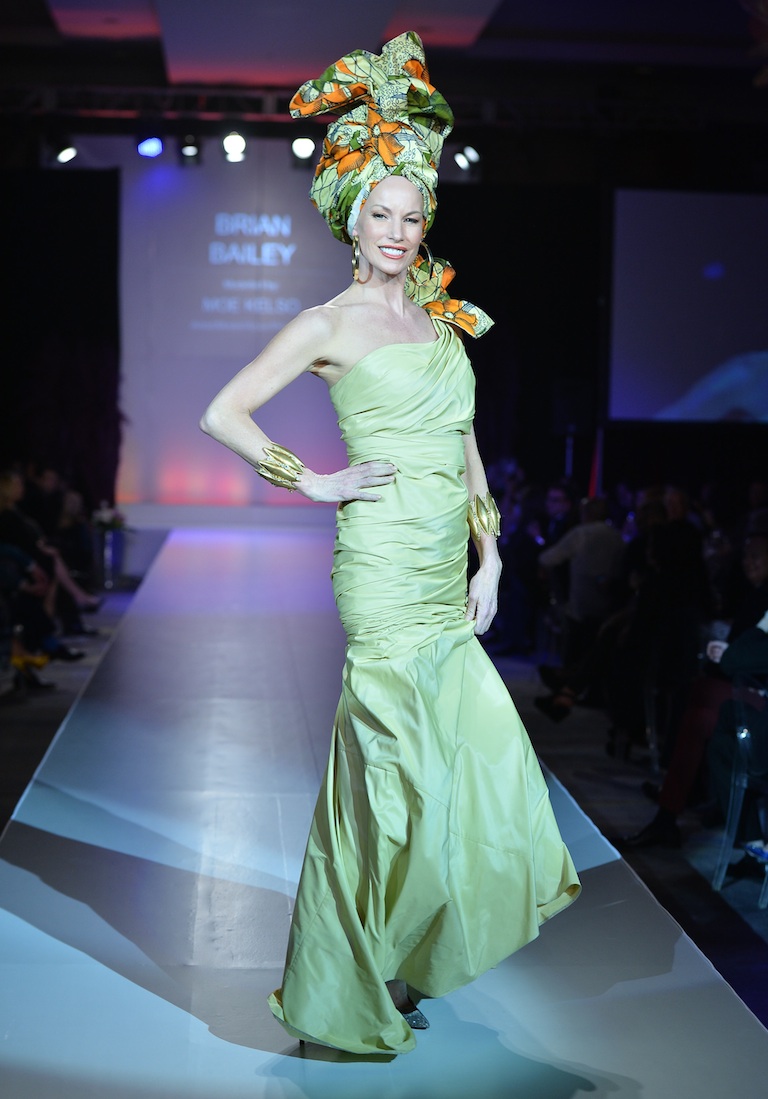 Celebrity artist/model/actor/producer Moe Kelso was a pro on the runway in a vibrant design by Brian Bailey. 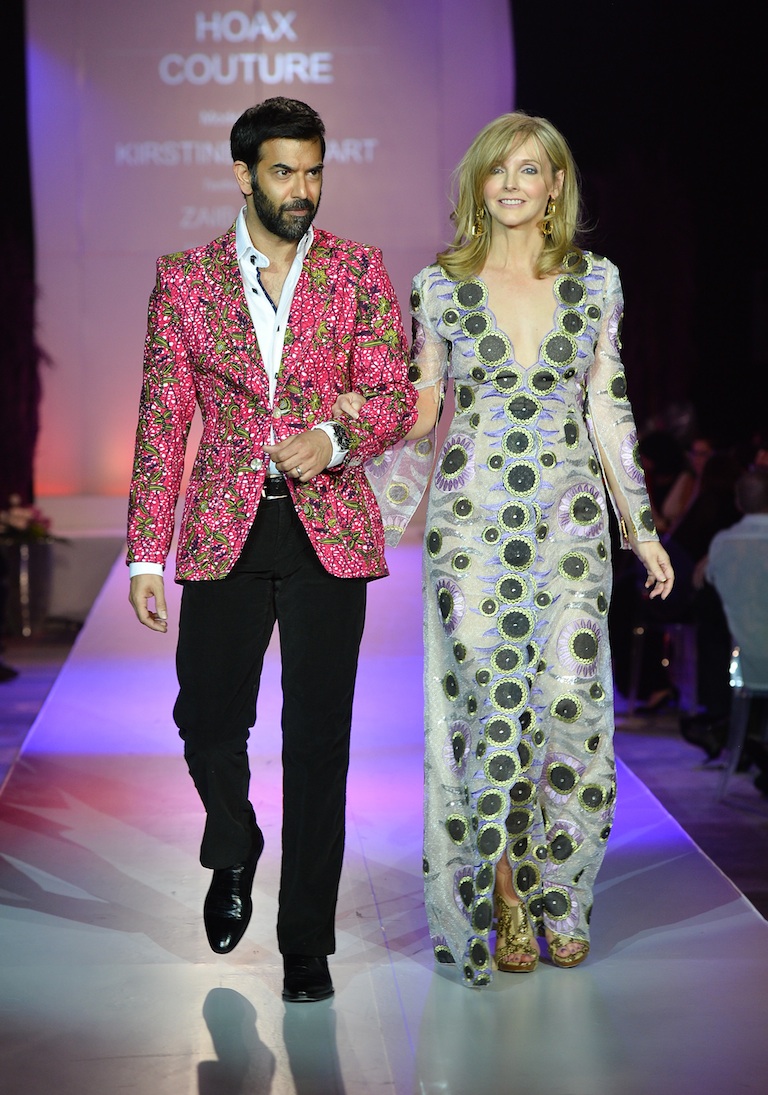 Actor Zaib Shaikh escorts Kirstine Stewart, head of Twitter Canada, down the runway. Both are wearing designs by Hoax Couture. 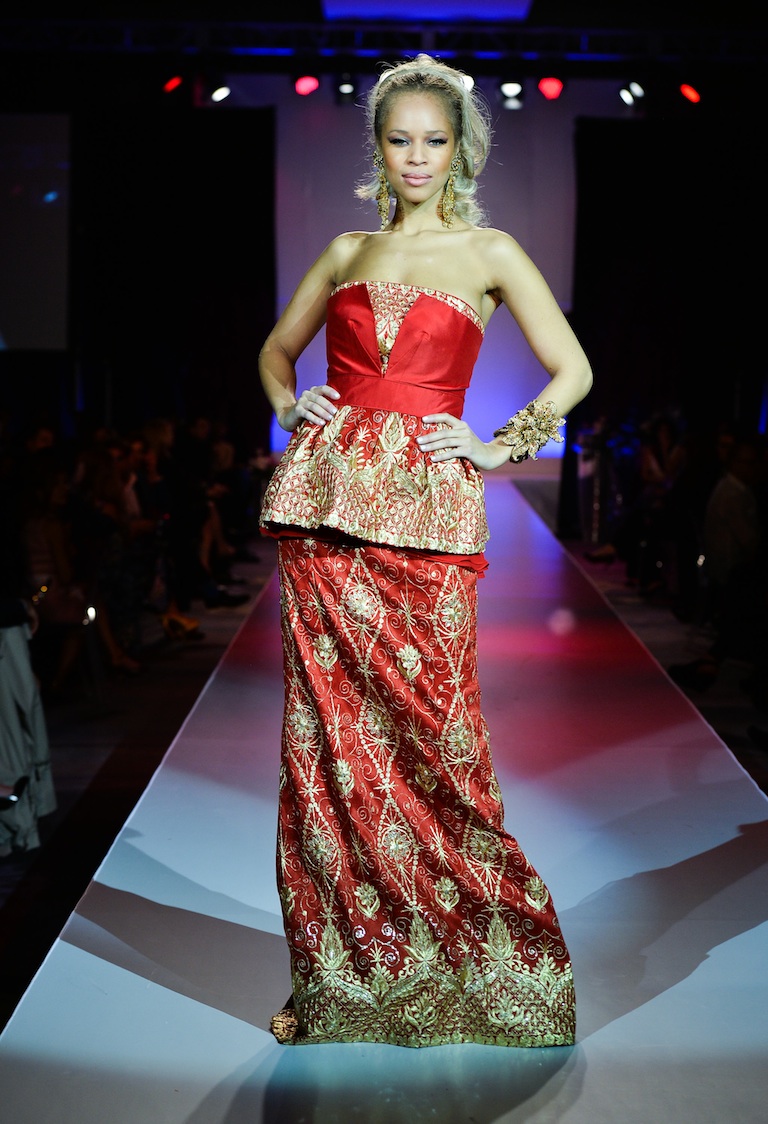 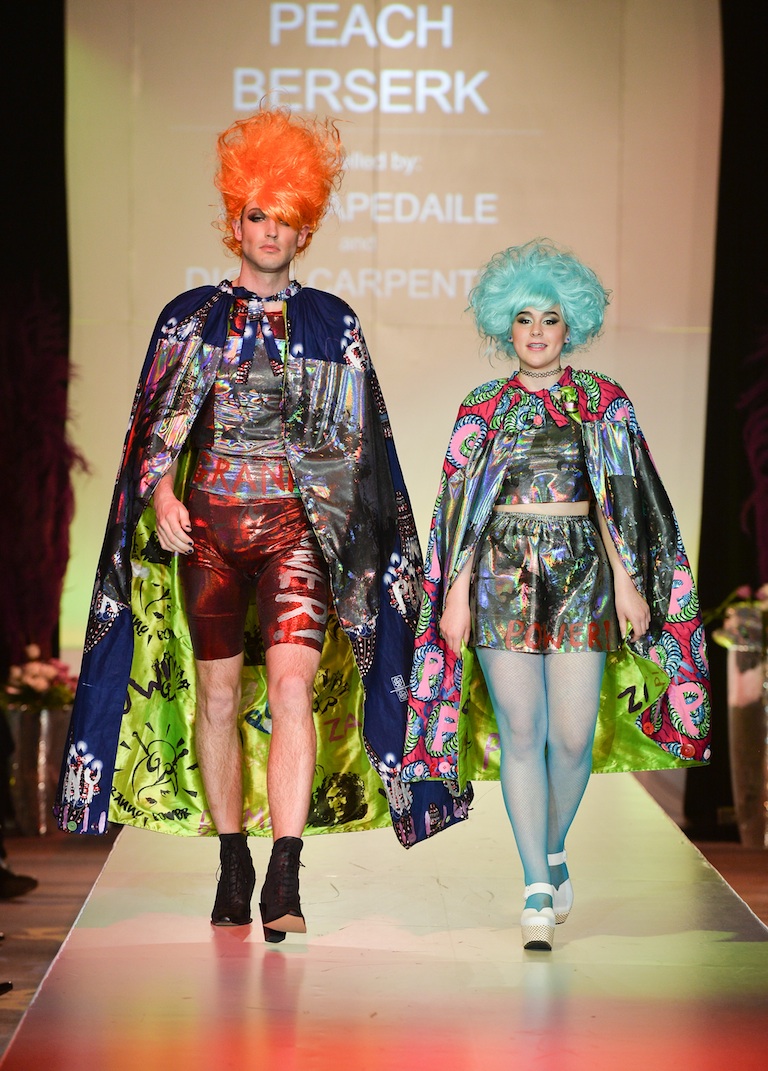 Peach Berserk designer Kingi Carpenter outfitted models Matt Apedaile (her nephew) and Digby Carpenter (her daughter) in superfabulous silkscreen “Granny Power” get-ups, capes and all! Granny Power is a nod to the African grandmothers who raise their grandchildren who are orphaned by AIDS. 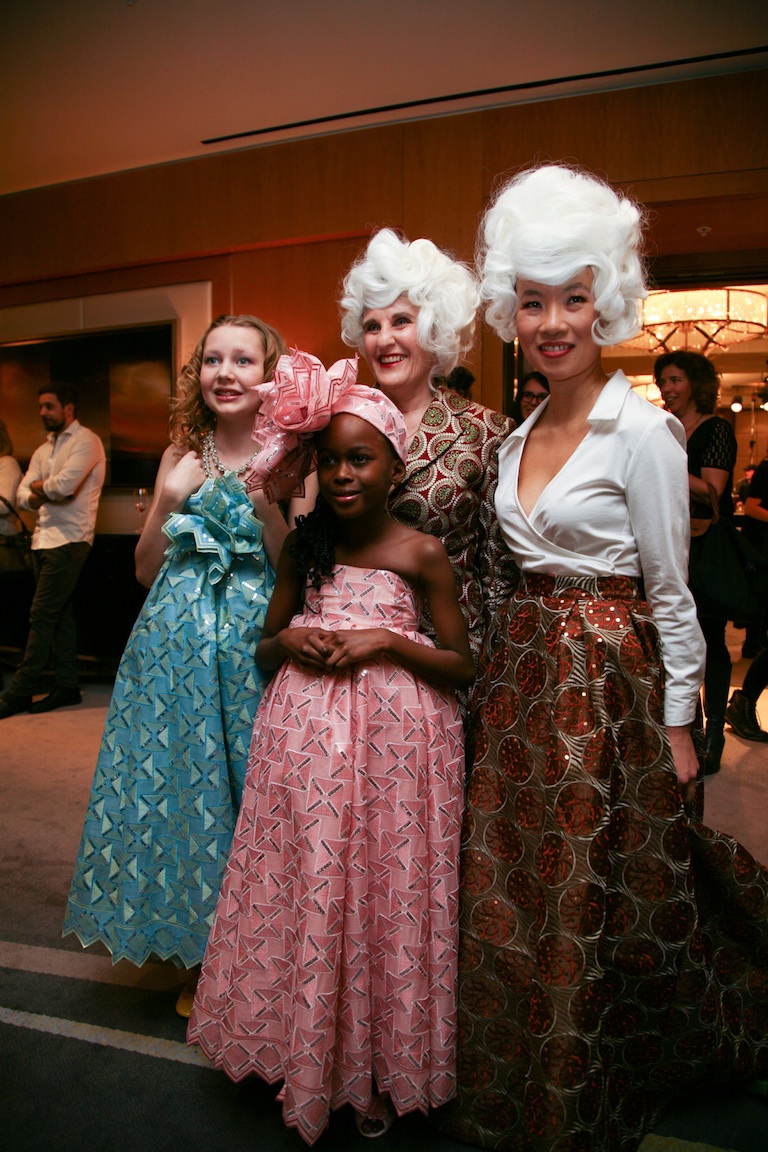 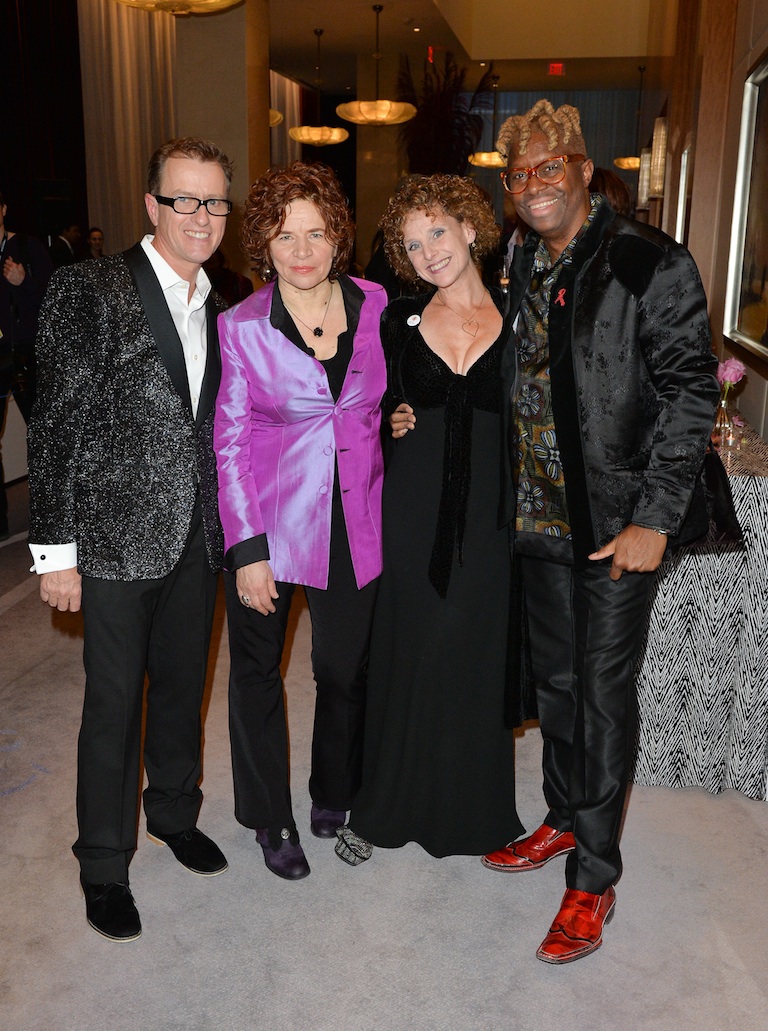 The event was a dazzling display of Canadian design talent, and an incredible example of how much can be accomplished when people come together for a fabulous cause. There was no way way that Hoax Couture founders Jim Searle and Chris Tyrell could’ve known that what began as a dinner conversation with Ilana Landsberg-Lewis, the executive director of The Stephen Lewis Foundation, would evolve into the spectacular and important event that Dare To Wear Love has become. They had been looking for a unique and meaningful way to make a difference in Africa, and, with the help and support of the foundation, corporate sponsors, designers, volunteers, and individuals, they’ve turned their dream into one superfabulous reality.

See our interview with Jim Searle and Chris Tyrell in 2life magazine.