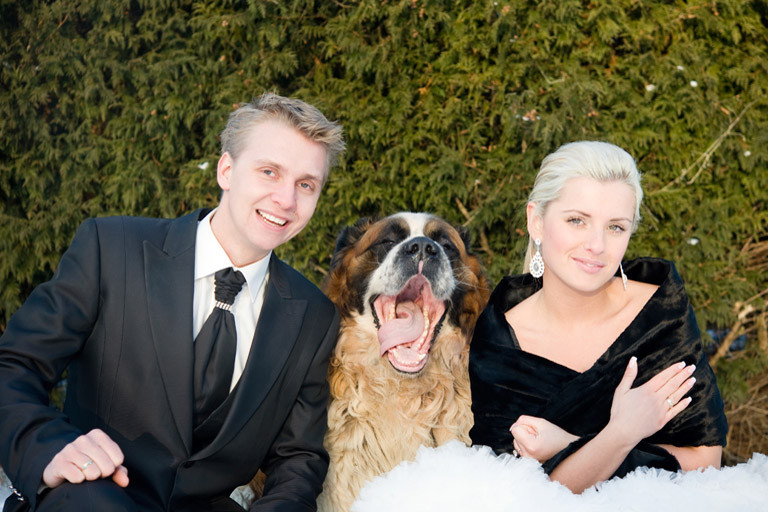 8 Things You’ll Do Because of the Dog

If you’re at all like us, you spent many years in the really-wanting-a-dog-but-not-settled-enough category, and as soon as you had a car and a mortgage and dog-tolerant accommodations, the dog was right at the top of the list. And if you are exactly like us, you adopted a newly neutered two-year-old female English Setter with not-quite-championship-material hips from a champion breeder. And so you got the dear thing a new collar and a leash, a couple of doggie dishes and a big ol’ bag of dog food and a box or two of treats, plus a squeaky chew toy for good measure. And as soon as she was answering to “Pony” and lapping up food from her new bowl, you figured you were the full-fledged dog owners you’d long dreamed of being.

Whoa, there, Charlie Brown. You’ve only just begun. There are many, many more things you’ll have to do because of the dog. Among them:

1. You’ll buy the “special” treats.
You’ll decide that your dog is only satisfied by a particular brand of treats–even though the selfsame dog will, in a pinch, happily chow down on a tipped-over box of cereal from the counter, an unguarded pound of butter at a relative’s house, or, might as well admit it, her own excrement. Still, you’ll insist she really loves a particular doggie ambrosia; and because it’s available nowhere else in the city, you’ll drive out of your way one Saturday a month and deign to enter Wal-Mart of all places to buy your pooch’s preferred snack.

2. You’ll buy one of those really fancy doggie beds.
Before too long, you’ll both grow totally sick of waking up in crinkled knots on either side of the bed while the dog dozes in sprawling luxury across the vast swath of comfortable real estate down the centre of the mattress. And though you may have sworn you would never do it, that’s the point at which you will troop down to some big-box behemoth pet ware-house and cough up $69.95 for a fleece-lined, ergonomically sculpted doggie bed that’ll henceforth occupy the foot of your bed, ever at the ready for middle-of-the-night tripping.

3. Your dog will also have a chair.
It’ll be the only place in the living room where she’s truly content, and she’ll glare testily at anyone who dares to sit in it. And, eventually, you’ll find yourselves telling guests, “Oh, don’t sit there–that’s the dog’s chair.” And you’ll mean it.

4. You’ll sing to your dog.
In much the same vein as baby talk with infants and pillow talk with lovers, singing nonsense to your doggie is one of the unqualified joys of dog ownership.

5. You’ll build a fence.
Oh, you’ll think the 40-foot lead you’ve rigged up on the backyard clothesline will do the trick. And while it’ll keep the dog from running away, it’ll also get wrapped around the poplar tree or the rear leg of the barbecue again and again and again, leaving the dog pretzeled and helpless, barking for help from the back forty. So you’ll browbeat one father-in-law into coming out from Nova Scotia for two weeks to help build a fence, and the resulting flurry of activity will inspire the locally based other father-in-law to join the project. And days’ll be taken off work and plans’ll be drawn up and revised and revised again, and industrial-sized motorized equipment will be rented, and a grove of Canadian trees’ll be felled for the timber. But eventually, triumphantly, you’ll have a fence, four-feet high (and no higher, so as to conform to the municipal bylaw). And then you’ll pray that your not-quite-championship-material hunting dog never learns about her genetic endowment for leaping over piles of felled trees up to six-feet high. And then she’ll get away anyway–the first time someone forgets to close the gate–and it’ll cost you $27.50, plus a stern lecture from an animal-control officer to bust the dear runaway shithead out of pokey.

6. You’ll finally have a use for all those plastic shopping bags.
Indeed you’ll become a veritable connoisseur of plastic shopping bags. You’ll know which ones are best at containing odours and which are most likely to have teeny little holes in the bottom. You’ll stoop and you’ll scoop, and repeat ad infinitum for eight to fourteen years–and, by gum, you’ll do it with a smile slapped on your face (or get slapped with a fine).

7. You’ll talk about your dog.
That doesn’t do it justice. Try this: You’ll end up in long, involved chats with people at the dog park about the relative temperaments of various breeds, about visits to the vet, and especially about your darling’s relative aptitude and eagerness for fetching/sleeping/hunting/barking/chewing up your aunt’s brand-new suede slippers. You’ll strike up dog-centred friendships and alliances with every dog-walking person you encounter within two square kilometres of your home. You will, in short, find yourself in frequent, florid conversation with friends and total strangers alike about dogs and dogs alone.

8. You’ll drive across the country.
Okay, this one might just be us. But eventually you’ll have a couple of weddings and a family reunion happening all in one summer, and you’ll wind up driving from coast to coast and home again with an extended stopover on the way back. You’ll use up a lifetime’s worth of your friends’ and family’s goodwill in order to find dog-friendly places to stay en route. You’ll walk your dog in motel parking lots and feed her next to the pumps at gas stations. You’ll do all of this without a second’s hesitation or reluctance because you know that Pony would prefer to be with you in a car and in strange apartments for two months than to stay home and be dog-sat by strangers. And it’s important that she have a nice summer, see?

filed under: pets
< Does Your Partner Care How You Make A Living? Oh, Canada! Dating Styles from Coast to Coast >