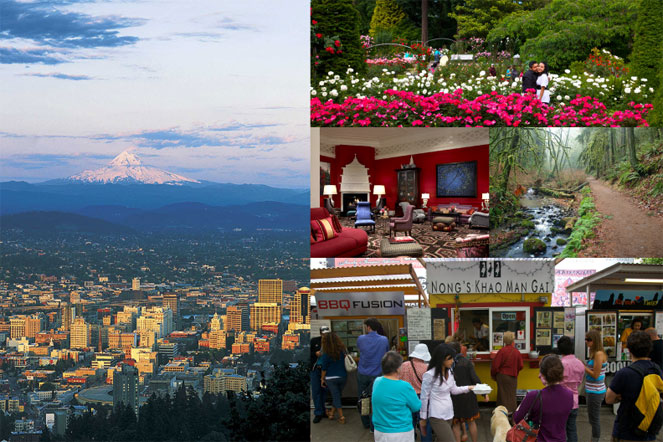 Discover why the birthplace of Portlandia is so much more than a drizzly town of microbrew-guzzling hipsters and tree-hugging vegans.

DAY ONE
Noon
Check into the Hotel Monaco. This funky Kimpton hotel is located downtown, close to the Pearl District, Saturday Market and “Old Town” Chinatown. Mingle with fellow visitors and enjoy a complimentary aperitif at the hotel’s nightly wine socials.

1:00 P.M.
Satiate your grumbling, post-flight bellies with a guided tour of Portland’s famous street fare. Snack on Thai skewers, poutine or Hawaiian-Korean barbecue as your tour guide, Brett Burmeister, briefs you on the history of the city’s curbside eats.

3:00 P.M.
In the early 20th century, Portland had 20 miles of rose-bordered streets, hence its moniker “The City of Roses.” Founded in 1917, Portland’s International Rose Test Garden is the oldest official continuously operated public rose test garden. Stroll through a labyrinth of flowerbeds and sniff a variety of blooms, from the hardy floribunda to the long-stemmed grandiflora.

7:00 P.M.
Bursting with trendy bistros and lounges, Portland’s Pearl District is the place to be after dusk. Try the Clyde Common, a European-style tavern serving non-fussy gourmet in a causal and energizing setting–think barn boards, communal dining and attractive wait staff. Nibble on entrees like mac & cheese or grilled steak with kimchi puree, while some of Portland’s top mixologists shake things up behind the bar.

10:00 A.M.
Located beneath the Burnside Bridge, the Portland Saturday Market is the largest continually operating outdoor arts and crafts market in the U.S. Since its inception in 1974, the market’s become a hot spot for local handicrafts. Browse through aisles of artisans’ goods, from one-of-a-kind jewelry to bamboo musical instruments.

2:00 P.M.
Portland’s been coined “Beervana,” thanks to its 30-plus micro-breweries. But in recent years, the city has also experienced a boom in micro distillers. Distillery Row is home to several independent distillers who handcraft unique, award-winning spirits, from Eastside Distilling‘s Coffee Rum to New Deal Distillery‘s smoky Hot Monkey Pepper-Flavored vodka. Tour their warehouses and enjoy a tasting to discover the “spirit” of the city’s distillation revolution.

7:00 P.M.
You’ll be spent after shopping and “spiritual” exploration, so kick your feet up at one of Portland’s movie brewpubs. Head over to Mission Theater where you can enjoy pub grub and a pint while watching a recent release.

10:00 A.M.
You can’t visit the nation’s most environmentally friendly city without reveling in some of its natural beauty. Only a ten-minute drive from downtown, Forest Park is America’s largest urban wooded area. The park overlooks the scenic Willamette River and boasts more than 70 miles of walking and hiking trails. Diehard trekkers and weekend walkers alike will enjoy the scenery, old-growth forest and abundance of Douglas firs, Oregon’s state tree.

Noon
Reward a brisk morning hike with a warm apple fritter or Portland cream doughnut from the famed Voodoo Doughnuts. While the health department prohibited Voodoo’s earlier NyQuil-glazed and Pepto Bismal-dusted creations, the avant-garde doughnut shop still has many exotic concoctions, including a bacon maple bar, where “the meat greets the sweet!”

1:00 P.M.
You’ve had culture, cocktails and crullers, which means you’re missing one more element to a great vacation: competition! Don a Portland Timbers jersey and root for the city’s Major League Soccer team at Jeld-Wen Field.