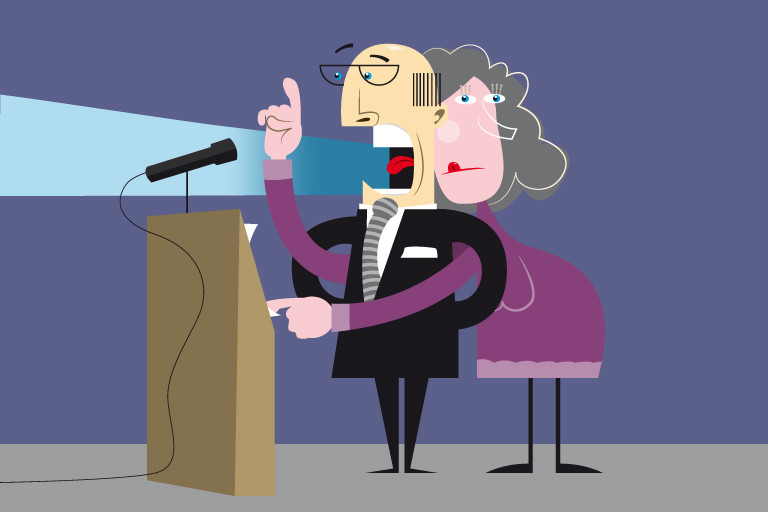 I’m a far cry from being a political junkie. I’d get skewered in any debate about foreign policy, health reform or immigration. But I seem to have been blessed with an idiot savant memory for the personal details of politicians. Like, I can recite the names of their kids going back to Canada’s first prime minister, Sir John A. Macdonald, at the time of Confederation–John, Hugh and Mary. And I have Mensa-level prowess for grasping the intricacies of a political sex scandal.

The stories that fuel my political interest involve male politicians caught fooling around behind the backs of their unsuspecting spouses. I have read everything there is to read on Huma and Anthony, Bill and Hillary, David and Holly and, of course, allegations surrounding Toronto mayor Rob Ford and his wife, Renata. But the question that always seems to go unanswered and leaves me hungry for more is, “what is the relationship deal for these political wives?”

One thing is for sure, the job of a political wife must be a tough one. (I’m not being sexist in singling out male politicians, but female politicians don’t seem to land in hot water as often–perhaps they are too busy doing their jobs, or are just smarter about covering their tracks). The political wife often seems to be making tremendous personal sacrifice in supporting her husband’s career: muzzling her own political opinions; putting her own career on ice; and not being able to give the finger to the driver who cuts in front of her, proper behavior being a job requirement.

Given the extent of her sacrifice, surely it’s not asking too much for her political spouse to keep his pants on–at least until he is safely out of office so she is spared public humiliation and scrutiny. When these gals agree to stand (often awkwardly) by their men as they apologize for their indiscretions, I hope they have negotiated a good relationship deal going forward. If political husbands expect their political wives to give even more of themselves to rebuild their “family man” images, shouldn’t the wives be getting a fair deal in return?

These women have got to know the power they now have. I’d like to know what their new deal is as they re-contract in key relationship buckets such as faithfulness (“Honey, I’m really going to enjoy our open marriage; you were right about needing to mix it up a bit”), dual careers (“When you leave politics in two years, I’m looking forward to you supporting my Harvard MBA and doing 75% of the housework”), fun and leisure (“So excited about you looking after the kids for four weeks while I tour Europe with my besties”) and so on.

I refuse to think of these political spouses who find themselves at the epicenter of their husbands’ sex scandals as poor victims. Rather, I think of them as smart and savvy, as women who understand the power they now have over their husbands’ political fates–and who aren’t afraid to wield this power to their own advantage.

Whatever their deal is for standing by their man, I hope it is a good one.

< WATCH: This Is The True Meaning Of Love What Every Couple Needs To Know About Arguing >