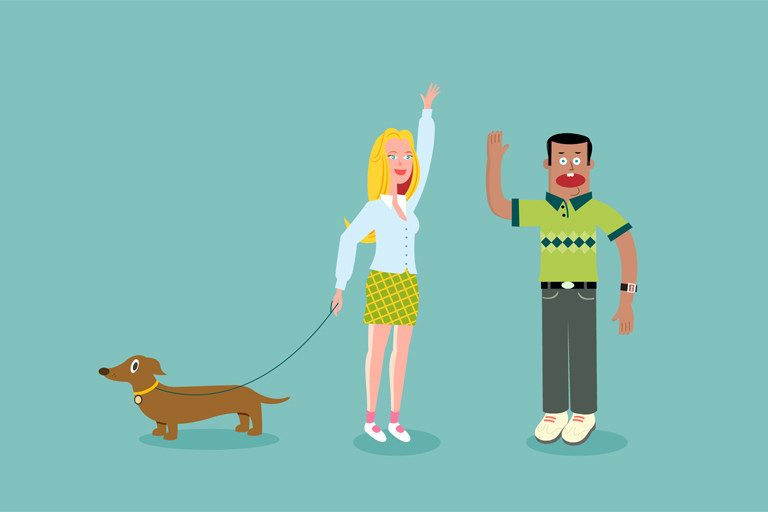 The 19 Best Things to Make Fun of Other Couples For

ADMIT IT:COUPLES can be worse than high-school cliques when it comes to hack-in-the-back cattiness, especially if the target happens to be a fellow twosome. Maybe they’re acquaintances from work, the neighbors across the street or even a pair of your oldest friends. But as soon as the evening’s air kisses have evaporated, you and your not-so-sweetheart can’t help but catalogue their odd and annoying habits. (And you just know they’re doing the same dissection on you.) Here’s a field guide to the kinds of couples that get under our skin. But, of course, we’re not thinking about you…

1. The Honeymoaners
Sure, all couples complain about their relationships. But this pair turn every get-together into a Jerry Springer smackdown.

2. The Trumps
You toured Tuscany; they summited Everest. Your vehicle broke down en route; theirsexploded. For every anecdote you tell, they’ve got one better.

3. The Mullets
Yes, Bon Jovi was a fine band back in junior high, but it’s time this duo broadened their CD collection and loosened their Levi’s. And choosing “You Give Love a Bad Name” as their wedding song was not a good idea.

4. The Re-Gifters
Recognize that Pier 1 placemat set they brought? You should. You gave it to them last Christmas.

5. The Swingers
Well, they’re supposed to be together. So how come she’s flirting with the sommelier and he just slipped the waitress his cell number? And which one is squeezing your knee?

6. The Pet Shop Bores
Yes, please, you’d love to hear about the time their basset hound dry-humped the vet. Again.

7. The Clones
Everyone in khakis. And they mean everyone. This couple have redefined matching tracksuits for this century.

8. The Hard Cells
You’ve got a year’s worth of voicemail rain checks and text-message sorrys. One day you might actually talk to them on something other than a cell.

9. The Zealots
They recently discovered birdwatching, Bikram yoga or Bulgarian cinema, and insist that you join them. Every weekend.

10. The Conspicuous Consummators
Yes, you get it. Their sex life is hotter than Tucson even five years after the “I dos.” But do they have to get sweaty in your powder room before dessert?

11. The Joined-at-the-Hipsters
They’ve got hand stamps from the latest It club, hang out with DJs and video artistes, and dress like extras from The Matrix. Oh yeah, and make you feel about as cool as a substitute teacher.

12. The Breeders
From their emailed JPEGs and baby-talk updates, you’d think they were the first couple on earth to squeeze out a kid. Maybe the first to have one that bug-eyed.

13. The Brunchosauruses
They’re only ever free Sundays, 10 till noon, when they comb the city for the best eggs Benny and blueberry pancakes. If only you gave a crêpe.

14. The Better Haves
Plasma-screen TV. Cottage with lakeside jacuzzi. You can’t keep up with these Joneses without going broke.

15. The Dr. Philistines
They never met a pop theory they didn’t believe and will analyze what ails your relationship, careers and sex life…whether you want to know or not.

16. The Crown Moulders
Their home is their castle–if by “castle” you mean an over-decorated eyesore they can’t stop yakking about.

17. The Brewsome Twosome
Their basement-made wine tastes like paint thinner, but they serve it at every meal. Receiving a bottle is the only excuse for becoming a Re-Gifter (see No. 4).

18. The Silent Partners
Either he finishes her sentences and meals, or she picks his suits and politics, but one half of this lopsided pair will always remain a mystery.

19. The Trophy Couple
They’re corporate VPs who run triathlons, volunteer at the food bank and never forget your birthdays. Ken and Barbie apparently broke up because they couldn’t compete. What isn’t to hate?

< 32 Holiday Bucket List Ideas for Couples Sexy Music Playlist: 50 Quaran-Tunes To Get It On To >