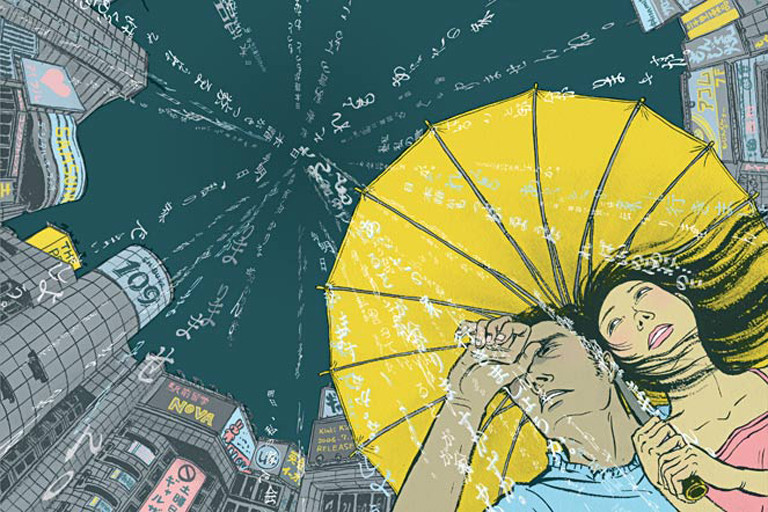 So I walk up to the girl in the Santa skirt and say hello. I do the “Me Tarzan, you Jane” thing because my Japanese is crap, and the ﬁrst thing she says to me is that she got a D in English. So of course I’m like “Perfect. You’re the one.”

This is how I told my friends back home how I met my Japanese girlfriend — like it was a joke.

But maybe that’s appropriate. The story of my relationship with Ayako is like a joke but told backwards, punchline ﬁrst — because you get right to the point when you only have 40 words in common. We had more misunderstandings in our ﬁrst couple of months than in a whole season of Three’s Company. Like the time I called her and said “I’m at your house. Where are you?” and it turned out that she thought we were meeting at my house. (Cue the laugh track.) I mean, the whole thing was so absurd, we had to laugh.

But what was surprising was that there was also intimacy — more than I would’ve thought. And we learned a lot about each other. In some ways, not hiding behind words felt more honest. So I started to wonder whether there might be something to this whole not-being-able-to-talk-to-each-other thing. Wondered if, thanks to the oft-repeated mantra that communication is the key to a successful relationship, we talk too much. Wondered if most of the important stuff should be communicated in other ways: through body language and tone more than with actual words.

It turns out — because if you’re going to get the punchline ﬁrst, you might as well skip to the last page too — that the relationship didn’t work. Of course it didn’t. But it also turns out that I was at least partially right. So the real punchline is this: I dated someone I couldn’t talk to and learned about communication. (Cue the laugh track.)

First, a little background. Being a long-term-relationship type who loves words, I’m an unlikely candidate for this experiment. My previous relationship lasted ﬁve years and was epic in its commitment to honesty and talking things through. Though we met at a part-time job, the friendship grew out of an obsessive long-distance email correspondence and blossomed romantically in person over the course of the next year. We were soul mates, twins, Geminis born a day apart, linked by our compulsive need to understand and be understood. We talked about everything.

But our arguments were also epic. We pored over “issues” in phone conversations that would start at 11 p.m. and end at 4 a.m. We brought up concerns, worked through them and brought them up again two days later. Sometimes these conversations were rewarding, but more often they left us emotionally exhausted. It wasn’t from a lack of trying, but after ﬁve years, we split up, drained.

I fled to Japan four months later, disenchanted and wary. I found myself in a strange country where I couldn’t talk to anyone. But — and I hadn’t expected this — not being able to use words turned out to be a relief. I believed my last relationship had talked itself to death, and Japan was teaching me new ways to connect. I imagined that I would become more attuned to body language and tone, like a blind person who develops their other senses. “I’m going to become a human lie detector,” I thought. “This is going to be great! And I’ll be able to tell everything you’re thinking by peering into your eyes. Words are for babies!”

It turns out that the idea isn’t as crazy as you might think. Several new branches of couples therapy are based on exactly this principle: That what is said is much less important than how it is said. Dr. John Gottman, co-founder of The Gottman Institute and emeritus professor of psychology at the University of Washington, is one proponent of this. He studies how emotions are communicated, and calls the idea that communication and conﬂict resolution are the keys to a successful long-term relationship “perhaps the biggest myth of all.” In the introduction to his book The Seven Principles for Making Marriage Work, he claims to be able to predict (with 91 percent accuracy) whether a couple will stay together within ﬁve minutes of meeting them — all this from their physiology and behavior during conﬂict resolution.

After years of studying the interactions of couples in the Love Lab at the University of Washington, Gottman now certiﬁes therapists in his own brand of counseling. He says only 20 percent of clients at his Relationship Clinic had relapsed nine months later — much lower than the nationwide relapse rate of 30 to 50 percent for standard marital therapy.

Another form of couples therapy, known as Emotionally Focused Couples Therapy (EFT), was co-developed by Dr. Sue Johnson, a professor at the University of Ottawa and director of the Ottawa Marital and Family Institute. During counseling, she hones in on facial expressions, tone and body language to try to discover the true emotions that underlie a couple’s words.

“People get stuck in content,” she explains. “They get into power struggles surrounding who’s right and who’s wrong. They can talk forever about what exactly happened that night. This is what we call ‘getting caught down in the content tube.'”

Johnson tells me about some recent sessions with a couple who didn’t speak English: “What totally fascinated me was that it wasn’t hard to do the stuff I do at all. In fact, I was enthralled by the fact that I could look at the wife’s face and know exactly how she was feeling.”

Ninety percent of very stressed couples who attend EFT show improvement in a two-year follow-up. As Johnson says, it’s more difﬁcult to lie with your eyes and tone of voice than with your words.

This brings me back to Ayako and the Santa skirt. We met at a Christmas soul party, where a hundred people pack themselves into a small club and do the hustle in unison. She was staring at me, and my friends were literally pushing me toward her. (You resort to kindergarten tactics when you can’t rely on language.) Our ﬁrst date was pure fun — all charades and Pictionary. For our next dates, we tried new restaurants and watched English movies with Japanese subtitles. We giggled a lot.

I doubted that it could work long-term. But when a friend told me that some of the most intimate relationships she had known came from couples who had overcome language barriers, I bought it. “Yeah!” I thought. “That’s how everyone else gets it wrong. Talking is for morons!” (In other words, this relationship was my undiscovered country, full of promise and potential. I was the Columbus of coupledom.)

This was misguided, but I did learn a lot. Love, or its more primitive elements — protectiveness, tenderness, closeness — hits faster when you can’t protect yourself with words. You can’t dance around deﬁnitions — “talking,” “dating,” “seeing each other,” “going out” — so you just are. You can’t use words as weapons or armor. I was smitten after the third date. I was amazed at what I was able to glean about her: Aside from the basics (her job, her favorite movies and books, what she thought of George W. Bush), there was also what made her laugh and what didn’t, what made her angry and what embarrassed her. We quickly understood the most fundamental elements of each others’ personalities.

It seems ﬁtting that we never had the breakup conversation — our stick ﬁgure drawings would’ve been too awkward. But, in retrospect, all the signals were there: a frustrated shrug when I asked her what a word meant, a melancholy look when I talked about my family back home. And that’s when I realized the ﬂaw in my utopian romance: emotions conﬂict. It’s normal for someone to look at you lovingly one moment, then angrily the next. Just because you can’t use words to lie doesn’t mean your emotions are consistent. You need words to understand all the things (personal ideology, culture, hopes for the future) that tie the contradictions together. You need words to be able to decide — together — what’s important and what isn’t, what can be compromised and what can’t. Although Gottman and Johnson favour body language and tone as a starting point to uncover the truth behind problems, they use words to ﬁx them.

filed under: advice, travel
< What Does It Mean When Couples Overshare on Facebook? Boyhood >