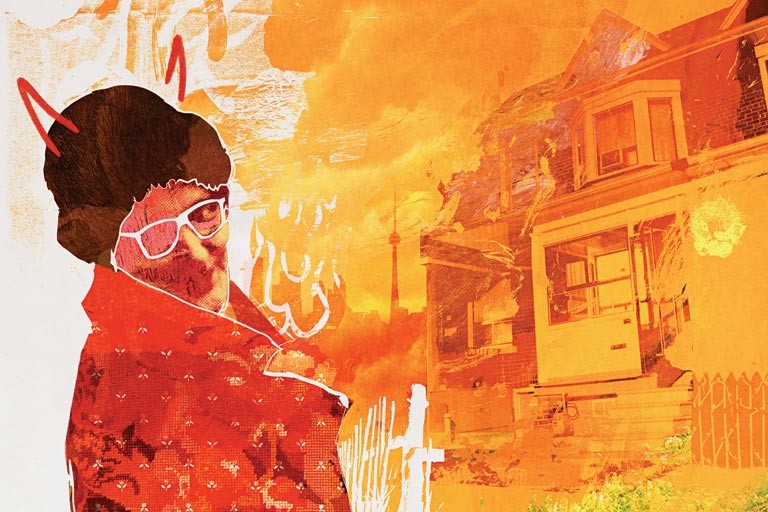 How To Deal With A Neighbor From Hell

A few days after moving into our new semi-detached home, Stefan and I decided it was time to introduce ourselves to our neighbor. We would, after all, be sharing a wall with this woman, and we wanted to make a good impression. We’d learned from the previous owners that Olga* was a widow in her sixties. Sometimes she played her Ukrainian folk music a bit loudly, they told us, but other than that she was harmless.

After unpacking some boxes, we grabbed a bottle of red and headed to the adjacent front door. It was then that I looked around, gripped by the ﬁrst inarticulate twinge of unease. The lawn was weedy and overgrown, with pinwheels and other plastic ornaments poking out in a random array. A large, heart-shaped wreath adorned the front porch, along with pots of plastic ﬂowers and myriad cutesy ﬁgurines. We climbed the stairs and knocked. I peeked through the window beside the door and saw the glow of a television and a pair of slippered feet pointing at us from a sofa along the shared wall. We waited.

A roundish gnome of a woman with a thick Eastern European accent and an air of vitality ﬁnally emerged, wearing a ﬂoral dressing gown. We’d clearly woken her up, though it wasn’t much past 8 p.m. She explained, in the shrill, slightly raspy voice we would come to know so well, that she’d dozed off in front of the TV. We handed her the bottle of wine, and she seemed truly touched, immediately seizing me in a robust embrace.

Soon after, the regular visits from Olga began. It started with banana bread: She appeared on our doorstep Monday, Tuesday and Thursday of one week, each time bearing a freshly baked loaf. We thanked her for the ﬁrst and second loaf, but after the third one we told her we simply couldn’t eat that much cake between the two of us. This, Olga could not accept. Her eyes grew enormous, a mask of incredulity slowly coming over her face. “You don’t like my food? What?!” she bellowed. We stepped back, stunned. “I made this for you. I want to help the nice couple. And you don’t take it? No respect!” she roared. Chastened, we feebly took the offering. We soon learned that it was far easier to accept the baked goods, bits of sausage and jars of soup that Olga proffered than to face her unpredictable wrath. It was becoming clear that the previous owners hadn’t exactly been honest with us when they said she was harmless. The folk music, which Olga did crank, was the least of our woes.

The problem wasn’t so much Olga’s constant gifts of food; it was the often lengthy social calls that followed these bestowals. She would march purposefully into our living room and plop herself down on the sofa, despite protests that we were in the middle of dinner, or busy with chores, or about to go to bed. She’d settle herself in and then lean forward. “I need to talk to you,” she’d declare, before launching into a list of grievances against some neighbor we didn’t know, or lamenting the lack of respect of young people today, one of her favorite topics. Not wanting to be lumped in with this group, we listened politely at ﬁrst, sometimes late into the night. 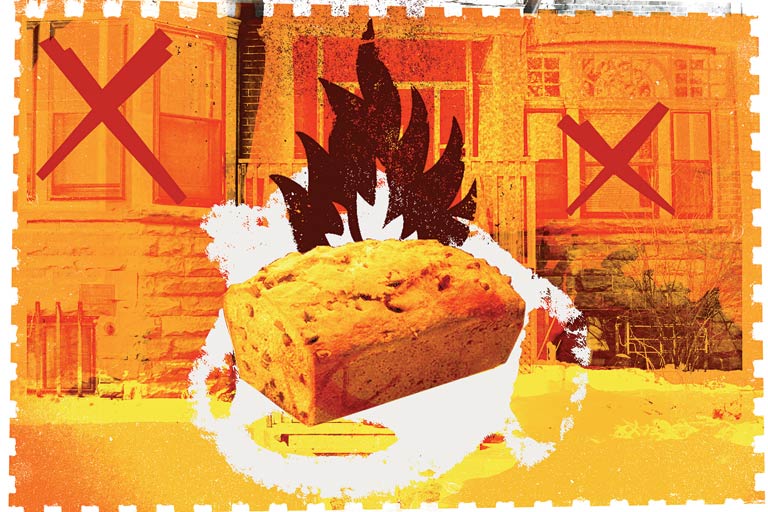 Things got worse. When we happened to mention to Olga that we were having dinner guests one night, she turned up in front of our porch around 7 p.m., clutching a bowl of mixed nuts. Feeling obligated, we invited her to join all of us for appetizers. We realized our mistake when, out of nowhere, Olga began peppering the mostly one-sided conversation with blatantly racist remarks. We were too surprised and bewildered to say anything, and our guests, their frozen smiles fading, seemed mortified.

We decided it would be best to avoid Olga. Unfortunately, she had the uncanny quality that some people possess of seeming to be everywhere. She was on her front lawn, watering her weeds, when we left the house each morning. She was on her porch, ready to ambush us, when we returned. If I happened to walk down to the corner store, I’d inevitably run into Olga walking in the opposite direction. I grew to dread these encounters most of all. Before I had the chance to duck down a side street, Olga would shuffle toward me. “Kristen!” she’d call. (Despite her aggressive displays of affection, she never properly learned my name.) “Hello! Come here! I want to talk to you!” She would hunch her shoulders, stick her ﬁnger in my face and begin one of her rants. I learned to keep my hands behind my back in her presence–otherwise she’d grab my wrist and shake it when she had a particularly salient point to make. Since these meetings usually ended with an invitation to dinner, I always kept a stock of excuses on the tip of my tongue.

Our romantic Saturday morning strolls would deteriorate swiftly into arguments after we’d run into Olga, which we almost always did. Stefan, who was better at being curt with her than I was, would scowl at me afterward. “You did it again,” he’d accuse. “You were too nice to her. You encouraged her.”

However, initially, she didn’t appear to be lonely. In fact, she seemed to know everyone on our street. I often saw her intercepting people as they walked by her house, running into their paths to strike up a conversation with them. But when I observed these exchanges more closely, I noticed the passers-by all wore the same expression: They looked like cornered rabbits, ready to ﬂee as soon as an opportunity arose.

We, too, wanted to escape from Olga. So we began making adjustments, all in the name of keeping her at bay. “Let’s move our TV to the second ﬂoor,” I suggested. “That way she won’t hear it and know we’re in when she comes to the door.”

“Why don’t we start using the side door so she won’t know when we’re coming and going?” Stefan proposed.

We actually stopped using the front porch altogether, unless it was very late and very dark.

But no matter what we did, the near daily poundings on the front door continued unabated. Sometimes we remained very quiet when she knocked, hoping she’d get the hint and go away. Other times, when she was particularly persistent, we’d go outside and explain that we were really too busy for a visit. Nothing we said seemed to deter her for more than that day. At a loss, we began talking about selling the house.

The turning point came one night in the spring. We arrived home late to ﬁnd our front door mat in a puddle in the middle of our walkway. The wooden porch, recently resurfaced, was also sopping wet, along with the window and the front door itself. When we opened the door, we noticed some water had seeped through the gap and onto the living room ﬂoor. Evidently, Olga had been “cleaning” our porch again. We’d caught her out there a couple of times before, hosing things down. We’d asked her politely more than once to stop.

“That’s it,” Stefan said resolutely. “She needs to stay off our property!” The next morning, we knocked on her door. She appeared a few seconds later, beaming. “Did you see?” she asked. “I washed your porch for you. I like to help the nice couple.”

“Olga,” Stefan began. “That’s what we’re here to talk about. We’ve asked you before to please stop doing that.”

“I try and help you, and you don’t appreciate it?!” Olga demanded, her face reddening. “You don’t say thank you?”

“It’s not that we don’t appreciate your good intentions,” I offered lamely. “It’s that we’d prefer to clean our porch ourselves. Like we told you before.”

We were determined not to buckle. “Olga,” Stefan said ﬁrmly. “We are asking you again. Please do not touch our porch. Please stay off our porch.”

The conversation did not end well. Still not convinced that Olga’s behavior would change, we tracked down her son’s work number and called. We told him we needed some advice on how to deal with his mother. He turned out to be amazingly understanding, explaining that Olga had a long history of run-ins with neighbors. Though he didn’t promise his mother would leave us alone, he offered to speak to her on our behalf.

Whatever he said to her worked. Olga doesn’t talk to us at all these days. Instead of rushing toward us when we get home from work, she scurries inside. When we pass each other on the street, she doesn’t even look at us. It’s a little awkward, yes, but mostly it’s a relief, a lesser of two evils. And we’re enjoying our weekend walks again. I’ve even started sitting on the porch–just for short stints, mind you, and still with a vague sense of foreboding. But for now, we’re going to keep the house. It ﬁnally feels like ours.

*Olga is not her real name

As originally featured on 2forcouples.com