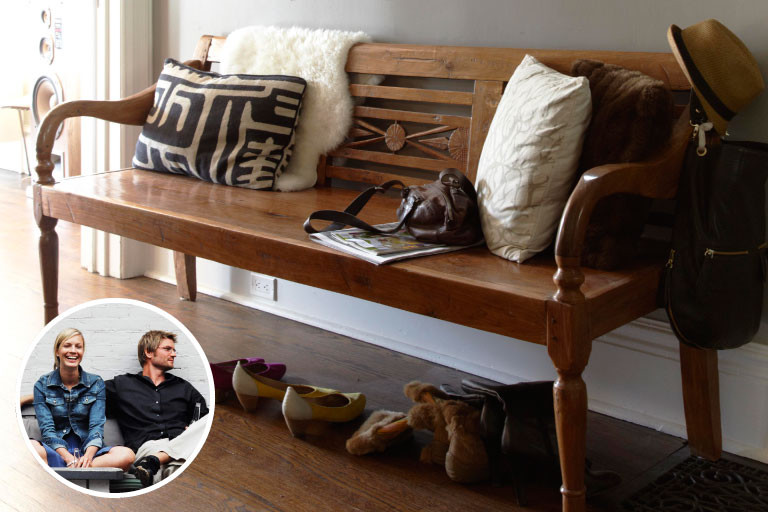 Sometimes you have to wait for the right house to come along. That’s what Sarah Keenleyside and Jesse Boyer learned when they went searching for a home two and half years ago. After losing out on a number of places in a hot housing market, the couple came across this charming house that hadn’t been touched in a hundred years. Sarah, a talented designer, and Jesse, an industrious do-it-yourselfer, saw past the fifteen layers of paint and dated wallpaper to see the house that it could be. And thank goodness they did! 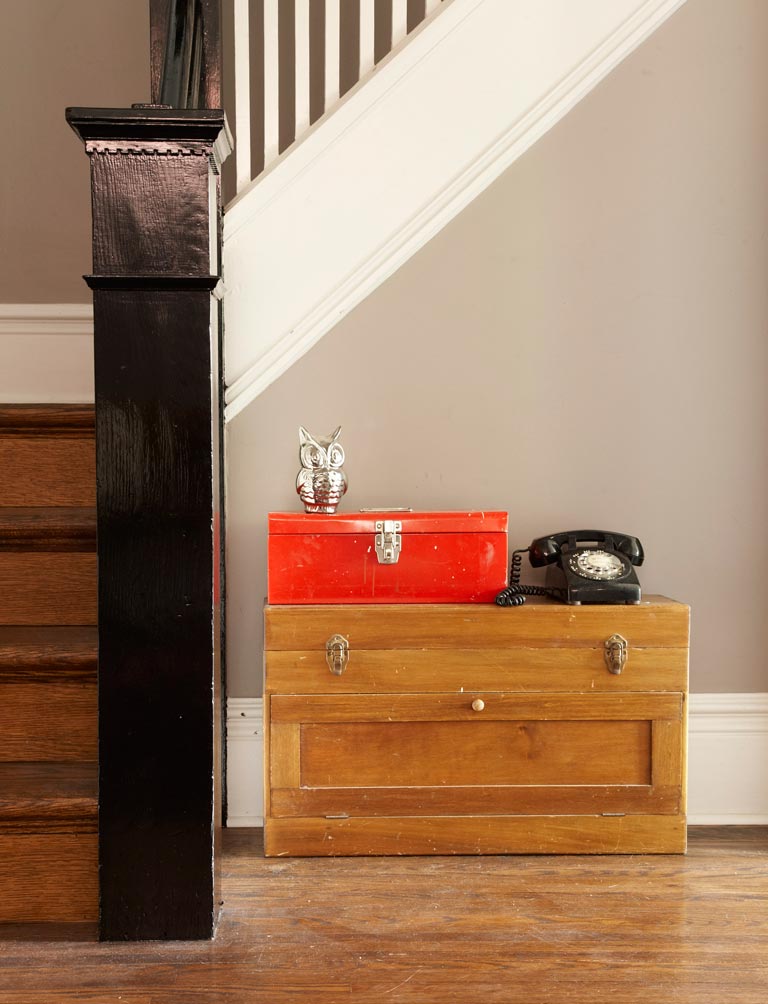 Occupations: Sarah is the Principal Designer and co-owner of Qanuk Interiors (named after an Inuit word that means “snow”) and Jesse is an entrepreneur who really knows his way around old brick houses.

Dwelling: A three-story, semi-detached home in an up-and-coming neighborhood. 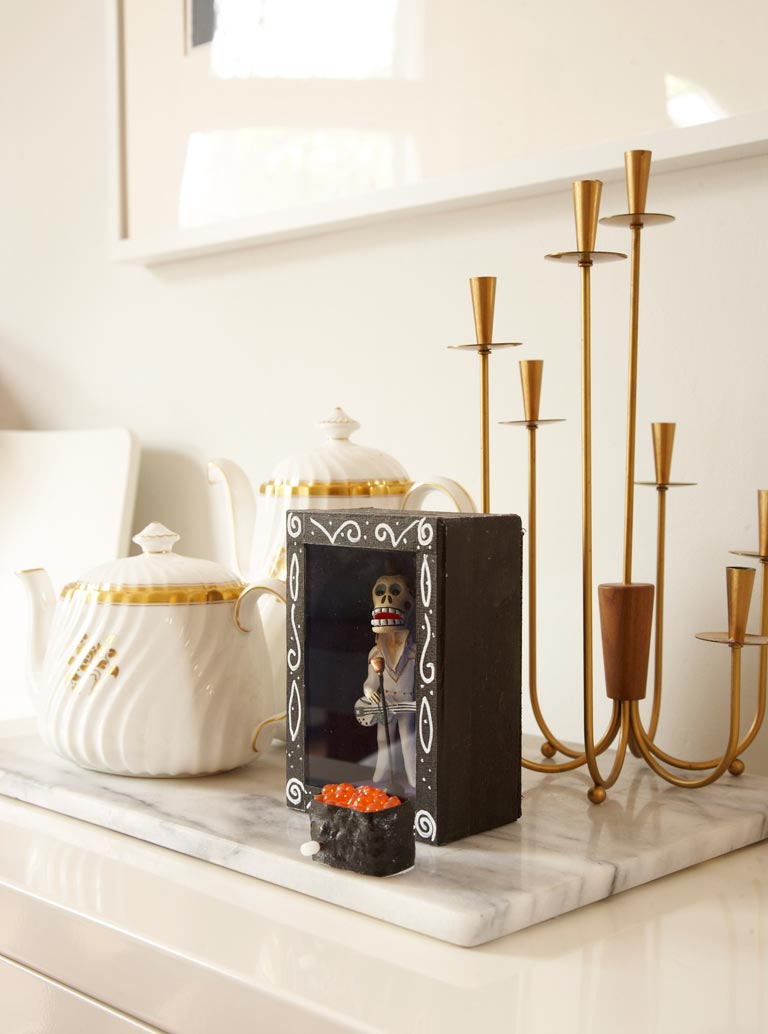 How long have you lived in your home?
Two and a half years. 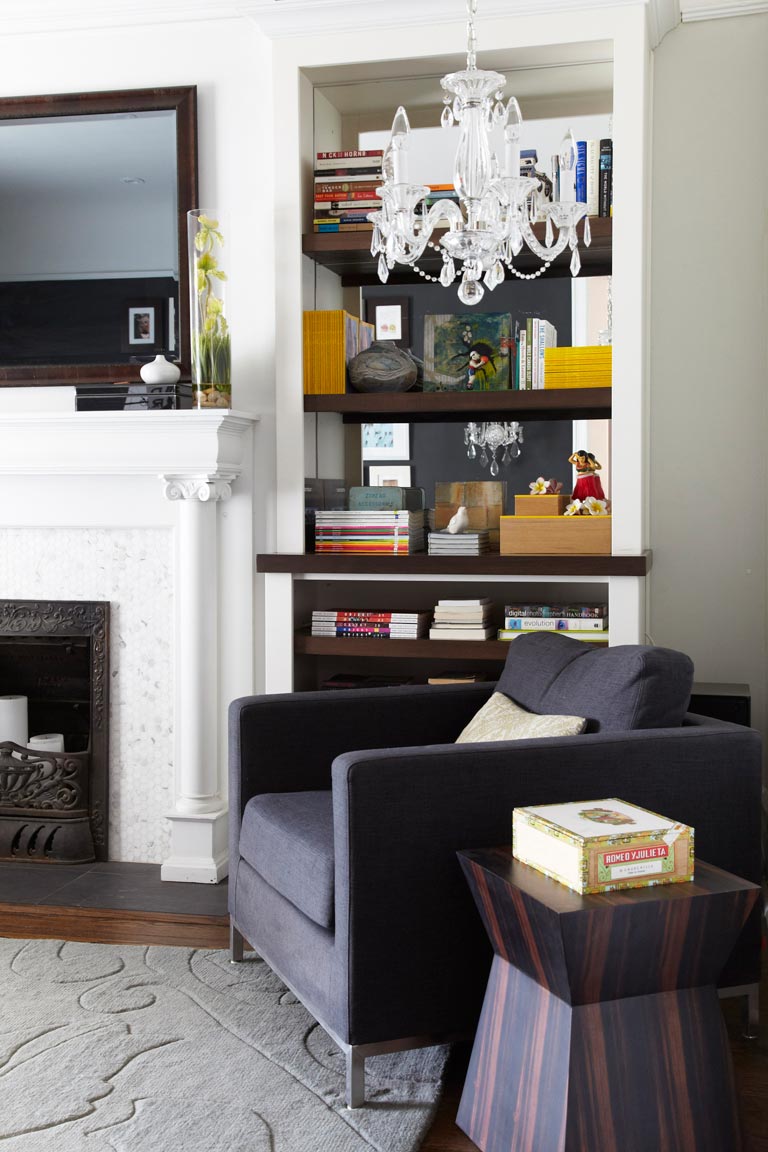 Any kids or pets?
Soda, our 8-year-old chocolate Lab.

What’s your favorite room and why?
Sarah: I would have to say the kitchen/dining room. We opened up the wall between the two rooms because we knew that we would rarely use the formal dining room. I love that we were able to alter the room functions of the home to suit our lifestyle, but still keep the original character. This is the space where friends and family gather and I get to eat breakfast every morning with my “soul mate” — the chandelier that hangs overhead. So fancy!

Jesse: I have always been attracted to third floors and this house has a great one. It was originally three rooms, but previous owners knocked down walls and made it one room, with a bathroom and kitchen. We kept the bathroom and updated it with a new floor, toilet and sink. We also used original cedar tongue and groove planks that were used as partition walls in the basement as a wall treatment on one wall. This looks very cool. We got rid of the kitchen entirely. We use the space as a TV-watching area, an office and a small exercising area. 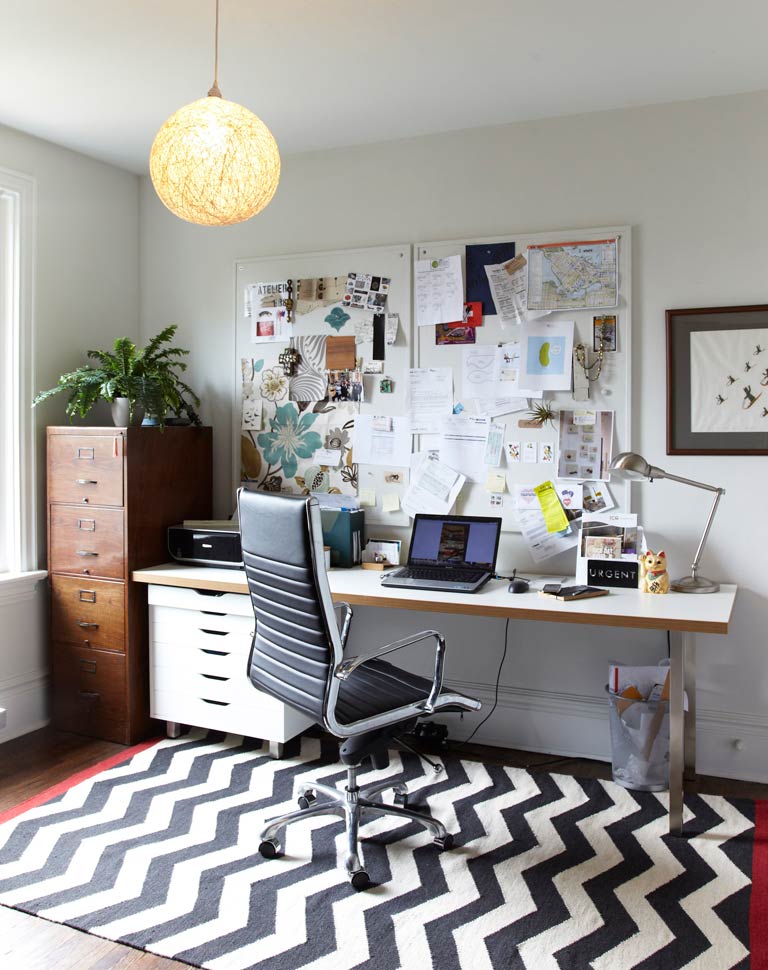 How did you find your home? Had you been looking for a long time?
Sarah: We had been looking for six months. We had offered on a couple of houses, but lost in bidding wars. When we found this listing, we both loved the house. The layout was very unique and we instantly realized that this was why we didn’t get those other houses. I am an interior designer and love to get my hands dirty, and Jesse has renovated several investment properties over the years. We fought for it and the only condition we put on the offer was to please include all of the old doors that were covered in cobwebs in the basement. 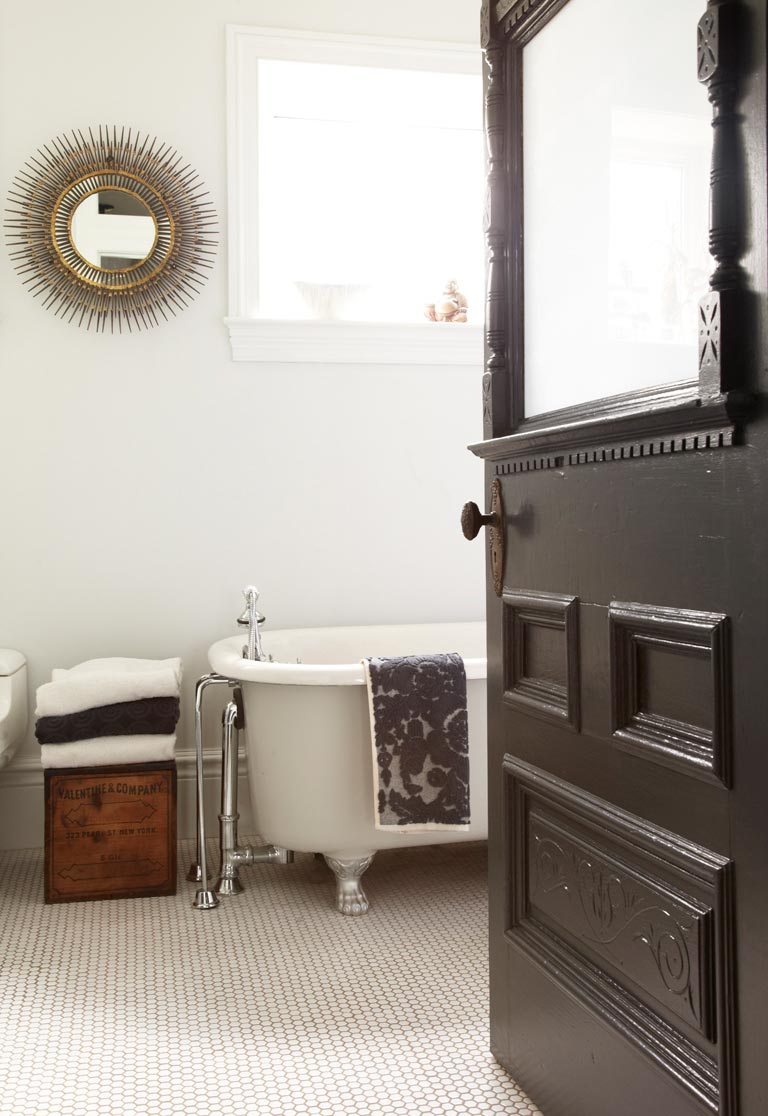 Where do you find inspiration?
Sarah: The bad answer is everywhere and anything, but it’s true. I think I can credit a lot of my design aesthetic to my Grandma Keenleyside. Bernice was straight out of Mad Men and my grandparents’ home was this incredible mix of mid-century modern, West Coast Native artwork (Grandpa was from Vancouver), Indonesian and Chinese carved wood pieces, Persian rugs and travel kitsch. I kind of live by the rule that anything goes if it feels good, has a story and/or makes you smile. I try not to follow trends, but fashion is a constant inspiration for fabric mixing, and jewelry design is a constant inspiration for lighting.

Jesse: I’m not so specific about where my design ideas come from. It probably comes from touring renovations and other houses. I have definitely learned what I like through trial and error. Sarah, of course, is a big influence. 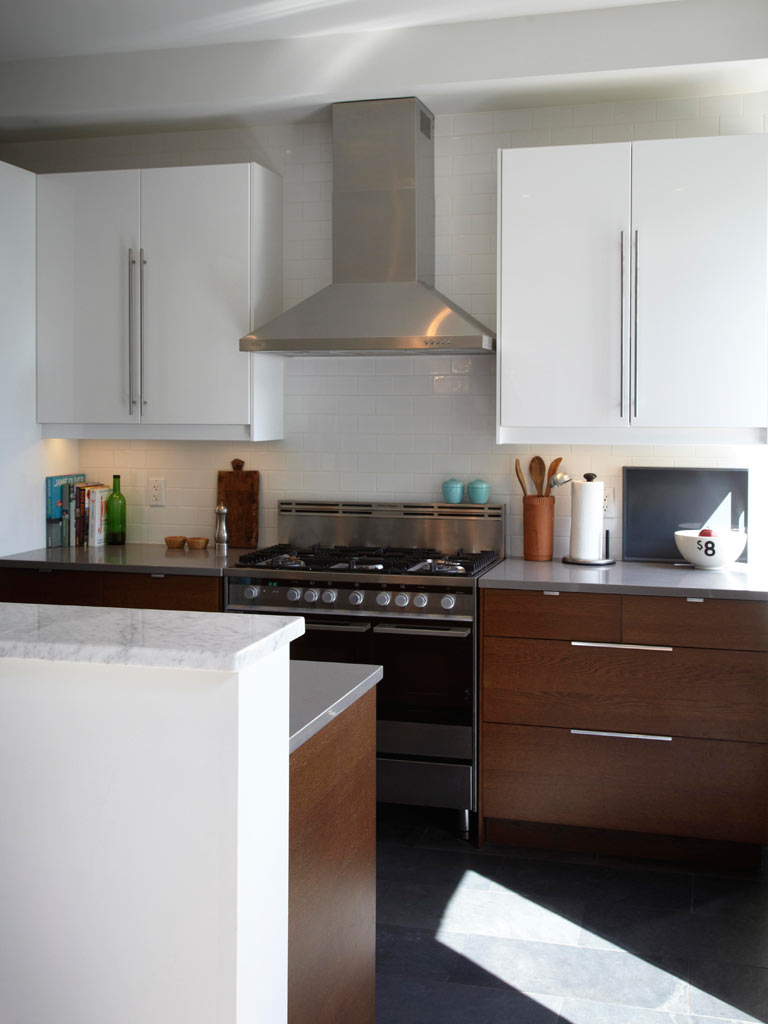 What did your home look like when you first saw it? What work have you done on it to make it your own?
Sarah: Jesse and I combined have touched every single inch of this home. Jesse worked on the house full-time for eight months straight! Nothing had been updated, so we had to replace all of the electrical work and plumbing. One of the biggest things we did was to knock off the back mudroom extension, which let more light into the dining and kitchen areas and really enhanced the view of the backyard. We fully renovated the kitchen (IKEA) and opened up the wall between the kitchen and dining room. The second floor bathroom was a tiny toilet-only room, with a tub and vanity in the room beside. We combined the two rooms to create a more functional washroom and reused the original back door of the house as the washroom door. We replaced all of the windows, which felt like a crime, but they were not efficient, and we converted the unfinished basement into a cool one-bedroom rental unit. We did a polished concrete floor down there and I know that Jesse is jealous that our tenants get to enjoy it and we don’t. 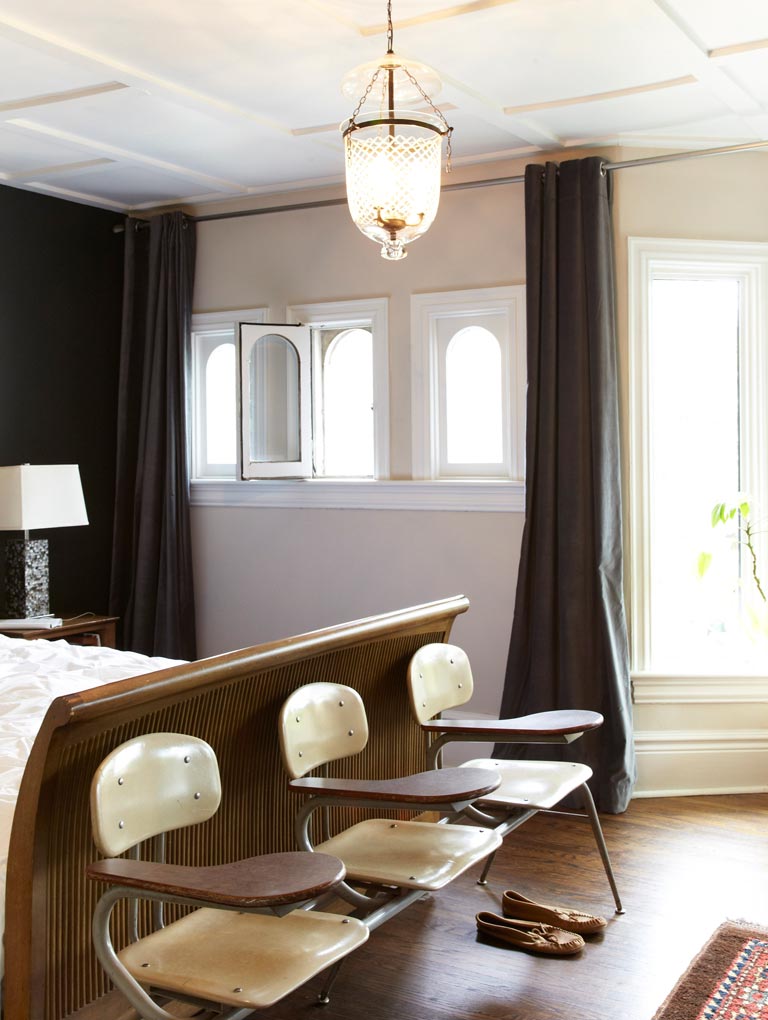 What would your dream house look like?
Sarah: A lot like this! Maybe with a finished exterior, though. We haven’t really had time to get around to that yet. Sorry, neighbors!

Jesse: I agree with Sarah, but maybe a little more modern. As much as I like the original plaster walls, they aren’t very efficient. So my dream house would be better insulated (not very sexy, I know) and maybe with in-floor heating and hot water on demand.

What was the last thing you purchased for your home?
Sarah: This great brass candelabra set from the ’60s.

Jesse: Cedar decking boards for the front porch, which we’re finally starting to work on. 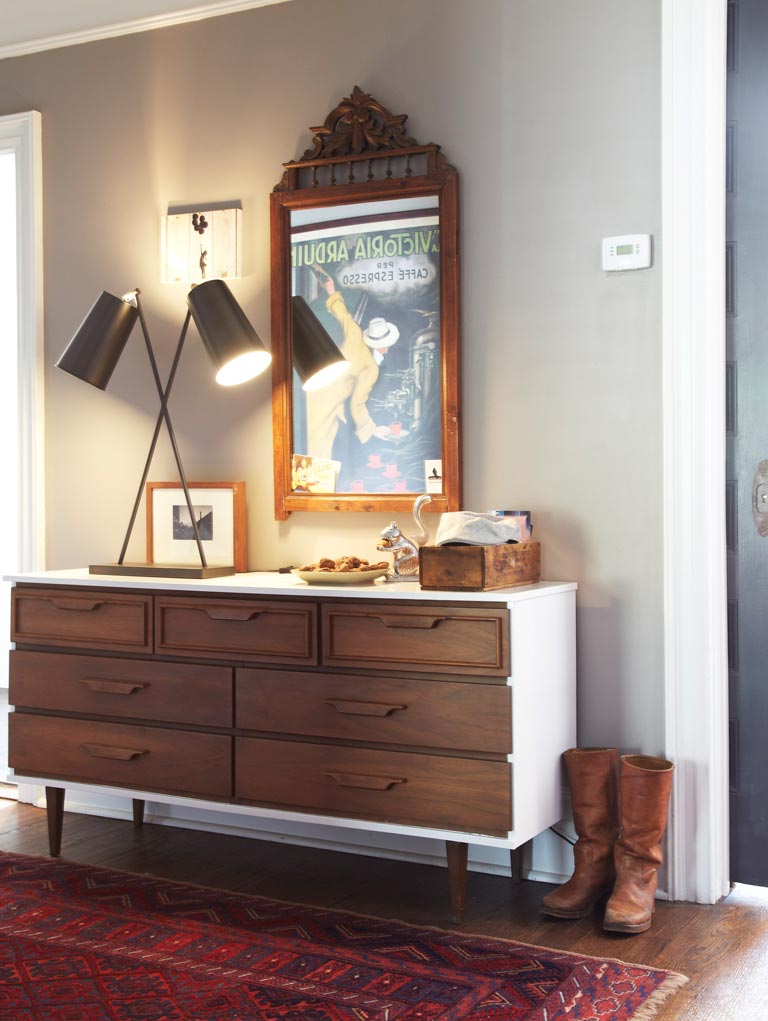 As featured on The Marion House Book, a buzz-worthy blog and collection of stories devoted to interior design, cooking, baking and DIY stuff.

filed under: decor, home tour
< New Issue Of Covet Garden Is The Bees’ Knees Get the Look: Modern Love >