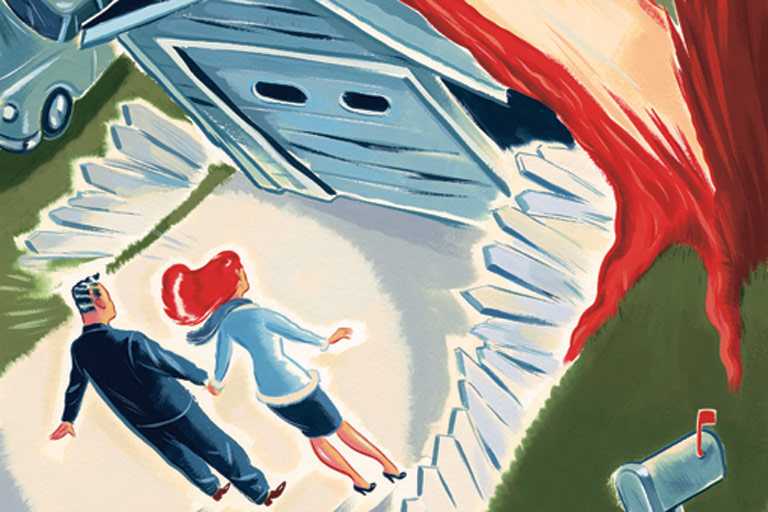 Home Insurance: Has It REALLY Got You Covered?

One fine night, as my brother, Michael, and his girlfriend, Barbara, were dropped off at home after a night out, they began to wonder how much beer they’d poured back at the local pub. The scene seemed oddly off-kilter. But it wasn’t their blood-alcohol level or even their night vision–their once-free-standing garage really had acquired a Tower of Pisa tilt.

“Hmmm, that’s not right,” my brother announced. That his girl­friend didn’t slug him for such a monumental understatement says more about their relationship than their eventual vows.

The culprit behind the garage’s new skew, they discovered, was a century-old split-trunk oak tree that once shadowed their entire backyard. The tree had snapped like a wishbone while they’d been out. One half had dropped against the back of the garage, like the ﬁnger of God, trapping their Jetta inside and pinning the neighbors’ sedan under the garage wall’s new 45-degree pitch. The fallen oak had ricocheted off the garage and smashed not one, but two sets of fences, before ﬁnally spearing the windshield of the next neighbors’ car like a campﬁre weenie on a stick. The remaining half-tree towered into the dark sky, possibly ready to topple in the opposite direction.

Okay, this was bad, they thought. More troubling, though, was having to admit that our mother–Her Highness of Hypochondria–had been right after all. Six months earlier, Ma Gloom had scrutinized, with maternal paranoia, the broad arms of the old oak tree that had been one of the attractions of their ﬁrst house. She saw years of pruning fees and maybe other surprises. “That tree,” she had warned them, “is going to cost a lot of money.”

Thumbing through the details of his home insurance policy, my brother was about to learn how much.

Buying insurance has to be one of the strangest transactions you can perform as a couple. Think about it: Every romantic relationship is a supreme act of optimism, a leap of faith in which two people scoff at divorce stats and ugly break-up tales and say, “That won’t happen to us.” The insurance industry, on the other hand, is built on a foundation of profound pessimism. Whenever you take out a policy–home, car, life or travel–you’re saying: Despite our good judgment, careful planning and enduring love, something bad is bound to happen to us between now and our fairy-tale ending. We don’t know what. We don’t know when. But one day when we least expect it, the odds will come a knockin’ on our triple-deadbolted panic-room door and beat us like a tin drum. And when that happens, we want someone else to mop up the mess.

The trauma of a home breakdown (or worse, break-in) can strain any relationship. But the added stress of ﬁling an insurance claim, especially when loopholes in your policy suddenly leave you and your shared savings hung out to dry, can push even the most optimistic twosome to the brink.

Like all homeowners, my brother and his girlfriend had to take out insurance to qualify for their ﬁrst mortgage. And like many homes, theirs contained a few quirks. First, there was the knob-and-tube wiring (an older style of electrical work that nervous insurers worry is as safe as insulating your house with oily rags), which had to be replaced. And then they found out that whenever it stormed they needed rubber boots to navigate their basement.

Even with these surprises, they never expected an urgent midnight visit from someone to assess damages just six months after moving in. Who does? That night, a contractor dashed over to check out the oaky carnage. He insisted that Michael and Barbara didn’t need to rush any repairs–even though their neighbors’ yards looked like a tornado had struck a Popsicle-stick factory and the remaining half-tree threatened to obliterate more property. Barbara wondered if it was even safe to sleep in their own house that night.

Finally, they made an emergency weekend call to one of the city’s top arborists, who assured them the insurance company would cover all clean-up costs. He arrived with a cherry picker, a boom crane, a chipper, a stump grinder and a team of workers wielding chainsaws on poles who swarmed the scene like hungry termites. Three days later, everything had disappeared but the bill.

“Wow, sixteen hundred bucks,” I said when my brother told me the tree-removal fee. “That’s a lot.”

“No, you didn’t hear me right,” he replied. “It’s sixteen thousand.”

That’s when things got messy again. The insurance company was willing to pay to erect a new $20,000 garage, mend the fences and ﬁx the cars. But the company balked at the 16 large for the arborist’s bill. Removing the fallen lumber from the ground and the still-standing half-tree, according to their close reading of the policy, were yard maintenance issues–like cutting your lawn or trimming your branches–rather than repair of damaged property covered by insurance. 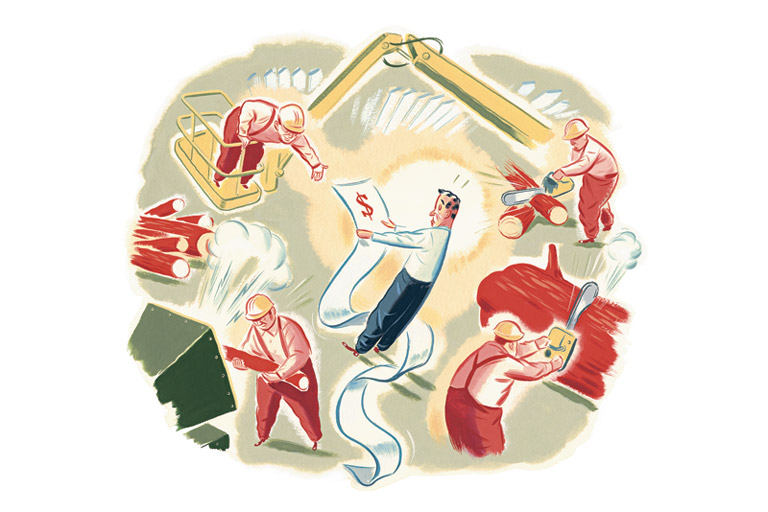 My brother had one advantage over most guys: His girlfriend was a lawyer, and she wasn’t about to get stiffed without a showdown. In many insurance claims, there’s often a better settlement hiding behind Door No. 2, so they negotiated through their insurance broker until the company they used ﬁnally agreed to go dutch. The insurer paid for removing the fallen tree, while my brother and his girlfriend covered the cost of making sure the rest of the oak didn’t trash any more of their neighbors’ property.

The $8K bill was still a big ﬁnancial hit for a young couple. But they realized the fallout from the unexpected O-bomb could have been far, far worse than a bushwhacked bank account. That ill-fated evening, their next-door neighbor had been sitting on his back patio with his year-old son and had returned inside only an hour before the oak came crashing across his yard. There had been no wind, no lightning, no warning–just a rotten core that couldn’t be seen until the tree took its ﬁnal tumble.

In the end, my brother and his girlfriend found a happyish ending: They got a new garage. With the big oak gone, rain-swollen acorns no longer plugged the drains, and their basement ﬁnally stopped ﬂooding. By some miracle of the insurance industry, their premiums didn’t jack up. And our mom, satisfied with her powers of prediction, turned her domestic worries in my direction.

Most importantly, the two of them cracked a Zen puzzle that has haunted couples for centuries: If a tree falls on your relationship and you still pull through together, it must mean you’re both pretty damn sound.

As originally featured on 2forcouples.com

< How Will Being Landlords Affect Your Relationship? Home Tour: Couple’s Modern DIY Reno >