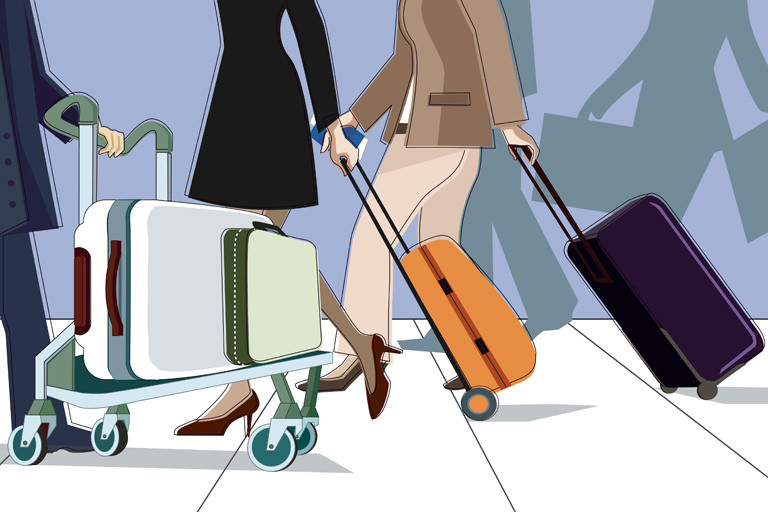 There is little worse than being in an airport at Christmas. Everyone is running… everywhere. You cannot turn around without someone sneezing and/or coughing directly in your face. Flights are cancelled or delayed, turning people into angry, name-calling thugs, who will patiently wait in line only to unleash their fury on some random airline official. Oversize carry-on bags are jammed into tiny overhead compartments, only to be removed by a flight attendant, leading to yet another outraged patron.

And then there is the actual flight. I don’t think I need to go into detail about the lack of legroom, or how you cannot go to the bathroom when that stupid cart is serving tomato juice, or even about the shocking price of Twizzlers. (Which, by the way, you cannot pay for with cash because the attendant whispers like a naughty secret, “This is a cashless flight.” So now I have to be reminded that I paid four dollars for Twizzlers when I get my credit card statement? Thanks for that.)

I know I sound pessimistic, but the truth is, for the vast majority of people traveling during the holidays, I have a message of hope and joy that I would like to share! Until my “enlightenment” just a few short years ago, I was like you. Complaining about having to pay for meals and headsets. Rolling my eyes when the captain announced that we were going to have to sit tight while they de-iced the plane. But now, after traveling with two children under the age of five multiple times during Christmas, I can only stand amazed that more adults traveling without toddlers are not skipping through security, throwing out the last two sips of their water bottle with glee (it’s water… you do realize there is more on the plane, right?) and whistling a tune as they are asked to take off their shoes, belt and any other article of clothing that will take forever to put back on.

I just have to say it: I am so envious of you. You, who do not drag behind you the slowest moving things on this God-given earth that refuse to look in front of them. (They will literally walk right into someone, not once, not twice, but multiple times. The collisions do not deter them from looking anywhere but forward and have often made me wonder if I could be that crazy mom sporting a leash.) You, who stop at the airport Starbucks to grab a little cup of delicious energy before boarding your flight because, hey, it’s not like a small, blonde-headed, monster will inevitably knock your hand, spill the drink and make it look like you peed yourself.  You, who seem so frustrated when you cannot find a good movie to watch on your tiny chair screen and sigh as you have to take out a book. (A book. You get to read a book.)  You, who might actually go the entire flight without ever going to the bathroom and will absolutely not have to change a diaper on the smallest change table known to man. (And, although you are slightly annoyed that you can’t go to the bathroom when the seat belt sign is on, you are not breaking into cold sweats, praying that the toddler who is seated on your lap does not have a potty training relapse.)

You, the lucky travelers with sleep creases on your face. If it wasn’t creepy, I would touch them. I would let my fingers trace the marvelous lines on your well-rested face. I would look deep into your eyes, saying nothing, but somehow, conveying everything.

But that is creepy. So, I wrote it down instead.

Merry Christmas. Enjoy your holidays. Enjoy time with your family. And for everything that is holy, if you are traveling without kids this holiday season, enjoy every last minute of your delayed, jam-packed, overpriced, underwhelming flight.

Kara Kootstra hates work. As luck would have it, people seem willing to compensate her to write children’s books, teach piano lessons and make gourmet cupcakes. A happily married woman (except for when her husband makes fun of her for reading Twilight), Kara is a mother to Claire, a girl who wears fairy wings to the grocery store and Nate, a four-year-old who is famous for his use of wordplay.

filed under: kids
< How To Travel Together The Ultimate Road Trip For Nature Lovers >