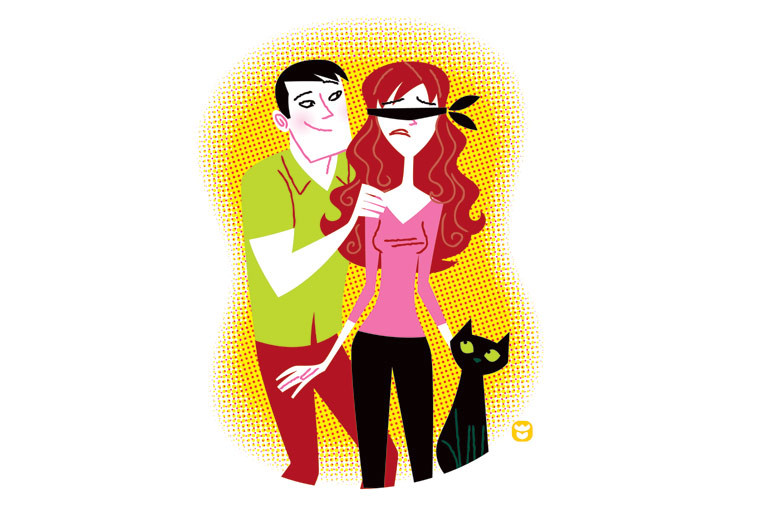 How To Plan A Romantic Anniversary Surprise

My wife hates surprises. Unless the surprise is on me. Nine out of 10 times, when I walk into our apartment, she hides behind something, then pounces on me like a ninja. Scares the crap out of me. But if I ever try and surprise her? Good luck. The woman plans like a general, so surprises tend to annoy her. She once warned me, “Don’t ever throw me a surprise party. If you do, I’ll divorce you so fast you’ll think you got hit by a truck.”

So as our fifth anniversary approached, I was in a quandary. This was our first big marital milestone, the do-or-die anniversary. Our normal anniversary dinner (a table for two at her favorite restaurant) just didn’t seem good enough for my sweetheart. I wanted to wow her with something fresh and wild–and possibly illegal.

I threw caution to the wind and came up with the perfect anniversary surprise. I crafted my plan months in advance, telling her not to worry about a thing, as I was handling our anniversary plans this year. That didn’t assure her–at all. I told her we’d have a nice mellow weekend together. I’d take care of everything. She wouldn’t have to lift a finger.

Then I launched my misdirection campaign. For weeks, I artfully distracted her with a tapestry of lies. First, I hinted she’d need a bikini for the lake. Then I said she might be bathing in rose petals at a local hotel. Finally, two days before our anniversary, I instructed her to pack an overnight bag and be ready for anything at 5 p.m. on Friday.

Come Friday, my plan shifted into high gear. Instead of meeting her at five, I took a taxi to her office just before lunch. At noon sharp, my wife’s boss (who was in on my secret) invited her to go for coffee. (Note: In retrospect, not a great idea. They’d never gone for coffee before, so my wife thought she was getting fired!)

As they left the building, I called my wife’s cell and told her to close her eyes. Then I ran up, blindfolded her, and stuffed her into a waiting taxi. Yep, I kidnapped my wife in broad daylight.

I kept the blindfold on her while the taxi driver kept mum. When we got to our destination, I whipped off the blindfold to reveal the airport departures’ sign. I said “Baby, here’s your passport… because I’m flying you to New York for a romantic weekend getaway!” She shrieked and hugged me.

We flew to Newark, and then took a (surprisingly cheap) helicopter into Manhattan. When I opened the door to our Soho hotel suite (I’d asked for a fifth floor room but the manager upgraded us to the penthouse), my wife literally jumped around and yelled for joy. Brick walls. Hardwood floors. Soaring ceilings. And a king-size bed. The smile on my wife’s face was magical.

You’re probably thinking to yourself, “That guy is so gonna get laid,” right? Wrong! Minutes after we entered the suite, my wife got sucker-punched by the flu. She spent the weekend shivering and moaning under the covers (not in the good way). The only time she left the room was when I dragged her to see a doctor on the Upper West Side. But since I’d forgotten to buy travel insurance, the jerk made her cry when he gouged us for hundreds of dollars for a five-minute consult.

So, what’s the moral of this story? Even the world’s perfect anniversary surprise is powerless against a surprise visit from a killer virus. So lesson No. 1: Get your flu shot. But lesson No. 2: If you hold her hand, stroke her forehead and feed her plenty of fluids, she’ll love you even more.

Plan the perfect anniversary surprise with these helpful DO’s and DON’Ts!