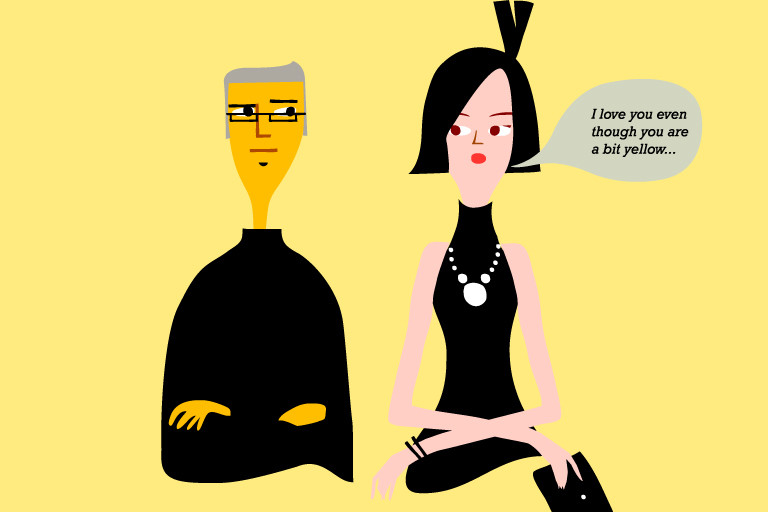 Why You Should Marry Someone For Their Faults

I was at a dinner party last weekend at the home of my friends Sharon and Frank. The food is always fabulous. This time our meal began with a delicate roasted cauliflower soup drizzled with a smoked cumin and coriander puree, and took off from there. Everything went so nicely with the newly released 2012 Australian red that Frank rushed to the LCBO to buy earlier that day.

But this fabulous meal is not what I’ve been digesting all week. It is something my friend Kathleen shared during the main course of our conversation. We were talking about “relationships” (what else). Her Quebec aunt had told her many years ago, “Don’t marry someone for their good qualities, marry them for their faults.”

What sage advice. It’s easy to live with our partner’s good qualities obviously, but you have to be able to embrace their bad ones too.

Today I sat down to make a list of the faults that I knew my husband had before I said, “I do.”
• He doesn’t make a fuss about my birthday. He believes me when I tell him I don’t want anything special.
• He doesn’t recycle. We look like hoarders albeit intelligent ones with everything from the New Yorker to Downbeat occupying every square inch of our home.
• He is slow in the kitchen. I can make a four course meal in the time it takes him to chop an onion. And he only starts to open the bottle of wine after we sit down for dinner.
• He doesn’t stress about money. I live in fear of having to eat cat food in our old age whereas he doesn’t see a problem–hence his addiction to books, magazines, CD’s, etc. And he never buys anything on sale.
• He doesn’t argue. He would rather avoid conflict, as is the Anglo way (which is in direct conflict with my own fiery cultural background). We have never had make-up sex.

Ok, that was cathartic.

Let me share something with you. There are a few things on the list above that drive me past the point of sanity. Take the first bullet. I stop talking to my husband on December 31st every year in anticipation that he will muck up another one of my January 3rd birthdays. I pout until January 17th and say “nothing” when he repeatedly asks in a very concerned voice, “What’s wrong?” (Yes, he really is that daft.)

But as I look at this list of my husband’s faults starkly laid out in black and white, perhaps I should view them in the new light of Kathleen’s aunt’s advice. I was well aware of his “faults” going into my marriage, and clearly they weren’t deal breakers then. So why do I make a federal case out of them now?

Some of his faults speak more to my intolerance than his shortcomings. Should there really be a competition for who can chop an onion quicker? And other faults could be re-packaged as endearing ones like his passion for music and literature (even if it means he only recycles when we can’t find our dog and we suspect she’s pinned under an avalanche of New Yorker magazines).

When we decide to marry, we gush about our partner’s great qualities. But, how many of us take critical stock of our partner’s “bad” ones–and marry them not despite them but because of them? It’s more than semantics. It’s a subtle shift in our psychology that can make a big difference to our emotional connection.

My birthday is coming up. Perhaps I should just tell him I really do want a fuss!