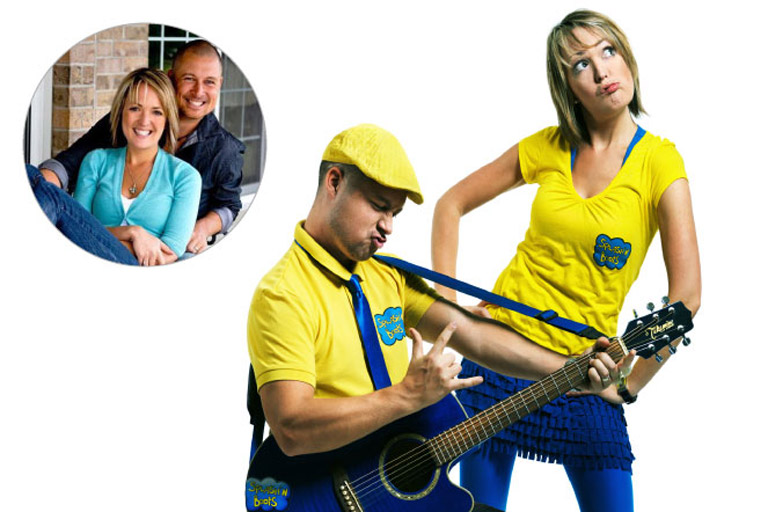 It takes a special kind of person to entertain the toddler set—and a special kind of couple to make a thriving career out of it! But that’s exactly what Nick and Taes Adams (a.k.a. Splash’N Boots) have done. The tune-filled twosome currently star in Treehouse TV’s Roll Play. 2 sat down with these playful performers to get the inside scoop about what makes them tick.

On how they met…
Taes says… We met in a music history class at Queen’s University.
Nick says… I had a girlfriend at the time and Taes had a boyfriend. But it was definitely “attraction at first sight!”

On finally hooking up…
Nick says… About a year after that class, we both got hired to work at a children’s theatre camp for the summer. We spent a lot of time together, and by the end of that summer, we were a couple.

On making sweet music together…
Nick says… It kinda started at the end of that first summer at camp. We started singing together and we were already in the kids market doing children’s theatre. Back at university, we didn’t want to stop, so we took the three songs we had and we performed at local libraries in Kingston, Ont.
Taes says… And then it dawned on us that we could actually do this for a living and not have to get a “normal” job! So we started doing shows between classes.
Nick says… We’d actually skip classes for gigs!

On their stage personas, “Splash’N Boots”…
Taes says… They really are just us. We wanted to look “real” to the kids.
Nick says… Yeah, when we formed the group, we thought let’s just be us–no costumes or crazy characters–just us on stage singing and dancing. So when kids see us offstage, there’s no disconnect.

On getting hitched…
Taes says… We got married in 2005.
Nick says… We were young, but we just went for it! Our wedding was in Prince Edward County (Ont.) in an old barn.
Taes says… Come speech-time at the wedding, neither one of us could stop crying! So, rather than a speech, we decided to bust out in song.

On kids…
Taes says… We both grew up with a lot of kids around. And I’d actually planned to be a teacher, so I love kids. They are just so honest. And spontaneous. And funny.
Nick says… They are truly hilarious!
Taes says… The kids really do make every day special. They are incredible to work with.

On kids (their own)…
Taes says… We don’t have any yet, but they will come.
Nick says… Right now, we’re too busy entertaining everyone else’s kids!
Taes says… But we do have a puppy! So that’s a step in the right direction.
Nick says…Lily is our cocker spaniel poodle puppy. It’s becoming evident that we should have kids soon, because we are pampering this dog way too much!

On connecting with fans of all ages…
Taes says… We are really active on Facebook and Twitter. Most moms and dads use social media, so it makes it easy to reach out to them that way.
Nick says… We actually take emails from our fans and we customize songs for them. Every Monday, we post a new song that was specially written for a real family. We read their email and then sing a song based on their story or request. We get some really fun–and random!–stuff, like going to school for the first time or big, green broccoli monsters!

On kids saying the darndest things…
Nick says… We have a lot of interactive elements in our live show! Sometimes we ask the kids what they want to be when they grow up. We’ve had some great answers–like a mummy or a butterfly!

On their perfect date night…
Nick says… We actually just had the best one this week. We stayed home, made dinner and watched a movie–no phones allowed!
Taes says… Since we are always on the road and we eat out a lot, it’s a luxury for us to just have dinner at home. Our dream is to just put on our pyjamas and cook in our own kitchen!

< Stay Connected With 2life Keep Your Partner Close At Hand >