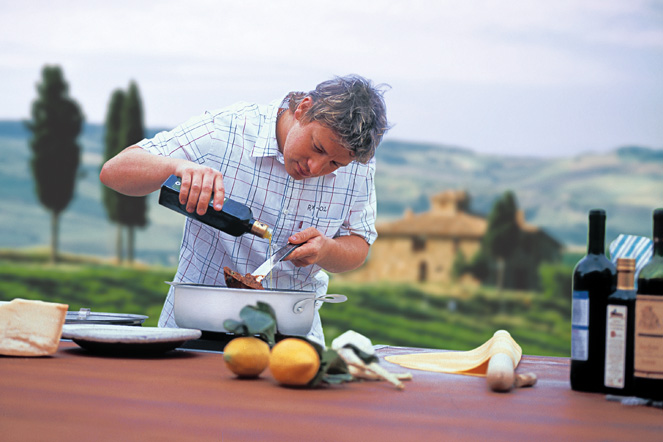 Between his books, TV shows, products and website, not to mention his Food Revolution campaign to make the world healthy, and his restaurant chain Jamie’s Italian, it’s amazing multimedia man Jamie Oliver has time at all to spend with his wife, Jools, and their four children (they are expecting a fifth child in August).

But for Oliver, food and family top his list of priorities–perhaps that’s why he feels such a kinship with Italians. “I love Italy and everything it stands for–especially the wonderful ingredients and the passion that the locals have for their families and their food,” says Oliver, which aligns with his signature approach to cooking: pairing high-quality ingredients with simple preparation.

“It’s not easy when you have so much going on in your life–cooking, eating and getting everyone round the table takes effort, but I think it’s really important to do,” says Oliver, who also understands the kind of time crunch young couples face. “Romantic meals don’t necessarily have to be posh four courses,” he says. “If you use good-quality, fresh ingredients, you can create something quick and easy but delicious.”

Oliver recommends the hunter’s chicken stew, a hearty Italian classic also known as chicken cacciatore, which means “hunter” in Italian. “This is obviously the type of food that a hunter’s wife cooks for her fella when he gets home from a hard morning spent in the countryside,” he says. “It’s really simple to put together but tastes delicious, and it can be cooked in one pan or dish, which saves time and washing up! This is also a great dish for big parties, as it looks after itself in the oven.”

As for setting your own family tradition, “Start by having at least one meal a week when the whole family sits down together and eats a meal,” says Oliver, who likes to get his kids involved in what goes on in the kitchen. “They help me make up salads or breads and play around with herbs. They constantly taste things I’m making, and we talk a lot about the food,” he adds. “Kids aren’t going to be interested in something when it’s just put in front of them on a plate and they’re told to eat it. We need to teach them where things have come from, let them help with the cooking occasionally. Even if they are messing around with a pestle and mortar making big messes, at least they’re getting excited about it!”

In Fall 2016, he is releasing a new cookbook, Jamie’s Super Food Family Classics, that continues with this philosophy, bringing exciting healthy eating to the heart of the home. The book features a fresh, nutritous take on family favorites: sneak in extra veg with Squash Mac ‘N’ Cheese, enjoy a no-arguments family dinner with Chicken Fajitas, Smoky Dressed Aubergines & Peppers, and get ahead with freezer-friendly Jumbo Fish Fingers or Proper Chicken Nuggets. You can pre-order the cookbook now on Amazon.com. 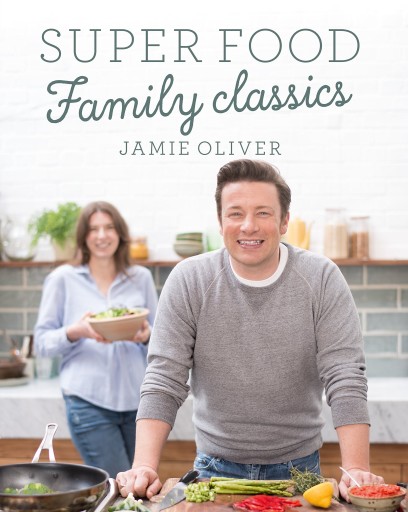